Though the course was short-lived, Father hopes to return in the future 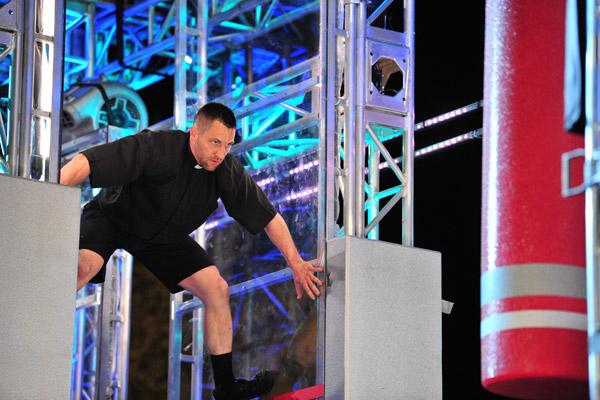 Cooper Neill, NBC
Father Stephen Gadberry prepares to jump to a trampoline on the “American Ninja Warrior” obstacle course March 25 in Dallas. After a bad bounce on the trampoline, he fell in the water.

Cooper Neill, NBC
Father Stephen Gadberry prepares to jump to a trampoline on the “American Ninja Warrior” obstacle course March 25 in Dallas. After a bad bounce on the trampoline, he fell in the water.

Father Stephen Gadberry’s sister, Allison Whittemore, suggested making T-shirts for everyone to celebrate the opportunity to evangelize. The black T-shirts have a white outline of a rosary on the front with “#jesusismyhomie” on the back, a popular hashtag Father Gadberry uses on social media. The shirts are available for $20 in adult sizes, $25 for XXL or larger. Kids shirts are $15. Shipping will be an additional $5.

Proceeds will go toward Diocese of Little Rock seminarians. To order by June 15, message Father Gadberry on Facebook or at frsjgadberry@gmail.com.

Against the backdrop of blinding lights, screaming fans and the midnight sky, Father Stephen Gadberry brought the image of Christ to roughly 5 million viewers in less than four minutes. While leaping on steep, raised blocks, swinging through the air on a horizontal catch-and-release pipe “praying sweet Jesus help me,” he said, and stomping on a trampoline like he was “stomping on the devil,” as one announcer put it, he made history as the first priest to compete on the NBC reality competition show “American Ninja Warrior.”

“It’s really cool in some ways because hopefully it is a trendsetter,” Father Gadberry told Arkansas Catholic the day after the May 30 premiere. “At the same time, it’s kind of unfortunate. The show has been on for 10 years and why are we as Catholics maybe hesitant to evangelize in new ways? … Another challenge for all of us or for the reader is to not be afraid to evangelize in new and crazy ways, even if it’s a reality TV show.”

The show allows competitors to show off their skills on challenging obstacle courses. Those who make it through advance through different levels, until a select few make it to the national finals in Las Vegas. The grand prize is $1 million. The season 10 premiere was the night’s highest-rated show for the primetime networks in the 18-49 age category, according to Variety.com.

Father Gadberry, pastor of St. Mary Church in Batesville and St. Cecilia Church in Newport, competed in the Dallas city qualifier on Palm Sunday, March 25, making it through the first three legs of the obstacle course before falling in the water.

“The whole thing, it was all terrible,” he laughed about the course. “To begin with I was so scared of falling in the water right away because I didn’t want to fall on the first one.”

After completing the “floating steps” and jumping on the rope, “I missed the first swing so I had to go back and do it again. And once I got there, that was almost like a good confession, a weight was lifted off,” he said.

Father Gadberry, who locally adopted the ninja name Father Flex, had to leap from a hanging pipe to a cargo net, barely missing the water.

“Whenever I climbed out of that, I was pumped, I yelled real loud and that got the crowd so pumped up,” he said.

The announcers played along, shouting phrases like “Hallelujah” and “He almost walked on water.” Even in their words, Father Gadberry found a deeper meaning.

“For anyone watching to see a priest or any religious figure, it draws out of us what’s religious. So to see another person that’s spiritual, it draws us to be more spiritual … They saw me as a priest trying to do a holy thing, so they were trying to make holy comments,” he said.

After shinnying across a “spider wall,” a horizontal chimney-like structure, he had to jump on a trampoline, launching in the air to grab “wind chimes,” large hanging objects that resembled punching bags. He said it was only his fourth time jumping on a trampoline like that after trying it three times on a practice course.

It was there, as the announcers shouted, that he was “baptized,” hitting the water and failing to qualify for the next leg of the competition.

His mother, Leslie Gadberry of Wynne, was particularly proud of his optimism.

“He stayed humble the whole time and that’s just Stephen. Everything he does is to be a witness for God,” she said.

He admitted, “a couple days I was beating myself up.”

“It’s not about where I go on the course, it’s about where I’m going in life and I hope to be going to the kingdom, he said.

Father Gadberry is dedicated to CrossFit, as both a trainer and exercise regimen for himself. But his first commitment is to the Lord, ordained a priest in 2016. To get the Church’s message out there and chip away at the stereotype of a priest was the main mission of his TV appearance.

With only about 30 contestant stories aired, Father Gadberry’s story was highlighted first on the two-hour premiere. The introductory video told about his military background, showed him celebrating Mass in Batesville and doing a walking handstand through the church doors. He was exercising in his yard with his dog Murph in the background, but then also explaining what it means to be a priest, saying “I hope to be a good example for all the other young people who see this program to know that priests can be fun, cool ninjas too.”

“I think it was a very honest portrayal of the Church and where the Church is going, especially the Church in Little Rock,” he said. “Just this young vibrant priesthood, this young vibrant Catholicism that goes to Mass, that prays, that has a strong spiritual life, but also that plays with their dog. That runs around in the yard, that walks on their hands, that is not afraid to live.”

While the show was recorded, family, fellow priests and religious from the diocese, friends and three-time ANW competitor Sean Bryan, the “Papal Ninja,” cheered him on. He prayed before climbing onto the start of the obstacle course. He kissed his crucifix and rosary, setting them on the stage before starting his run, wearing black shorts and his clerical shirt.

On May 30, more than 150 parishioners from his hometown of Wynne, Batesville and Newport, gathered for a watch party at the Newport Country Club, first celebrating Mass at St. Cecilia Church.

St. Mary parishioner Melaine Haunert, a self-proclaimed “ninja nut,” who attended the try-out with him, said, “All of us are just amazed at the energy that he has and just how he has taken something so ordinary, of this world, and is using it as an evangelization tool.”

Father Robert Cigainero of Camden, a good friend of Father Gadberry who attended the filming, said, “The way the world is today, people need to see a different side of a priest,” adding that he himself enjoys hunting and fishing with his parishioners. “I think they need to see we’re normal people, we’re not stuck in the church all the time, we have hobbies; we like to do things just everybody else does.”

Since the show aired, Father Gadberry’s followers on Instagram have increased, giving him a way to continue evangelizing.

He may be a ninja one day — “American Ninja Warrior” producers did “express interest in me coming back.”

“If the Lord gives us these opportunities to proclaim the Gospel, be it from the rooftops or from the obstacle tops, and we don’t do it, it’d be silly,” he said.

Father Stephen Gadberry’s sister, Allison Whittemore, suggested making T-shirts for everyone to celebrate the opportunity to evangelize. The black T-shirts have a white outline of a rosary on the front with “#jesusismyhomie” on the back, a popular hashtag Father Gadberry uses on social media. The shirts are available for $20 in adult sizes, $25 for XXL or larger. Kids shirts are $15. Shipping will be an additional $5.

Proceeds will go toward Diocese of Little Rock seminarians. To order by June 15, message Father Gadberry on Facebook or at frsjgadberry@gmail.com.