Bishop Taylor looks back on 10 years of service to diocese

Oklahoma priest is most proud of vocation boom in Arkansas 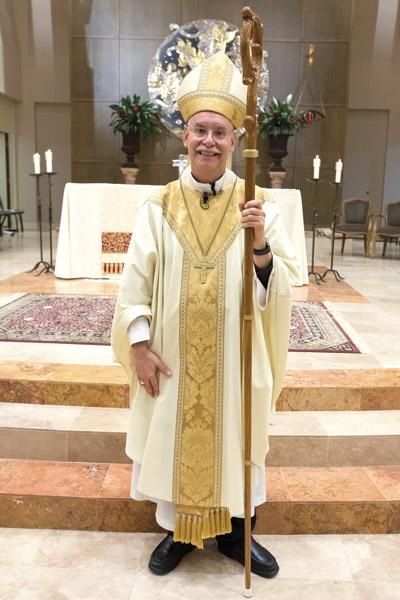 Bishop Anthony B. Taylor’s 10 years in Arkansas have been marked by an awakening to the importance of vocations, care for immigrants, what it means to be pro-life and the life of Blessed Stanley Rother.

Arkansas Catholic sat down May 16 with the bishop to reflect on major highlights of his ministry in Arkansas.

You have been in Arkansas for 10 years now. What has surprised you most about Arkansas Catholics?

"There is no prospect of deporting everybody so are we going to make life miserable as possible for people or are we going to come up with a response to the reality of life here?"

There aren’t things that are surprising to me. What is gratifying to me is how warm and welcoming they are … (Regarding the Diocese of Little Rock) we have eight counties with no Catholic church in them and 34 counties with no resident priest. Living one’s faith requires personal commitment and initiative.

One difference from Oklahoma is the institutional presence of the Church is greater here. A lot more hospitals and schools with a long history to them.

What are you most proud of happening in the past 10 years?

The growth in vocations to the priesthood and the energy and enthusiasm that their youth brings to the life of the Church in Arkansas.

The growth and the way communities have come together that are mixed ethnically, Hispanic and Anglo, forming more and more united parishes. There is still a lot of growth in that area, but people have been welcoming.

Is there anything you are disappointed that has or hasn’t happened?

I am concerned that we are losing a lot of our young people. The influence of the secular society really undermines the faith in a lot of quarters, especially young people who don’t seem to have very much hope for their future. I am concerned about people in their 20s, people who seem to be falling through the cracks.

One of the first things you did in Arkansas was write a pastoral letter, “I Was a Stranger and You Welcomed Me: A Pastoral Letter on the Human Rights of Immigrants,” on welcoming immigrants. How do you think Arkansas is doing now 10 years later?

I think our parishes are places of welcome, largely. There are sad exceptions to that. I think there are lot of welcoming people in the general society in Arkansas. I don’t know that things are much changed here. The rhetoric in the national media is harsh. The effort made when I first arrived here … prevented hostile legislation that had been passed in Oklahoma from not being passed in Arkansas. So I am happy that it didn’t get worse.

In terms of the legal situation for people, it has not changed or gotten worse. There is no prospect of deporting everybody so are we going to make life miserable as possible for people or are we going to come up with a response to the reality of life here?

More recently, you were criticized for not participating in this year’s March for Life. Where do you find the courage to make the difficult decisions?

I remind myself that the only person I need to please is the Lord. I think of the example of Blessed Stanley Rother and doing what was right in a situation that a lot of people can do a lot of second guessing on.

I was very clear and have always been very clear about my support for life from the first moment of conception to natural death. I am very clear that there is no comparison between abortion and other offenses against life. To have that particular speaker (Arkansas Attorney General Leslie Rutledge) there was very inappropriate. To participate in that would seem to endorse things that the Church can never endorse.

What process do you go through when making difficult decisions?

I have a daily holy hour and so I bring it to prayer. I ask God to give me the wisdom to really know what he would want me to do and give me the courage to do it.

Frequently, I know what is needed will displease somebody. I am not in here to be popular. The central symbol of our faith is the cross and Jesus says to take up the cross and follow me and the cross is redemptive. It is self-sacrificing love. That is what Jesus calls us all of us to. People were very upset with Jesus. They didn’t crucify him for nothing, but he spoke the truth and it was the truth that some people were ready to hear.

Truth prevails in the end, and I am confident in that. It has to be rooted in prayer to make sure my own ego isn’t caught up in what is going on.

You were the first episcopal delegate for the canonization cause of Father Stanley Rother. You published your first book on Blessed Stanley and you have given many presentations on his life. You also blessed the first church in the world in his memory. Are there any new insights you have gotten from his life over the past 10 years?

One thing that strikes me is how people are able to connect to various elements of his story and take him as an inspiration for whatever they are having to deal with. To not abandon the flock that the Lord has entrusted to them. To walk by faith. To realize that we don’t know what the future will hold, but to simply do what is asked of us.

One thing people comment on is your grasp of languages. How many languages are you proficient in? When did you know you had that gift?

I just worked hard at it. I got Cs in Spanish in high school (in ninth and 10th grades), and I had one year of Spanish at OU (University of Oklahoma). I was interested in it, but it was a lot of work. It is not like it came easy, at least initially. Once you learn one language, the next language is easier to learn because you know how to learn language. I really wanted to learn it and so I kept at it …

God gives us all the talents we need for whatever he wants us to do, but you have to develop them.

You lived in Oklahoma most of your life. What do you miss most about Oklahoma?

The people I served in parishes there and the guys I used to recreate (play racquetball) with. I am further from my family but Arkansas has become my home. I am getting old so I haven’t played regularly in several years.

What do you like best about living in Arkansas?

It feels like home. I feel very welcome everywhere. The priests here are really united and they get along really well. The parishes I go to are happy places and they are, by and large, happy with their priests. Priests get along with me well. We don’t have any of the divisions that other places have to deal with.

Which saint or pope do you most identify with? Why?

Probably Pope Francis. He is taking things from my playbook. Things that I was saying and doing, we are on the same page.

You were driving a smaller car and living in a smaller place.

It is better that way. Driving an uncomplicated car and living with others. There is a lot more life there opposed to living in a 4,000-square-foot house with a one-car garage alone.

It’s much better (living in the House of Formation). Living in a community of prayer, Mass together, holy hours together, sharing meals together, more of a family feel. I get to know the guys really well and they me, and that is good. I am to be their father, in a certain sense. It is like family.

What are some fun things you get to do? You mentioned you don’t play racquetball anymore.

I take vacations. There are five classmates from seminary that get together for 10 days every August at a lake in Virginia. My family has family reunions at least once or twice a year. I will be going to Colorado for a week with some Oklahoma priests. I drive up to see my dad every six weeks and spend several days with him.