While in the Navy, he sent out ships to rescue Vietnamese refugees 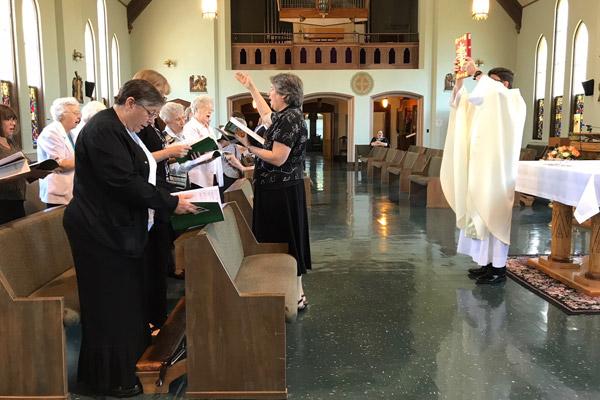 Father Les Farley, chaplain at St. Scholastica Monastery in Fort Smith, holds up the Book of Gospels during his 25-year jubilee Mass May 29 in the monastery chapel with the Benedictine sisters, friends and family.

Father Les Farley, chaplain at St. Scholastica Monastery in Fort Smith, holds up the Book of Gospels during his 25-year jubilee Mass May 29 in the monastery chapel with the Benedictine sisters, friends and family.

On May 29, he celebrated the 25th anniversary of his ordination with Mass, a family luncheon and a public reception at St. Scholastica Monastery.

Father Farley grew up in a Catholic family with four brothers and three sisters. The family moved from Little Rock to Paragould when he was 10, and the parish community of St. Mary Church became a central part of their lives.

“As soon as we moved, we enrolled in St. Mary’s School, where we were taught by the Benedictine sisters of Holy Angels Convent, and I was at an age where I really appreciated it,” he said. “My brothers and I were altar servers, and we all participated in CYO. My mother worked in the parish for about 40 years.”

After high school, Father Farley enlisted in the Navy. During the post-Vietnam-War years, he was assigned to hunt for submarines but found himself searching for Vietnamese refugees in small wooden boats journeying to freedom. When his team found refugees on radar, they tracked them and sent ships out to rescue them. He realized that the life-saving aspects of his assignment gave him the most satisfaction.

“When I left the Navy, a sister from Holy Angels Convent came to our parish and talked about vocations,” Father Farley said. “She told us that even if we had a small spark, we owed it to ourselves to check it out. My pastor referred me to the vocation director who called St. Joseph’s Seminary in Covington, La., and asked if they could take a seminarian on late notice. Before I knew it I was in a taxi to catch a flight to the seminary.”

Father Farley stayed with the Benedictine monks during the summer, directing youth camps, learning building maintenance and woodworking and living monastic life, discovering that he felt called both to monasticism and the diocesan priesthood.

In 2015, Father Farley received an assignment from Bishop Anthony B. Taylor that allowed him to answer the two “calls” he’d heard in seminary. He was asked to serve as chaplain to St. Scholastica Monastery and pastor to St. Leo Church in Hartford. In addition, he celebrates Mass regularly at Mercy Crest, an assisted living center in Barling, and Mercy Hospital Fort Smith.

At St. Scholastica, Father Farley became a Benedictine oblate and renewed his study and practice of Benedictine spirituality. He feels like a “brother” to the 30-plus sisters there.

“I feel invested in their community and would do anything for them, but I see my role as primarily pastoral,” he said.

Because the oldest and most infirm sisters reside in Chapel Ridge Nursing Home, Father Farley brings Communion several times a week and celebrates a Sunday afternoon Mass there.

“When I minister to the sisters at Chapel Ridge, I’m drawn to the vulnerable and innocent, making sure their needs are met,” he said.

“I’ve always wanted to be the kind of priest who is present to the people I minister to, and that includes being transparent and letting them minister to me. I ask God daily to help me see him in the ordinary. People witness to God’s grace and presence and bring so much richness to my life.”

Sister Maria DeAngeli, the monastery’s prioress, expressed gratitude to Father Farley for his three years of ministry there.

“We are grateful to him for his presence among us and for his love and kindness to our sisters at Chapel Ridge Health and Rehab and all of us here at the monastery.”