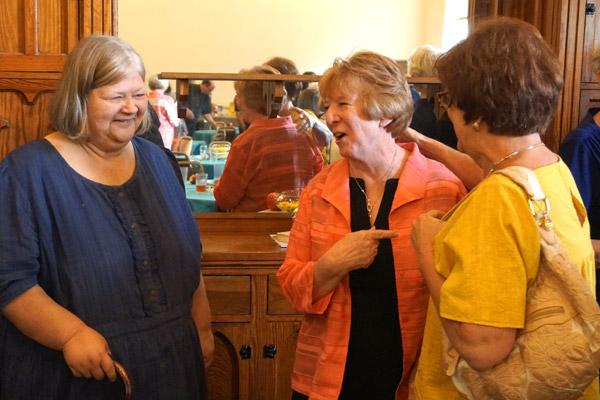 Vernell Bowen arrived her first day in Catholic schools 25 years ago with much to address. As the first lay principal of St. Edward School in Little Rock, she knew she had to operate a little differently than the Benedictine nuns who previously led the school. Teachers needed basic supplies like chalk; there was no secretary to answer the phone, no bookkeeping system and no organized sports. When she wanted to re-start the school basketball teams, she knew she needed to get bleachers first.

But what was lacking in staffing and facilities was made up by the closeness of the staff and ability to spread the Catholic faith throughout the day.

Bowen fell in love with the mission of Catholic schools, spending nine years as principal and her final 16 years in education as the diocesan superintendent. Along with 23 years in the Sheridan School District as a teacher and assistant principal, she dedicated 48 years as an educator.

Bowen is retiring June 30. Her successor has not been named by Bishop Anthony B. Taylor.

Bowen, a native of East End (Saline County), was looking forward to being able to retire from public schools in a few years when she was asked to apply for the principal opening at St. Edward in 1993, When she met with the pastor, Msgr. Scott Friend, she asked to see the school’s budget and standardized test scores.

“My biggest concern was knowing where financially the school was. My son had gone to school there so I knew the academic programs were good,” she said.

She accepted the job. After a couple of years it really sunk in that being able to pass on the faith to Catholic and non-Catholic students was the function that sets Catholic schools apart from other schools.

“Academic programs can be really, really good in our Catholic schools, but we must have that other component of Catholic identity and teaching the Catholic faith,” said Bowen, who became Catholic in 1986.

Bowen was encouraged to apply for the superintendent position in 2002 after Dr. Mike Rockers decided to transition from superintendent to principal of Catholic High.

In his homily June 20 for Bowen’s retirement Mass, Bishop Taylor noted that Bowen often had to deal with difficult situations.

“During this time she has worked hard to help struggling schools stay afloat. She has intervened when schools faced a crisis, more than once taking over the temporary administration of schools that were in trouble. ... She has helped schools address problems that have arisen among their teaching or administrative staff ... She has had to address cases of teachers arrested for crimes — very painful cases of embezzlement, abuse of minors and child pornography — she’s seen it all and worked to bring healing to the schools so sadly affected.  She has worked to bridge conflicts of every sort, including with parents.”

Personally, Bowen said the most difficult conversations she had were when there was conflict at schools.

“The hardest part was when there is a lack of communication between a pastor and principal,” she said. “I try to be that person that gets them to come back together. Sometimes it doesn’t happen.”

She hopes she is remembered for supporting principals, pastors and school staffs and helping improve the schools through more financial sustainability, the lack of which unfortunately was the reason several schools closed over the past 16 years.

The 71-year-old is sad to leave her co-workers, associate superintendents Theresa Hall and Marguerite Olberts, but she is happy to be able to spend more time in her new home in Hot Springs Village with her husband, Deacon B.J. Bowen, venture out on hiking trails across the state and see more of her son, daughter-in-law and granddaughter. She will travel more and maybe even publish the research on black Catholic schools in Arkansas she started 10 years ago for her doctoral studies.

“I think you know it is time for someone else to take the reins,” she said.