Born, ordained in Uganda, priest has been serving in Arkansas for eight years 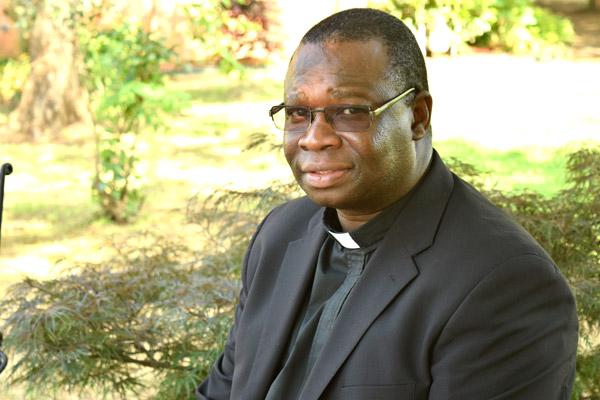 CHARLESTON — As a young boy living in a Ugandan village, Patrick Watikha enjoyed serving in Mass and attending school.

His parents were peasant farmers who could not afford education beyond grade school. Father Watikha’s parish priest, Father Andrew Erp, saw his interest in Mass and education and offered to pay for his Catholic school tuition. Father Erp mentored him for many years and provided an example that eventually led Father Watikha to enter the Apostles of Jesus Minor Seminary in Moroto, Uganda at age 16.

“When my parish priest pulled me on board and supported my education, I was strongly interested and inspired,” he explained. “I said to myself, ‘I think the priesthood is the kind of calling I would love to do and be.’”

Father Watikha was ordained July 3, 1993, in the Archdiocese of Tororo, Uganda, for the Apostles of Jesus. The pastor of Sacred Heart Parish in Charleston celebrates his 25th anniversary as a priest this year.

“I do live my priestly ministry as though nothing is miraculous about it, and at the same time, I live it as if everything about it is miraculous, as inspired by St. Teresa of Kolkata,” Father Watikha said of his jubilee.

Throughout his 25 years in pastoral ministry, Father Watikha’s assignments include numerous roles in both the United States and Africa. From 1993-2010, he was a high school, college and seminary instructor, as well as vocations director, rector, dean of studies and school principal in Uganda.

While serving as a principal at Mazzoldi College in Uganda from 2003-2010, Father Watikha assumed a similar responsibility as his mentor, Father Erp. Just as his parents could not afford Catholic school tuition, many of the families at his school were very poor. As a result, Father Watikha worked with parents so children could continue receiving a Catholic education.

“I encouraged and guided the parents. I told them that there are things that we can do together,” he said.

Bishop Anthony B. Taylor invited the Ugandan native to the Diocese of Little Rock in 2010. Father Watikha spent his first year in Little Rock, serving as the associate pastor of Our Lady of the Holy Souls Parish. He then became pastor of Sacred Heart Parish in 2011.

Father Watikha said he believes that leading souls to God is the most important aspect of his priestly vocation. He bases much of his pastoral ministry on John 3:30, “He must increase; I must decrease.”

“God doesn’t have eyes, ears, arms or legs, but he uses me as an instrument to bring his word to his people,” Father Watikha said. “I want them to understand him, love him and serve him in the way he wants.”

He added that the Blessed Mother and the Eucharist are “the pillars that encourage and strengthen” him in his work.

“The Blessed Virgin Mary … encourages and links us to her son in the Eucharist,” Father Watikha said. “They are inseparable in the way that they bring me closer to what God wants me to do.”

Father Watikha hopes his teaching and example will always lead the Catholic faithful to Christ.

“I would love if they would forget everything about me and remember that Father Patrick made them know God, love God, and become true disciples who know … what God would like us to do in their lives.”