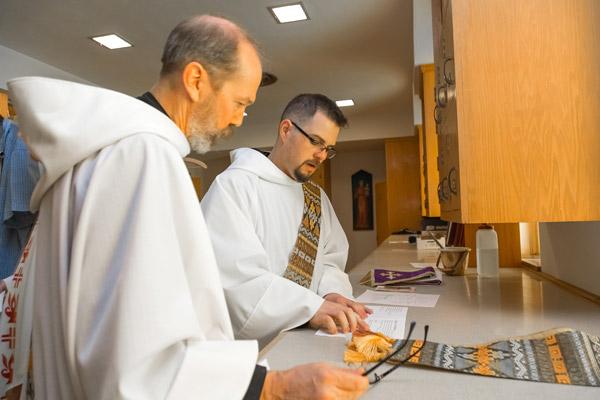 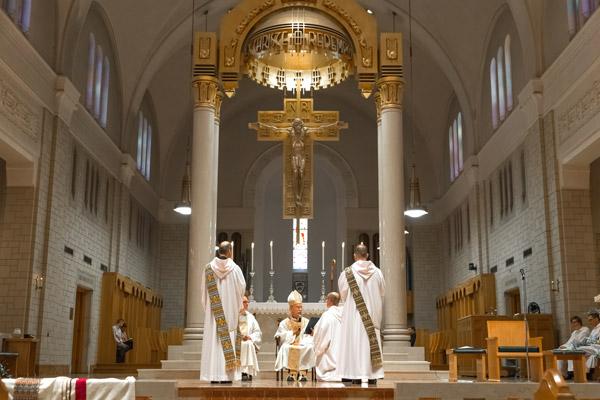 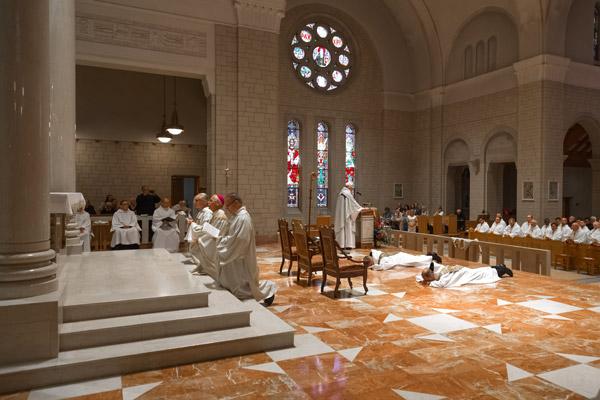 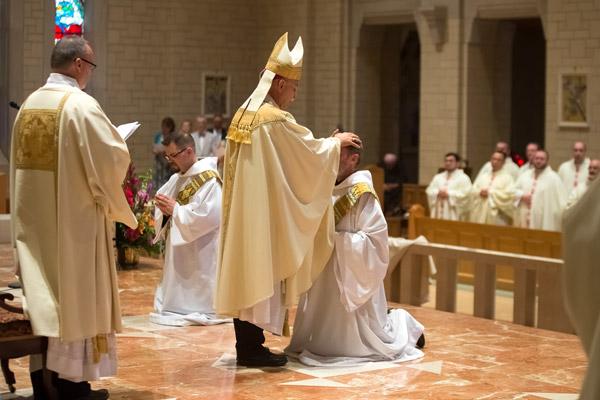 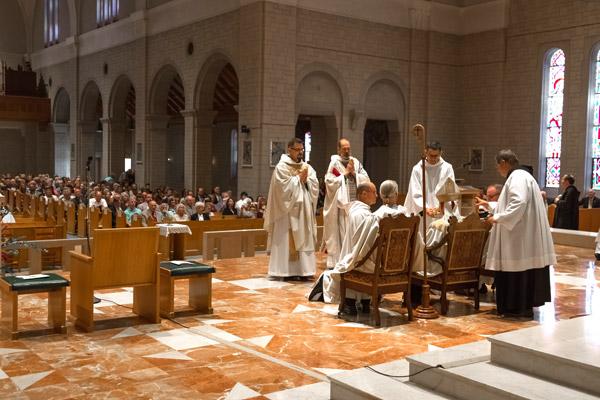 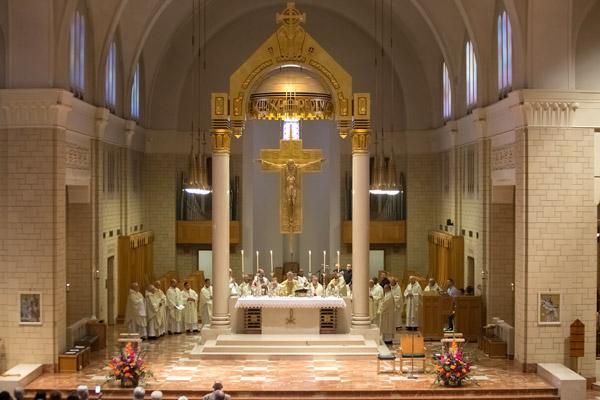 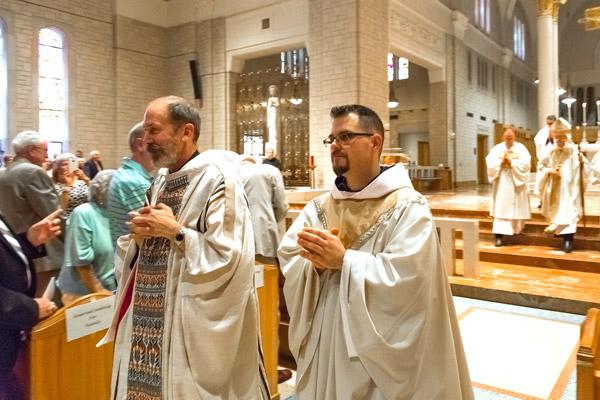 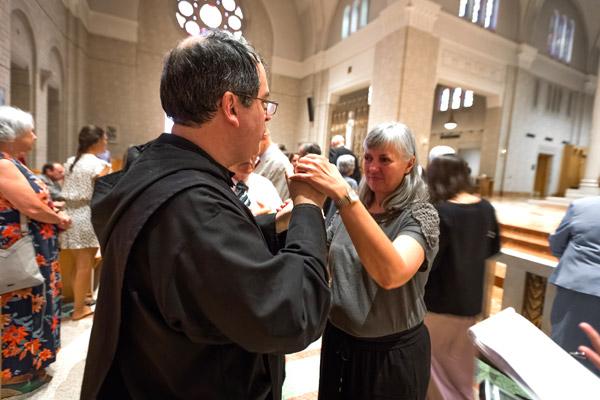 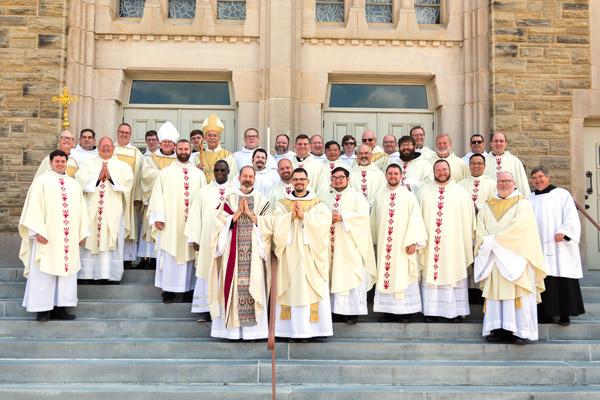 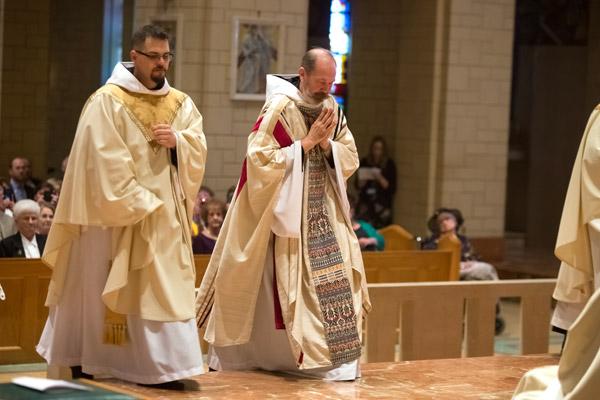 Bob Ocken
After being vested with their priests' stoles and chasubles, Fathers Cassian Elkins, OSB, (left) and Reginald Udouj, OSB, approach Bishop Taylor in St. Benedict Church at Subiaco Abbey during their ordination to the priesthood July 14.

Bob Ocken
After being vested with their priests' stoles and chasubles, Fathers Cassian Elkins, OSB, (left) and Reginald Udouj, OSB, approach Bishop Taylor in St. Benedict Church at Subiaco Abbey during their ordination to the priesthood July 14.

SUBIACO — As Benedictine Brothers Cassian Elkins and Reginald Udouj processed up the aisle at St. Benedict Church at Subiaco Abbey as they had done countless times before, it was a moment of both tradition and the anticipation of a new calling.

It was the same feel of the sanctuary — the same stained-glass windows, the awe-inspiring crucifix suspended above the altar and incense filling the air. But there was an uplifting excitement as parishioners lining the pews had phones raised, taking photos and recording the monks’ march to a new life of service to the Church.

On July 14, the brothers took priestly vows, becoming Father Cassian Elkins and Father Reginald Udouj, making it the first time in 50 years that more than one monk was ordained during an ordination Mass at Subiaco Abbey.

“It was more emotional than I thought it would be,” Father Udouj said, adding that while they are always monks first, the priesthood, “is just another form of service we can offer to our communities.”

“All monks are servants of each other and now you have an additional way to put yourself at the service of your brothers — and indeed of everyone whose paths you cross.” Bishop Anthony B. Taylor

“I’m relieved that everything is over. I don’t think it’s really hit yet, but it’s remarkable. It’s very humbling. I’m excited for the service that I’m able to contribute and serve my community as a priest.

It was Bishop Anthony B. Taylor’s final two ordinations of the year, after eight diocesan priests were ordained May 26 and June 2.

“As Benedictines, your priesthood is sort of a vocation within a vocation. First you were called to the monastic life and then at a certain point the abbot, who stands in the person of Christ, saw a need for additional priests to serve the community,” Bishop Taylor said in his homily, adding it’s not an elevation in status, as “all monks are servants of each other and now you have an additional way to put yourself at the service of your brothers — and indeed of everyone whose paths you cross.”

Both new priests came to Subiaco in 2010, each first living out other callings. Father Elkins, 37, raised in Church Point, La., grew up around the deaf and blind community. He learned American Sign Language at just 6 years old and later became a professional sign language interpreter and independent living skills instructor. He entered the Dominicans of the Western Province, but felt called to Subiaco before making his final vows.

Maria Annis, who has known him since he was a young boy, made the trip from Louisiana with her husband Bob to the ordination.

“He always wanted to be a priest for a long time and now finally he made it and we came to witness that. I feel very happy and very proud of him,” Annis, who is deaf and blind, said through an interpreter. She added of his experience with the deaf and blind community, “he has a tremendous patience with us and he knows what to do with us; he’s a very good guide to access the world.”

In addition to his assignments as abbey sacristan, choir master, teacher and tennis coach for Subiaco Academy, Father Elkins hopes to minister to the deaf community and celebrate a deaf Mass.

Abbot Leonard Wangler said, “We already had a request for Father Cassian to go up into Canada to give a retreat in sign language.”

Father Udouj, 57, grew up in Fort Smith, attending St. Boniface Church and graduated from Subiaco Academy in 1979. After earning a bachelor’s degree, he led a busy life traveling through Arkansas and other states as a manufacturer representative for several furniture companies. He reconnected with Subiaco Abbey and felt at home.

Father Udouj will be an assistant procurator, or business manager, at the abbey.

“His enthusiasm,” is a gift he’ll bring to his priestly ministry, said Abbot Leonard. “Somewhere along the line he bought into this service mentality, which is something all of us are supposed to buy into,” he added with a smile.

Relatives and friends of his from across the country, Washington D.C., to San Francisco, attended the ordination, but none were more thrilled than his parents, Dick and Mary Udouj, parishioners at St. Boniface Church in Fort Smith.

“He has spent a lifetime doing many, many things so I feel like he can hopefully hear God’s words and contribute everything he’s experienced to help this world out,” she said, with her husband Dick adding, “We hear (about) vocations all our lives and I never dreamed … we would have one of ours,” follow religious life. “I can die in peace now.”

While all priestly ordinations have set traditions, like the litany of supplication, investiture with the stole and chasuble and the anointing of the hands, each priest can point to a moment that touches their heart. It’s only fitting since both men share anniversaries of final vows, diaconate ordination and now priestly ordination that the laying on of hands by the bishop and fellow priests, praying over them during the ordination, would be most memorable.

“It was just a sense of peace, finally, right now at this point in this time, this is where I’m supposed to be,” Father Udouj said.

Father Elkins said, “That calling down the power of the Holy Spirit, it was extremely moving and powerful; there were tears shed.”

His mother Dolores Elkins was overcome, hardly able to speak following the ordination.

“Overwhelming, just blessed,” she said as tears streamed down her cheeks.

Sharon Pohlmeier of Paris, the mother of Father Erik Pohlmeier, the diocesan faith formation director, made sure to come over to her, saying, “It will be a blessing for the rest of your life.”

His grandmother, Rita Elkins, 93, who was strong enough to make the trip after initial health concerns, said “It’s the greatest blessing I’ve ever had.”

Msgr. Jeff DeBlanc, pastor at Our Lady of the Sacred Heart Church in Church Point where Father Elkins grew up, said in the past 11 years he’s known him, he’s seen his “heart of gold.”

“He will be a priest of compassion, a priest who has the mind and heart of Christ,” he said.

Father Udouj’s lifelong friend Kenneth Seiter, a parishioner at St. Boniface Church in Fort Smith, was one who received a blessing from him following the ordination.

“It’s a culmination of prayers by his family, his mother and father and all of his peripheral families, this is an answering of prayers. Glad to see his mom and dad able to be here in their advanced age,” he said, adding while trying to hold back tears, “He’s a man with a great heart and that great heart comes from a family tradition of great hearts.”