Benedictine monk marked 60 years as a priest in May 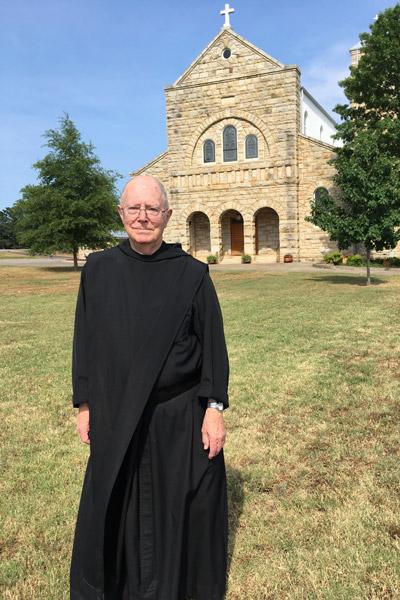 Jacqueline Burkepile
Father Hugh Assenmacher, OSB, stands in front of St. Mary Church in Altus where he is sacramental minister.

Jacqueline Burkepile
Father Hugh Assenmacher, OSB, stands in front of St. Mary Church in Altus where he is sacramental minister.

Subiaco Abbey requested prayers July 12 on its Subiaco Monks Facebook page and reported that Father Assenmacher received a potentially serious head injury with severe bleeding from a fall and was admitted to a hospital in Fayetteville. A July 15 post on the same Facebook page said he was still in ICU but showing signs of improvement.

On July 24, the abbey posted on Facebook that he had contracted pneumonia. Father Assenmacher died at 3:45 a.m.

ALTUS — Every morning at 6:30, Father Hugh Assenmacher, OSB, opens St. Mary Church in Altus to pray. The historic church that sits on a hilltop and overlooks miles of natural scenery allows the parish’s sacramental minister to peacefully pray and meditate daily.

Father Assenmacher, a retired Benedictine monk from Subiaco Abbey, was born in Billings, Mo., on Feb. 16, 1933. He attended high school at Subiaco Academy and entered the abbey one year after he graduated. He was later ordained at the Cathedral of St. Andrew in Little Rock on May 15, 1958, by Bishop Albert Fletcher. He celebrates his 60th jubilee as a priest this year.

For 46 years of his priestly ministry, Father Assenmacher taught multiple subjects at Subiaco Academy, including history, Latin, religion and music. He was also the monastery’s organist, novice master, archivist and lawn keeper.

“For several years, I was the novice master and trained the guys joining the monastery,” Father Assenmacher explained. “My specialty was also sitting on a power lawn mower … that’s what I kind of became famous for.”

For 56 years as a priest the Benedictine monk had never had a parish assignment. Then in 2014 he became the sacramental minister in Altus. He celebrates Mass and the sacraments, and ministers to the Catholic faithful. He explained that when entering the priesthood, he never desired to serve as a parish priest. However, four years ago, Abbot Leonard Wangler, OSB, asked him to assume the role of sacramental minister at the Altus parish.

“I was kind of retired from teaching, and one day at lunch, the abbot tapped me on the shoulder and asked me to drop by his office sometime,” Father Assenmacher said. “When I went to his office, he asked, ‘How about going to Altus to be the sacramental minister?’ My jaw dropped.”

Father Assenmacher said he enjoys serving at the rural parish, explaining that “the people around here are very supportive of their pastor,” and that he has befriended many of his parishioners.

“I think all pastors feel this way — they see the goodness in people,” he said. “They are very faithful Catholics, and this is encouraging.”

While serving as the sacramental minister, Father Assenmacher also teaches novices at the abbey two mornings per week. Even though he has appreciated his time in Altus, the retired priest said that he is “being called back to the abbey in August.” He will resume his role as the monastery’s organist and archivist.

Father Assenmacher also explained that he hopes his example of the practice of stability throughout his ministry inspires others to do the same.

“I would hope that staying in the same general area for 60 years and doing the same kind of work is an example in a day in which we don’t have much stability,” he said.

Father Assenmacher added that praying the Liturgy of the Hours and his devotion to the Blessed Mother strengthen him in his pastoral work.

“The monastery sets times where everybody comes to the church and prays the Liturgy of the Hours. This has been a strong point for me,” Father Assenmacher explained. “I also come from a community, historically, where we are geared towards the Blessed Virgin.”

He also said that genetic makeup helps him to remain in ministry, even at the age of 85.

“Both of my parents were in their 90s when they died. This may be a curse, but they were not sitting around,” he said. “I have an older brother in his 90s and he is very active. It’s not so much that I’m determined to do this, but I still can do it.”

Subiaco Abbey requested prayers July 12 on its Subiaco Monks Facebook page and reported that Father Assenmacher received a potentially serious head injury with severe bleeding from a fall and was admitted to a hospital in Fayetteville. A July 15 post on the same Facebook page said he was still in ICU but showing signs of improvement.

On July 24, the abbey posted on Facebook that he had contracted pneumonia. Father Assenmacher died at 3:45 a.m.