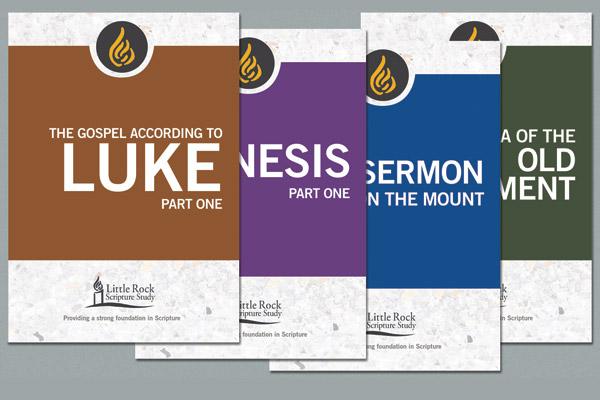 • Mid-August: “The Gospel According to Luke,” Parts One and Two

• December:
“The Sermon on the Mount”
“Genesis, Parts One and Two”
“Panorama of the Old Testament”

Director Cackie Upchurch said the ministry has gotten feedback from Catholics who want to study the Bible but have less time. In response, the “reimagined” program will be introduced with revised edition of the study of the “Gospel of Luke,” which will be proclaimed during Masses in the new liturgical year.

In December LRSS will publish a new study, “The Sermon on the Mount,” as well as revised studies of “Genesis” and “Panorama of the Old Testament.”

“Over the years we have always updated our materials,” she said. “In recent years we have been very aware that more and more people want to engage with the Bible, but they have less and less time. They also want efficient ways to get the materials.”

Previously, each study set had a study guide, commentary and videos/audio lectures that could be purchased separately by the parish. The new studies will feature one book with all the necessary elements combined. Maps and other insights from the Little Rock Study Bible are incorporated throughout the studies. Videos/audio wrap-up lectures are available free online for users to watch during the Bible study or at home.

All studies will be four to six weeks long. Longer studies like Luke, which was 11 sessions, will be divided into two parts.

“The longest commitment that people will have to make in any of our studies is six weeks,” Upchurch said. “We aren’t trying to dumb down or over-simplify what we offer. We have access and make use of the scholarship of 30 to 40 Catholic theologians. There isn’t any other Bible study out there that gives access to that many respected Catholic biblical scholars.”

Upchurch said LRSS felt strongly that the wrap-up lectures after each session were important for everyone to watch or listen to so they wanted to make sure limited budgets didn’t prevent parishes from purchasing them. For parishes that don’t have an internet connection, DVDs can still be purchased for a small fee.

Over the next two years Upchurch said most of the studies in English will be revised to this new format.

“During the transition, the materials in the old format are still available,” she said.

LRSS organized focus groups in the United States and Canada to test the new format. Some were current users, some were former users and some had never used LRSS before, she said. These groups provided overwhelmingly positive feedback.

Beginning in mid-August the study of Luke will be available at littlerockscripture.org or from online or local booksellers. Ebooks will be sold for $12.99 and paperbacks will be $16.95 each with bulk pricing also available.

In addition to the revised studies, LRSS is continuing to publish new titles in its Alive in the Word series. These smaller books are used to enhance biblical spirituality. New volumes introduced are about mobility, new beginnings, Christmas and Advent. Twenty-one titles are available in all.

“Where do we find God in these situations and what does the Bible teach us?” Upchurch said. “And how do we respond? It includes prayer and action steps.”

Alive in the Word books are ideal for a day of reflection, a three-week study in a parish or done at home alone or with a family member or friend. Each session lasts about one hour, compared to a Bible study session that is usually 90 minutes.

Each Alive in the Word volume is $7.95 with bulk discounts available.

• Mid-August: “The Gospel According to Luke,” Parts One and Two

• December:
“The Sermon on the Mount”
“Genesis, Parts One and Two”
“Panorama of the Old Testament”