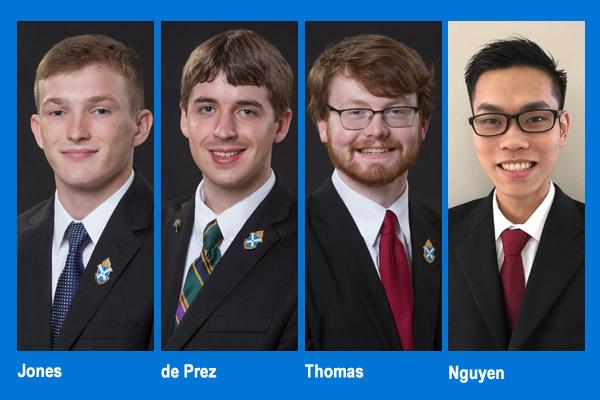 Four men joined the Diocese of Little Rock as seminarians this fall.

• Joseph Jones, 18, a member of the Cathedral of St. Andrew in Little Rock. He is the son of Thomas and Laura Jones.

• Thomas de Prez, 19, a member of Immaculate Heart of Mary Church in North Little Rock (Marche). He is the son of Joseph and Joanne de Prez.

• Quinn Thomas, 18, a member of Blessed Sacrament Church in Jonesboro. He is the son of Del and Suzanne Thomas.

• Minh Phong Nguyen, 22, a member of St. Patrick Church in North Little Rock. He is the son of Phong Van and Lan Thi.

All four men will study at the House of Formation in Little Rock and take classes through the University of Arkansas - Little Rock.

• Tuan Do of North Little Rock

In 2019 two seminarians, Miskin and Amaro, are scheduled to be ordained to the priesthood.

The number of seminarians is at its lowest level since 2006. At its peak in 2014 the diocese had 46 seminarians but now has 22. The drop is attributed to having nine seminarians ordained between December 2017 and June 2018.