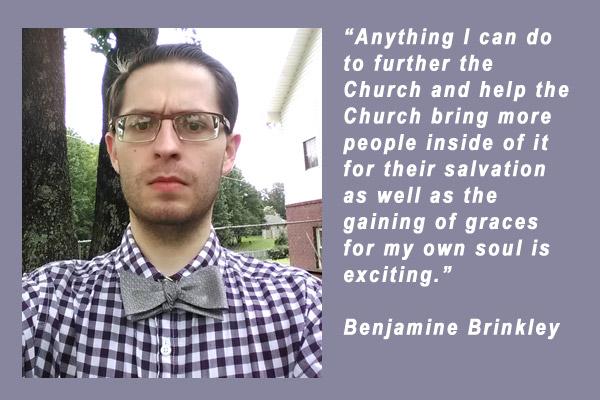 Besides a church, where do you connect with God the most?

“I like to go to cemeteries. They’re full of history and people’s experiences and people just don’t do it as they should in western countries anymore … people only ever go when they’re interring someone.”

When Benjamine Brinkley was greeted before Mass at Blessed Sacrament Church in Jonesboro, he explained to then-pastor Father Jack Vu, “I’m here observing.”

“After that first Mass I was just there every Sunday,” the 27-year-old said, converting to Catholicism from his Southern Baptist roots six years ago. “… It’s the tradition and the stability of the Church. It’s the only one that can really trace itself to Christ.”

He graduated with a bachelor’s degree in interdisciplinary studies, focusing on history, from Arkansas State University in 2015.

“To tell you the truth, I had a completely funny view of the Church” before converting, he said, explaining he had a “pre-Vatican II” view, complete with Gregorian chants. Now, “I find that I’m extremely attracted to the extraordinary form (of the Mass).”

Brinkley, who works at Walmart, is a sacristan on Wednesdays at Blessed Sacrament and serves as a lector, usher and sometimes as an extraordinary minister. He recently became faithful navigator for the Knights of Columbus Council 1702, which directs meetings and sets agendas.

“Anything I can do to further the Church and help the Church bring more people inside of it for their salvation as well as the gaining of graces for my own soul is exciting,” he said. “You’re in the antechamber of the throne room of heaven when you’re in Mass.”

He enjoys being a lector, as it is “the closest I can get as a lay person to preaching.”

Brinkley is discerning a call to the priesthood, saying, “To be a priest is the most awesome profession in existence. It’s a profession established by our creator for the service of his people.”

Brinkley said he enjoys collecting stamps and coins. Gardening, he admits, is more of a “penitential act” than relaxing, always “fighting off weeds.”

Besides a church, where do you connect with God the most?

“I like to go to cemeteries. They’re full of history and people’s experiences and people just don’t do it as they should in western countries anymore … people only ever go when they’re interring someone.”

Click for the 15 Catholic young adults who inspire us, 2018 index