Touched by the Holy Spirit, she chose a new vocation in 1988 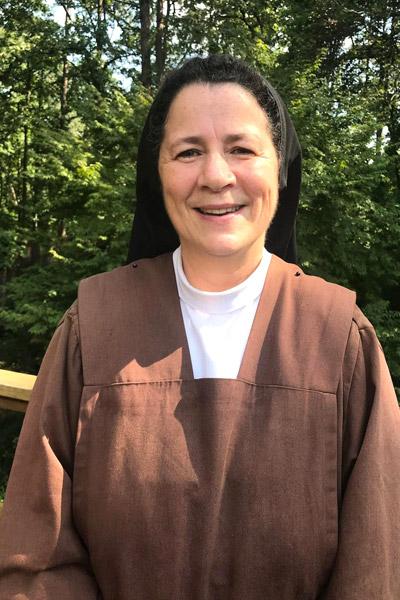 Sister Lucia Ellender, OCD, became prioress of the Carmel of St. Teresa of Jesus in Little Rock when she was elected by the Discalced Carmelite sisters July 26.

Sister Lucia Ellender, OCD, became prioress of the Carmel of St. Teresa of Jesus in Little Rock when she was elected by the Discalced Carmelite sisters July 26.

While William Shakespeare famously said in part that “some have greatness thrust upon them,” Sister Lucia Ellender can easily replace “greatness” with “holy leadership” to fit her new reality.

Admittedly, she “went numb” when her fellow 13 sisters elected her as the next prioress of the Discalced Carmelite Nuns in Little Rock July 26.

“I wasn’t expecting it; it was a total surprise to me,” the 59-year-old prioress said. “I do feel the Holy Spirit working very, very much and I know he’s going to help me to get through this, to guide the community in whatever way he wants me to.”

“I imagine God called me because I don’t know what I’m doing and he can just work through that.” Sister Lucia Ellender, prioress of the Carmel of St. Teresa of Jesus

“She said it’s not an easy job and I knew that. I’m just doing the best I can. I imagine God called me because I don’t know what I’m doing and he can just work through that,” she said.

Growing up in Houma, La., then Nancy Ellender was the ninth of 13 children. She attended Catholic schools taught by religious sisters, graduating as a boarding student from the Academy of the Sacred Heart in Grand Coteau, La.

“My mother was very devoted to the Blessed Mother. She didn’t say much, but she just was — that was a very strong influence on me,” Sister Lucia said. “My father was too. He was a doctor and he worked at a hospital, and the nuns were at the hospital. He would bring me to the hospital to get art lessons from a sister at the convent there, and I remember those days very well.”

She earned a degree in architecture from the University of Louisiana in Lafayette, landing a job at an architectural firm. Her life changed in 1984 after a conversion experience at a retreat.

“I had just built a house and I had a car, I had everything I had kind of dreamt up as a child. And it was like, ‘what’s next?’” she said, adding she bargained with God to “make things happen” if her calling was real.

“I was touched very much within by the Holy Spirit and I began to see things very differently. I was planning on my career as an architect; I had a good job and everything … at the same time I felt this longing to give myself totally to God.”
She entered the Carmel of St. Teresa of Jesus order in 1988, with first vows in 1991 and final vows in 1996.

“I read St. Teresa (of Avila) and it was her writings, it was like this was it. I really didn’t want to go anywhere else,” she said.

“I would have to say I don’t have any regrets and happiness has grown over the years … I did struggle very much at first,” she said. “I could see it was definitely the Holy Spirit working in my life.”

She has served a variety of roles with the contemplative order, including upkeep of the monastery and its property, laundry and preparing the altar breads.

Sister Lucia has served as one of the three members of a council who consult the prioress. One of her tasks as prioress will be to lead her community to update their constitution, which she described as having “everything we need in them to live our life.”

In 2016, Pope Francis issued Vultum Dei Quaerere, (“Seeking the Face of God),” which included new rulings and mandates for contemplative orders of nuns, according to a Catholic News Service article. On May 15, the Vatican released Cor Orans, (“Praying Heart”), with follow-up instruction for implementation, the article stated.

“It’s a beautiful document, the spirit of it is beautiful, and we have to do the practical points. I hope I can help in that,” Sister Lucia said of revising or updating portions of their constitution, adding she hopes the “voice of the community will come out. It’s not what I want but it’s all together.”

As prioress, Sister Lucia said her main task is to be “available for the sisters.”

“That includes everything … I still have the jobs I had in the past,” she said, but added she’s training other sisters on some tasks.
While always open to serve God in whatever way she can, Sister Lucia said she hopes the Holy Spirit continues to guide her as prioress.

“God’s just going to be giving me the help I need to do this,” she said.