Hall and Dobbins say roles as teachers, principals helped prepare them for administration 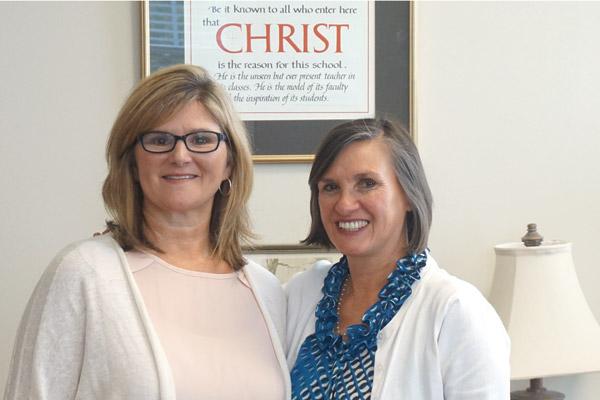 Aprille Hanson
Theresa Hall (right) has been named the new superintendent of Catholic Schools and Ileana Dobbins named an associate superintendent Aug. 13. Both women have a background as teachers and principals.

Aprille Hanson
Theresa Hall (right) has been named the new superintendent of Catholic Schools and Ileana Dobbins named an associate superintendent Aug. 13. Both women have a background as teachers and principals.

New leaders at the helm of the Catholic Schools Office can relate to the principals and teachers they serve because they’ve been in their shoes. While the office had 16 years of leadership with superintendent Vernell Bowen, who retired in June after a career in education spanning 48 years, including time as a teacher and principal, recently hired superintendent Theresa Hall will carry on the tradition.

A parishioner of Our Lady of the Holy Souls in Little Rock who is married to Deacon John Hall, she was principal at St. Edward School from 2002 to 2009. She was previously a teacher at St. Edward and at St. Patrick School in North Little Rock from 1983 to 2002.

“One thing that she always taught me I would say, and this was even when I became principal, to just be a good listener and then respond to what really is being asked to do. Being a good listener makes all the difference in the world,” Hall said of Bowen.

Ileana Dobbins (pronounced “ill-e-ANna”), who recently resigned as principal of Our Lady of the Holy Souls School in Little Rock, was hired as associate superintendent. She served Holy Souls for 15 years as principal and had previously been an assistant principal, teacher and counselor. She has been serving on the Arkansas Non-Public School Accrediting Association (ANSAA) board as well.

Bishop Anthony B. Taylor announced the hirings Aug. 16. Marguerite Olberts will continue as associate superintendent for marketing and public relations.

“I have such respect for Theresa and Marguerite,” Dobbins said, adding “I’ve called them both at different times for advice … so to get to be a part of that team is huge for me.”

Currently, Hall said the office is in the middle of working on annual reports for the schools, comparing data like enrollment and staffing to past years.

“We also look at how we can help those schools in whatever needs they might have,” Hall said.

But after a change in leadership after so many years, evolution in both the position and what’s expected in the years to come is natural.

“I’m hoping there will be growth in the schools. I see where schools are going to have to either have a development person or somebody that’s really in charge of raising money, marketing the school if they don’t already. I see that as being a very important step that needs to happen for all of our Catholic schools,” Hall said of future goals. “I know we do want to look at our diocesan policy manual this year with the diocesan school board and make changes and adjustments to that.”

Hall said she also hopes to focus on teacher retention and Catholic identity.

“I think we’re going to have to continue to build on that Catholic identity because for one thing, we’re having some students that are not Catholic, more and more teachers are not necessarily Catholic, we try to hire somebody that’s Catholic if they’re qualified, but also being able to retain our teachers that we want to retain and our students we want to retain,” Hall said.

Dobbins said that she believes her recent experience as a school principal will be an asset, allowing her to relate.

“We had one (principal call) recently and I had the same situation so I could tell her kind of what I did and she could figure out how she wanted to do that. But just being able to have that experience and have it recently I think is a benefit … I want to be that support system for them when they need it. Just to know if they need to talk through something with someone else that we are here to support them and help them,” Dobbins said, adding she’s excited to learn about the 27 Catholic schools in the state.

Because Hall, Olberts and Dobbins have all been in the trenches of Catholic school life beyond administrative roles, they consider themselves the “Three Musketeers.”

“We’ve experienced all of that so we can bring that as a whole and I feel like really all three of us can answer most questions that any principal might have,” Hall said. “We can bounce things off each other and say, ‘This is what I did, is this is what you’d recommend?’”

While Hall admitted time is necessary to see what real changes need to happen, the focus will always be “how important Catholic school education is for students.”

“We also support our families. It’s not just the student itself, it’s the families. When you go into these schools and you see principals talking to parents, you can tell it’s true from the heart it’s not just ‘I’m telling you as a principal,’” Hall said, while Dobbins added, “I think that’s one gift of Catholic education is you get to know your families. It’s not ‘I’m in the glass tower’ — you know those kids, you know their families. You celebrate with them and you grieve with them when it’s time.”

Praise for school staff, parents who made school year work