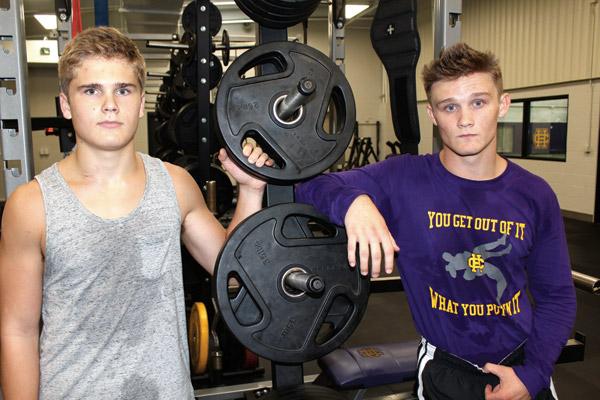 Catholic High wrestling coach Paul Mammarelli’s voice pops like a firecracker amid the dull thud-thud-thud of wrestlers’ feet running laps on the mat. On command, 20 bodies go prone, then pop back to their feet.

Wrestlers shoot their legs out in front of them, landing flat on their backs, then scramble to their feet. The more conditioned do the move smoothly; newcomers flail for air and footing. Then, thud-thud-thud, through the last quarter of the first practice of the year.

The Roset brothers, Jacob and Kennet, are two of the smooth ones. They’ve been through Mammarelli’s tortuous conditioning drills before and keep up with every bark, dropping down, popping up, face down, face up, tonight up to 20 times in a row. They look as though they can keep this up all night and make first bell tomorrow besides.

Jacob, 17, is fast, gliding through his laps. Kennet, 16, the larger little brother, moves with purpose and palpable intensity. Both know where the other is at any given moment and both know the other’s strengths and weaknesses intimately.

“He’s really strong and dominant and he’s not moved,” Kennet says of his brother. “Like when they’re standing up, he’s the one who always moves his opponent. He’s fast. If he gets put to ground, he just gets back up right away.”

“Kennet’s really quick with his moves,” Jacob said. “He’ll take a shot on you if he gets that and he’ll get it. He’s also really strong. Last year he was 132 pounds, now he’s heavier than me, doing the same weights and stuff. So he’s just as strong as I am.”

Both young men are coming off excellent showings at last year’s state tourney. Jacob was runner-up in the 152-pound weight class in his third straight trip to state. Kennet was fifth at 138 pounds in his first state championship showing. Both enter the season with even higher aspirations than that.

“I’m definitely looking for first in the state,” Jacob said. “A personal goal is, I want to be undefeated this year. Last year I lost, like, four matches out of 49, 50, something like that. I think I have a chance to go undefeated this year and that would just be amazing to put on college resumes and all that, undefeated senior year.”

“My freshman year was kind of iffy, just going through trying to do my best. Didn’t win that much. But my sophomore year I kind of got the hang of it, started winning more consistently,” Kennet said. “(This year) individually, I want to shoot for top three, preferably first. As a team I think we can make top 10 in the state.”

The Roset brothers’ rapid rise in the sport starts with letting no moss grow under their feet in the weight room, even in the summertime. Kennet came into this year 30 pounds heavier, the sum of growth spurt plus endless reps. Jacob’s obsessive training regimen not only paid off on the mat, it led him to top individual honors nationally as part of Catholic High’s Physical Fitness team. But for all the brawn, both grapplers say brains is the secret of their success.

“I’d say wrestling is 85 percent mental,” Jacob said. “You have to be able to get it into your head that you’re going to win before you even get on the mat or you’re just not going to do well. It doesn’t matter who you’re going against, you have to put 100 percent effort into it no matter what.”

To that end, it doesn’t hurt to grow up in a family of five boys and have one of your chief rivals across the dinner table every night.

“Growing up with four brothers, it keeps you competitive,” Jacob said. “I was always in sports and stuff and just doing whatever you can to be the best you can. But sometimes being the best you can isn’t what you want. You want to be better than others and that’s just what’s driven me. I’ve always had that competitive spirit, I guess.”

Even though they wrestle in separate weight classes, indirectly, the competition never stops. Asked who’d win a Roset intramural match, both boys smile, but just barely.

“I think I’m the winner on that one,” Jacob said.

Countered Kennet, “I’m not going down without a fight.”