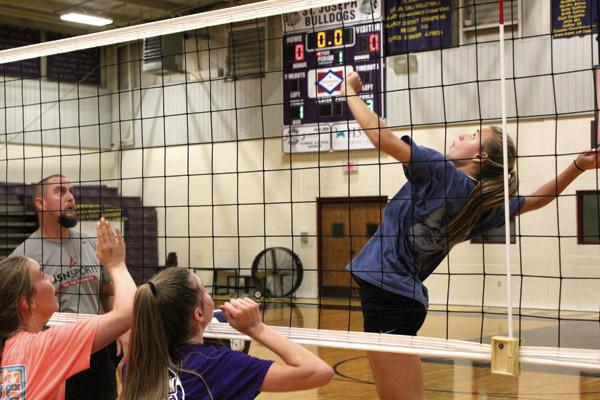 Dwain Hebda
Mattie Elsinger, St. Joseph High School senior (right), tees up a spike against two defenders at a recent practice. Elsinger is one of four varsity seniors on the Lady Bulldog squad in Conway.

Dwain Hebda
Mattie Elsinger, St. Joseph High School senior (right), tees up a spike against two defenders at a recent practice. Elsinger is one of four varsity seniors on the Lady Bulldog squad in Conway.

CONWAY — St. Joseph High School’s Lady Bulldogs had a scrapbook season last year, winning the conference title and their first district crown in four years. The only mar on the Conway school’s otherwise perfect season was being denied a trip to the state finals by Hoxie High School.

This year’s seniors are looking to fill in that blank on their resume.

“We have improved on passing,” said Mattie Elsinger, in her second varsity season as an all-around player. “I know last year we did good on that, but I feel like this year we have a lot more passers. We still need to get our serves over. Of course, that’s like every year we need to work on that.”

Elsinger and Roach, who’ve spent their entire upbringing at St. Joseph, are joined by Bailee Atkinson, center, and Chloe Denton, all-around, who each joined the school in eighth grade. Together the quartet share the mantle of leadership on a varsity squad that also includes two juniors and a fast-learning sophomore and a JV that’s dominated by freshmen.

“I feel like, as seniors, we need to try hard and help the younger girls know exactly what they’re doing,” Denton said. “My goal is to just get better and help my teammates to be where we want to be at the end.”

Coach Luke Davis, now in his 12th year at the helm, said leadership from the top is an invaluable part of team chemistry.

“Every year, I really talk to my seniors and I try to really push that this is their team,” he said. “I try to push that communication is a big part of it. They have to talk to me and then from what they’re telling me, I make adjustments. I tell them, I can’t play anymore, it’s all about them.”

Davis said the varsity squad features decent experience and all the individual skill pieces for a world-beating year, but noted the team is still trying to find a consistent formula for success.

“We’re still trying to find ourselves as far as what we’re really good at. We’re trying to be good at everything, trying to be a complete team,” he said. “Right now our passing is really good at times and then we can still struggle. Our offense, my two big middles, we’ve got quite a bit of height there. They’re definitely a strength. A couple of better blockers that we have around, they’re definitely a strength.”

The four seniors said they were looking forward to their final campaign.

“I think we’re all just such a family unit here. We just, like, know everyone’s names from kindergarten up and all the teachers support us,” Atkinson said.