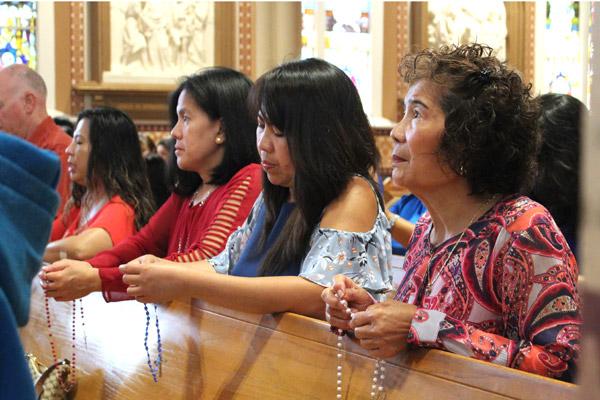 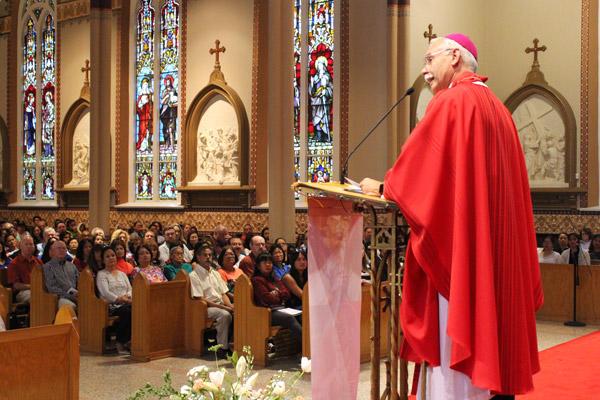 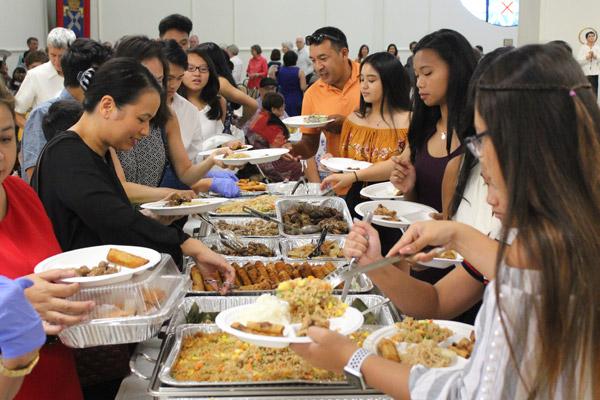 Mass in their native language at the Cathedral emotional for parishioners 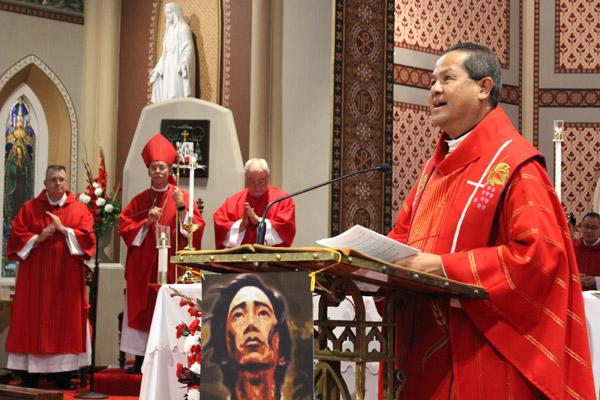 Dwain Hebda
Father Elbert Fadallan, of Holy Family Parish at Little Rock Air Force Base in Jacksonville, thanks organizers of the celebration of Filipino martyrs Mass and dinner Sept. 16, which included celebrant Bishop Anthony B. Taylor.

Dwain Hebda
Father Elbert Fadallan, of Holy Family Parish at Little Rock Air Force Base in Jacksonville, thanks organizers of the celebration of Filipino martyrs Mass and dinner Sept. 16, which included celebrant Bishop Anthony B. Taylor.

Filipino-American Catholics turned out in droves for a Mass honoring their nation’s two patron saints at Cathedral of St. Andrew in Little Rock.

The Sept. 16 event was concelebrated by Bishop Anthony B. Taylor, Father Elbert Fadallan of the Little Rock Air Force Base and other priests from around the diocese. The standing-room-only Mass and accompanying dinner was hosted by the Filipino-American communities of Little Rock and Tulsa, Okla.

Wearing bright red vestments, the celebrants commemorated the sacrifice of the country’s only two saints — 17th century martyrs St. Lorenzo Ruiz and St. Pedro Calungsod. The bilingual service featured music and prayers in Filipino, a visibly emotional experience for many in attendance.

“It’s really, really exciting to see the expression of faith and at the same time hearing those beautiful voices speaking in our native language, just to celebrate the martyrdom of our two Filipino saints,” Father Fadallan said. “Exciting times. It’s beautiful to look forward to continuously celebrating our faith, wherever we are.”

St. Lorenzo Ruiz was born in 1600, died in 1637 and canonized in 1987 by St. John Paul II. As an altar boy in his home church in Binondo, Manila, he was educated by Dominican friars, then later married and had three children. While working as a clerk in the Church, St. Lorenzo Ruiz was accused of killing a Spaniard. He sought asylum in Okinawa, an ill-fated move as it timed with a period of Japanese persecution of Christians.

Two years’ imprisonment was followed by trial and torture in an effort to force him to renounce his faith. He famously said, “I am a Catholic and wholeheartedly do accept death for God.” St. Lorenzo Ruiz’s feast day is Sept. 28.

St. Pedro Calungsod was born in 1654, died in 1672 and canonized in 2012 by Pope Benedict XVI. He was selected to accompany a missionary delegation to what is now the Mariana Islands. There, he converted people to the faith from among the Chamorros, a population known for their violent tendencies.

After the Chamorros’ chieftain’s wife and daughter were baptized, rumors began to spread that the baptismal water was poisonous and the Chamorros attacked the delegation. St. Pedro Calungsod was among those struck down. His feast day is April 2.

“It’s a beautiful truth to learn that in the light of our Gospel this Sunday (Mark 8:27-35), that our salvation comes through the cross,” he said. “There is no way around it, there’s no shortcuts about it but, like our Filipino martyrs, to embrace the cross. It behooves us to learn that.”