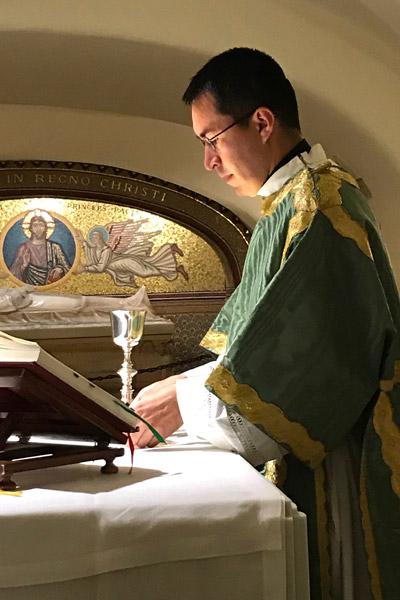 Seminarian Martin Amaro of Little Rock serves at his first Mass as a deacon Sept. 28 in St. Peter Basilica at the Vatican. Archbishop Jorge Carlos Patron Wong of Mexico, who is in charge of seminarian formation at the Vatican, was the celebrant.

Seminarian Martin Amaro of Little Rock serves at his first Mass as a deacon Sept. 28 in St. Peter Basilica at the Vatican. Archbishop Jorge Carlos Patron Wong of Mexico, who is in charge of seminarian formation at the Vatican, was the celebrant.

At the Altar of the Chair in the Basilica of St. Peter at the Vatican, Martín Alejandro Amaro Rodriguez was one of 40 seminarians taking the next step in his priestly journey.

“The most powerful moment was during the Litany of Supplication, it is when the Church on earth joins with the saints in heaven to beseech God on behalf of the elect, who prostate themselves in a gesture of humility and supplication,” Deacon Martín Amaro said in an email interview.

“I can’t wait to help people be closer to God,” he said.

On Sept. 27, Diocese of Little Rock seminarian Amaro was ordained to the transitional diaconate while studying at the Pontifical North American College in Rome. Cardinal Daniel DiNardo, archbishop of Galveston-Houston and president of the United States Conference of Catholic Bishops, was the celebrant. Attending from Arkansas were vocations director Msgr. Scott Friend, Father Martin Siebold of Rogers, Father Jeff Hebert of Conway and Mark and Catherine Johnson, parishioners of the Cathedral of St. Andrew in Little Rock.

Amaro is scheduled to be ordained a priest next year.

The path leading to his diaconate ordination was not a perfect one. Growing up in Guanajuato, Mexico, he is the oldest of six children to Martin and Graciela Amaro. His family moved to the United States when he was 10 and he drifted from his relationship with God.

“I lost my faith or at least it was weakened simply because we wouldn’t go to Mass often,” he said. “Moving to the U.S. was a major transition for me and my family, and so it took us a while to find a parish and feel comfortable there.”

During his junior year of high school in Lonoke (Lonoke County), his mother signed him up to attend a Search retreat.

“The Search retreat helped me understand the priesthood better; the seminarians answered a lot of questions that I had,” Amaro said of the youth retreat that seminarians also attended.

Amaro’s devotion to Mass at St. Edward Church in Little Rock became stronger, including his willingness to be an altar server and play the drums for children’s Masses.

In his senior year, he attended a diocesan Come and See retreat, which is for those discerning a call to the priesthood.

“The retreat helped me understand that I needed help to discern my vocation, and so I was encouraged to talk to my pastor about my discernment. I am very grateful to (then-pastor) Father Jason Tyler, who helped me at the beginning of my journey,” he said.

Amaro, 26, entered the seminary after high school in 2010 and later graduated with a degree in philosophy. While studying in Rome, Amaro said he’s learned a variety of lessons from the pope.

“I’ve learned so many things from our pope, but one of the most significant is his constant invitation for all the people, but especially the ordained ministers like myself to always go in search of the people of God instead of waiting for the people to come to us,” he said.

Amaro admitted as he continues to move toward his priestly ordination he doesn’t feel called to one particular ministry.

“I often pray to God to help me in my future ministry and that wherever I am sent, I do good and be a good pastor to the people of God,” he said.