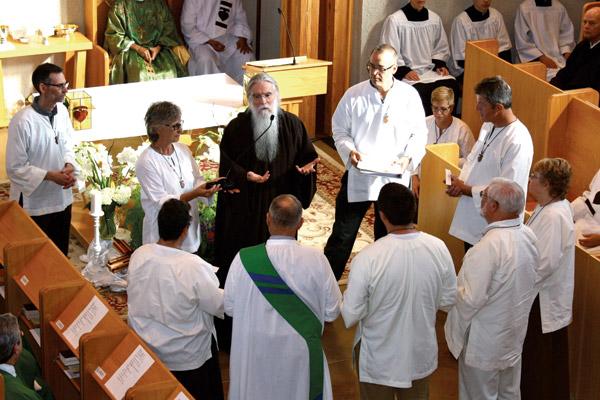 Alesia Schaefer
John Michael Talbot gives a blessing as six individuals make their permanent profession for the domestic expression of the Brothers and Sisters of Charity Oct. 6 at Little Portion Hermitage in Berryville.

Alesia Schaefer
John Michael Talbot gives a blessing as six individuals make their permanent profession for the domestic expression of the Brothers and Sisters of Charity Oct. 6 at Little Portion Hermitage in Berryville.

BERRYVILLE — Forty years ago, a remote but peaceful area in the Ozark Mountains was eyed for beginning a community of religious. It was here, in the hilly outskirts of Berryville, that founder John Michael Talbot realized his dream of finding tranquility in the quiet and contemplating God’s wisdom in the Franciscan and Benedictine traditions.

On Oct. 6, Bishop Anthony B. Taylor celebrated Mass at what is now known as the Little Portion Hermitage, honoring the 40 years of the community’s existence and its work.

With around 240 individuals and families arriving from around the country to commemorate the occasion, Talbot, the founder of the Brothers and Sisters of Charity, a public association of the faithful, and the community had spent months preparing for the event.

Six people — four men and two women — made a permanent profession for entering the domestic expression of the community during the Mass. This profession made them lifelong members of the Brothers and Sisters of Charity. Several other individuals from Texas, Illinois, Michigan and the New England area expressed an interest in the domestic expression of the community after being invited to attend and participate in the week of the general gathering.

“People are attracted by the beauty of the grounds, the contemplative vibe and the strong sense of family,” explained Brother John Marmion, who discerned his vocation in 2016 to become a part of the community.

“We learn how to pray and grow closer to the Lord, seeking the face of the Lord in one another, in our work of scrubbing toilets or caring for the grounds,” explained Brother John, who works as an executive assistant to Viola Talbot, wife of John Michael.

Unlike other religious communities, the Brothers and Sisters of Charity are founded on the spirit of monastic expression for all states of life. The community has celibate brothers and sisters, singles who can marry and families called to live as a monastic and domestic spiritual family. The community shares common work and recreation areas while retaining appropriate, separate cloistered areas for each expression.

“We are rebuilding the Church one parish at a time and renewing hearts, one life at a time,” Talbot said in describing the ministry.

Your guide to Christmas gifts from religious communities