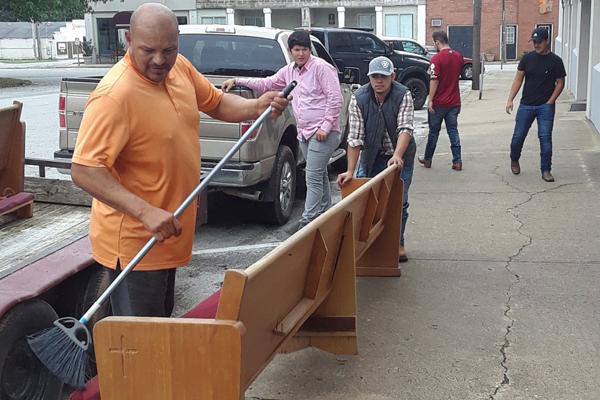 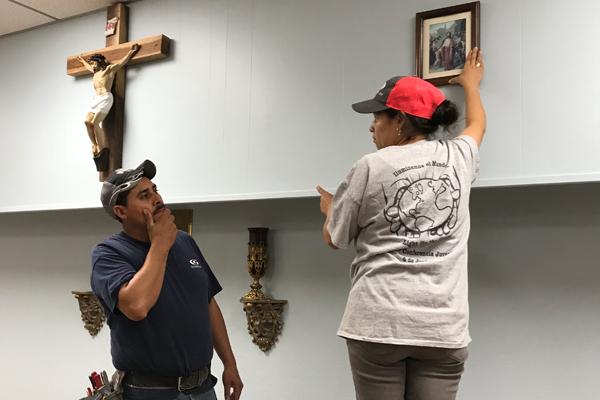 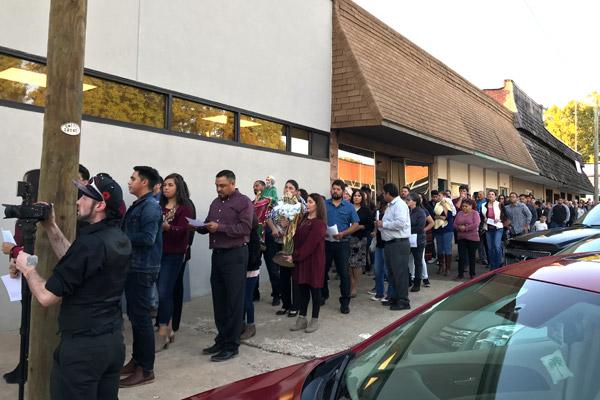 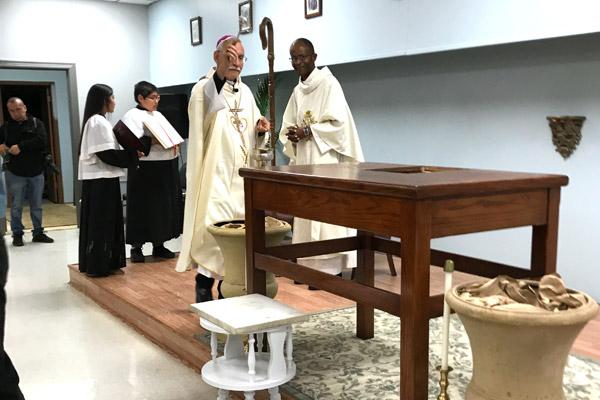 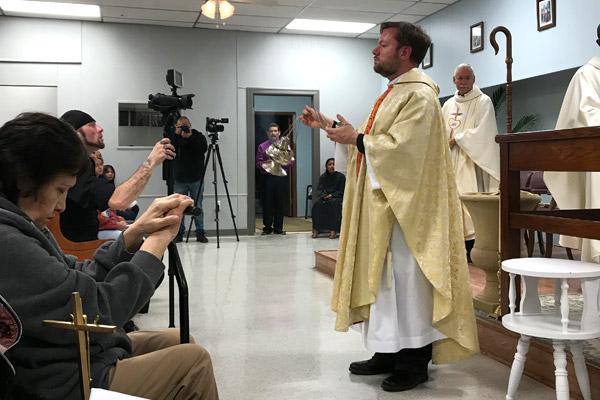 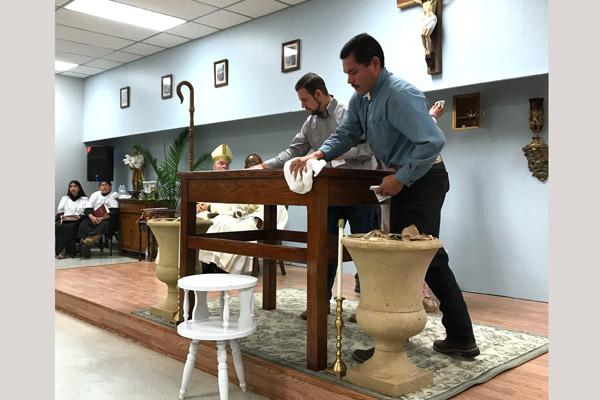 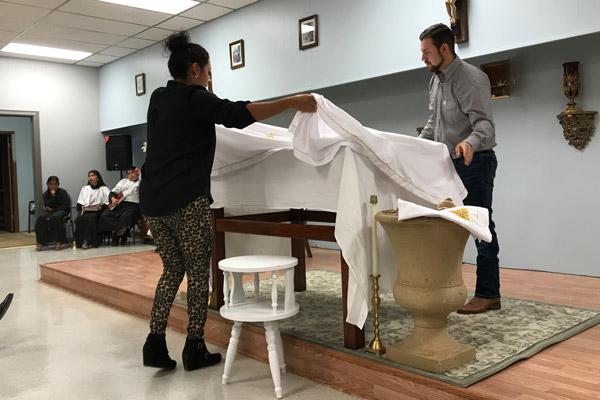 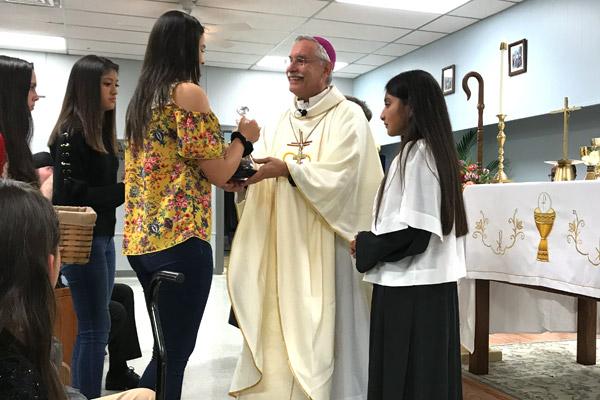 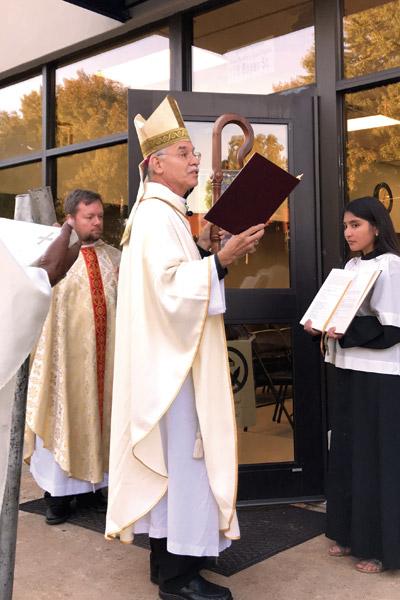 Photo courtesy Tania Herrera
Bishop Anthony B. Taylor begins blessings at the front door as he dedicates the new Sts. Peter and Paul Church in Lincoln Oct. 20. It was the first Mass celebrated in the parish’s new building.

Photo courtesy Tania Herrera
Bishop Anthony B. Taylor begins blessings at the front door as he dedicates the new Sts. Peter and Paul Church in Lincoln Oct. 20. It was the first Mass celebrated in the parish’s new building.

After attending a charismatic retreat in Fayetteville around 2010, Maria Elena Ortiz felt a call to start a local charismatic prayer group in Lincoln, the western edge of Washington County.

“I was feeling that God was asking me for something,” Ortiz said, and she began drawing — a church, a charismatic prayer group and a nun holding a Bible. Soon, she and others were making calls to drum up interest in meeting to share their faith.

The image signified the hope of the faithful Hispanic community that began meeting in homes, then renting a vacant storefront off of the town square about seven years ago to host Mass monthly, then eventually every Sunday.

On Saturday, Oct. 20, the drawing came to life. Bishop Anthony B. Taylor dedicated Sts. Peter and Paul Church, celebrating a bilingual Mass at 6 p.m. for the first time at their new building, 113 Boyer Avenue in Lincoln. It was raised to the status of a parish by the bishop June 29, 2017, the feast day of Sts. Peter and Paul.

Located in the West Ozark Deanery in the city of about 2,000, Sts. Peter and Paul Church now has a place to call its own. It is a mission of St. Joseph Church in Fayetteville under pastor Father Jason Tyler. Associate pastor Father Eliseo Noel Njopmo is often the celebrant.

“It’s an amazing story to see the way this has developed. It really in so many ways was from the ground up,” Father Tyler said.

In early 2017, future worship options were being discussed, as their rental building was becoming too small, with the faithful “packed in tightly,” Father Tyler said. When 10 a.m. Sunday Mass began, the numbers grew from about 50 to a little more than 100 consistently, Father Tyler said.

The Bell Health Mart Pharmacy, within walking distance of their previous rental space, went up for sale and thanks to diocesan contributions and an anonymous donor, the building was purchased for $55,000, in September 2017, said Jim Driedric, diocesan property services manager. Driedric coordinated the purchase of the property while the Diocesan Building Commission made design recommendations.

Bob Kelly, a St. Joseph parishioner and architect, donated his services to draw up plans so the 108-year old building space could be a functional church. R. Clinard Construction and Consulting in Rogers spent $49,709, coming in $250 below budget, to transform the inside into a sacred space, Driedric said.

“We did a small renovation to create a sacristy, an area for the choir, slightly raised the floor for the altar,” Kelly said, “It’s a wonderful little Catholic community out there; it was great to work for them.”

Ortiz said the church has an extra space that will be used as a cry room, classroom and for confessions. There’s also more space in the back to be used for two more rooms, she said.

Father Tyler said parishioners helped with the smaller parts of the renovation, including the cleanup, helping to save costs.

“This is a group that is very proud to have a church in their own community now,” he said.

Ahead of the dedication, parishioners were moving items from the rental property, painting and cleaning items like the altar, ambo and tables, Ortiz said.

Ortiz and her family have been active in the faith community since the grassroots effort began. Today, she leads the parish council, sings in the choir and she still meets with about 40 other adults, youth and children for a Wednesday prayer group.

It was important to establish a Catholic church in Lincoln because other options were too “far away.”

“Especially the roads are not very good during the winter time. It was important because our children were invited to other (Protestant) churches and since they were closer, they’d just go. So that was another sad thing. Even the moms and dads” began leaving, Ortiz said.

“To know our faith is important,” she added. “… We have a treasure and there’s a lot of Catholics that haven’t found it yet — that’s the Eucharist, Jesus. Once you find the treasure you don’t move.”

Tania Herrera, the Arkansas Hispanic Catholic Charismatic Youth coordinator, went to a retreat in Lincoln on her birthday four years ago and “had my first encounter with God.”

The 24-year-old lives in Farmington, about 15 minutes from the parish, and works as a paralegal, but finds time to lector, lead the parish’s youth group and serve on the parish council.

“It’s super exciting … to see how it’s evolved this year … We have this group chat where all the parishioners are on through Messenger. It’s been awesome seeing people that weren’t very involved” help with the transition, Herrera said.

The parish is currently a Spanish-speaking community, but Father Tyler hoped offering a bilingual dedication would also attract local English-speakers. He said he hopes to host a town hall meeting Wednesday, Nov. 14 to “assess how much interest” there would be in an English Mass.

“That’s our next goal to invite the English community to come and find the right time so they can join us on this journey because there’s more to do,” Ortiz said.