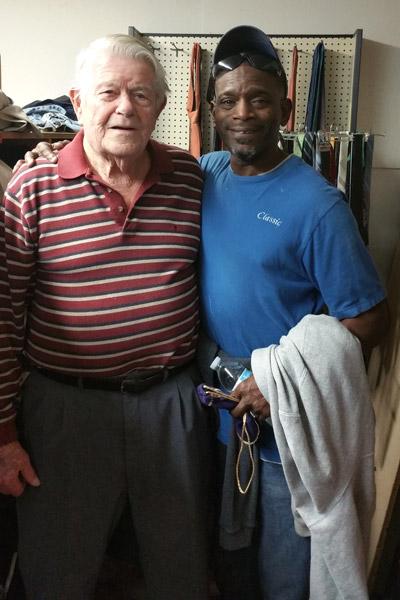 “We’d even given away three cars and a van that had been donated, lock, stock and barrel,” Clyde Chaney, manager of the Clothes Closet, said. “Buy your own gas.”

Chaney’s wife Betty, who died Sept. 28, 2016, after a long illness, started the agency in 1991 as a school uniform exchange for Fort Smith’s Catholic schools, but the ministry quickly expanded as she became aware of how many people in the area needed help acquiring clothing and household items.

In 1995, when the Clothes Closet outgrew its room in St. Anne’s Center, First National Bank gave the organization a building on 212 N. 3rd St. in downtown Fort Smith. Clyde Chaney helped his wife on evenings and weekends until he retired 18 years ago, and after that they operated as a full-time mom and pop ministry until Betty became too sick to continue.

Once Betty needed full-time home care, Clyde Chaney, now 88, needed to hire three part-time employees to help him with the store. That put pressure on the Golden Rule Clothes Closet’s budget, and donations were no longer enough to meet expenses. While Chaney still worked full-time driving to pick-up large donations and working in the store three days a week, he had no potential successor who was willing to work as long and hard as he did without compensation.

On Oct. 30, the Clothes Closet’s board of directors made the decision to shut down.

Although Fort Smith has recently developed new ministries to help the poor, including St. Anne’s Society, a joint effort of Immaculate Conception, Christ the King, St. Boniface and Sacred Heart of Mary/Sts. Sabina and Mary parishes, the Clothes Closet had filled a unique niche for 27 years. They were quick to respond in times of crisis, helping families who lost their possessions in fires or floods.

“When I fled from an abusive relationship, Clyde helped me set up my own household with pots and pans, sheets, blankets and furniture,” one woman said. “I came to say goodbye and thank him again for everything he did.”

The Chaneys’ help always came with a personal touch, and over the years downtown residents began to look at them as family. Charles Allbritton, who had visited the Clothes Closet many times, came in to get a dress shirt and tie.

Eventually, they settled on an ivory silk tie to complement a peach-colored dress shirt.

Three years ago, when a flood washed away the possessions of 150 people living by the river, Chaney found a few motel rooms and put several tents in the Clothes Closet yard. He provided sleeping bags and crates of household goods to help them get a fresh start.

“Last year 46,000 people walked through our door,” Chaney said. “We never ask for a lot of paperwork, just identification. According to the IRS, we gave away $800,000 worth of clothing, and that doesn’t count the household items and furniture we provide. Over a period of 26 years, we probably had more than a million visits to our store and probably gave away over $10 million worth of clothing and household goods.”

While they operated the Clothes Closet, Clyde and Betty Chaney received many honors. They were selected as Arkansas’ Knights of Columbus Family of the Year.

As he contemplated his future, Chaney thought little of past achievements and honors.

“Giving makes me happy,” he said, “I’ve got to keep going as long as I have something to give.”