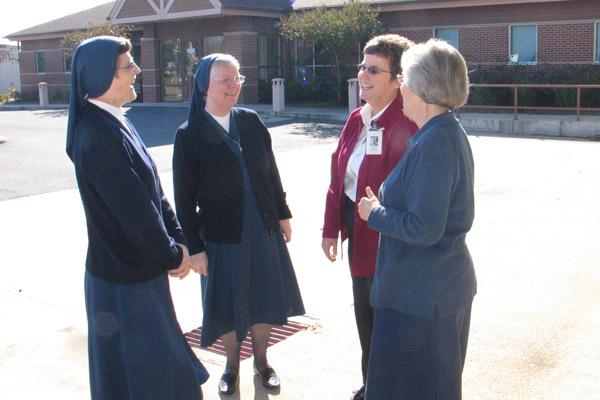 After 28 years of providing a variety of health services to the poor and vulnerable in Lincoln and Desha counties, the Daughters of Charity are moving to other states.

The final three sisters have moved or are moving this fall. Sister Cecillia Tsao is now serving as a doctor in Washington, D.C., and Sister Marilyn Perkins is working in parish ministries in Niagara Falls, N.Y.

Sister Marilyn Moore, the superior, who has served four years in Gould, told Arkansas Catholic Oct. 30 that she will move in a few weeks once their home is sold. She’ll then serve in Evansville, Ind., on an organic farm run by the Daughters of Charity. Their order asked the sisters to relocate.

Over the years at least 20 Daughters of Charity served southeast Arkansas.

“I will miss a lot of things,” Sister Marilyn Moore said. “I love the rural area here, but from a people standpoint, I’ll miss the diversity here. There’s all kinds of diversity, I don’t think I’ll find that quite so prominent where I’m going. We definitely have religious diversity, racial diversity, ethnic diversity and everyone seems to get along with all that and I really appreciate that.”

Health care has been the main ministry established by the sisters in Gould and Dumas, but Sister Marilyn has worked in prison ministry, serving as a tutor or aide in the GED public school program in the Varner Unit.

“It’s rewarding in its own way to see them encouraged and motivated to work toward their GED,” she said. “They all know that I’m leaving … Politely they said I would be missed. It’s like anything else, they’re used to people coming and going.”

St. Elizabeth Health Center in Gould was founded in 1990 by Sisters Mary Walz, a social worker now in Durant, Miss., serving in the Lexington Medical Clinic, and Sister Joan Pytlik, a former nurse practitioner who now lives in Little Rock. In 1989, the sisters were asked by the West Central Region of the Daughters of Charity National Health System to research the health and social service needs of communities in the Arkansas Delta, according to a 2010 Arkansas Catholic article. At the time, they discovered residents had little access to doctors and transportation.

In 1992, the DePaul Health Center opened in Dumas, about eight miles from Gould’s clinic. Since its founding, the sisters expanded health services to include diabetes and obesity care, dental care, mental health, social services, a fitness center and a pharmacy.

Though the sisters have not been in charge of the clinics for years, they were staff members or active on the board. Sister Joan, now the diocesan social justice advocate, said there will still be a sister, who lives in Washington, D.C., on the board who will visit occasionally. It is still run by the Catholic health system Ascension.

Sister Joan said she hopes the clinics will continue to thrive because although more clinics have been founded in southeast Arkansas the past 28 years, transportation is still hard for people in Gould. She said she will also miss going to Gould, as the sisters would “meet together for a weekend every month for these 28 years.”

Currently, Sister Joan and Sister Mary Ann Azar are the only two Daughters of Charity in the state, serving in Little Rock, but Sister Joan said three sisters recently have visited the Diocese of Little Rock concerning potential positions in parishes and Catholic organizations in Little Rock.

“I’m very proud,” Sister Joan said of the legacy left behind in Gould. “We started it, but we knew it wasn’t going to be an easy place to live and serve because it’s remote and poor, etc. I think with the sisters there, especially Mary Walz, they had a lot of influence bringing the black and white community together; it was very segregated when we first got there so I’m very proud of that and how the sisters were a part of the local community there. A lot of people got good health care too. I guess there’s a time for everything under heaven.”