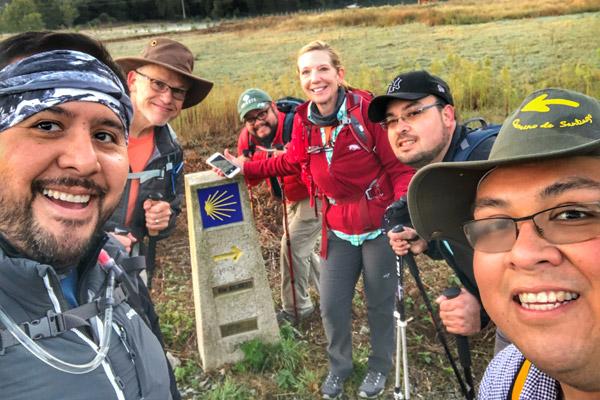 With a shell, walking stick, backpack and little else, 14 Arkansas pilgrims set out on the Camino de Santiago, “The Way of St. James,” trail in Spain in search of something for their lives.

Between 200,000 and 300,000 pilgrims annually walk, ride bicycles or horseback more than a hundred miles along a network of routes that are some of the oldest pilgrimages in Christianity, originating around the ninth century, ending at what is believed to be the remains of the apostle St. James.

Each person has a reason for their journey that can be as deep as longing to experience humanity’s connection to nature to taking it on as a physical challenge. But no matter what the reasoning, God is clearly present along The Way.

“You’re meeting people along the way from different nationalities, different languages, different experiences in life and why they were doing the Camino, that was always the question,” said Father Rubén Quinteros, pastor of Immaculate Heart of Mary Church in North Little Rock (Marche) and St. Mary Church in North Little Rock, who coordinated the pilgrimage. “Most talk about self-reflection, but I believe God is at work. They try to get away from daily life and connect with nature; I think that reveals a way to connect with God. God is in the Camino.”

Lay pilgrims from Central and Northwest Arkansas, and one relative from Miami, along with Fathers Quinteros, Juan Guido of Fort Smith and Juan Manjarrez of Little Rock and Deacon Tim Costello of North Little Rock, flew to Spain Oct. 15 and returned Oct. 29.

They walked the Camino Francés, or French Way, the most popular trail for 11 days, Oct. 17-Oct. 27, about 12 to 15 miles each day, celebrated Mass and spent the night at hotels or hostels, planned by Poe Travel in Little Rock. The seashell they carried is a common symbol for Camino pilgrims.

The trip was two years in the making.

“I was moved knowing God has a grace for me at Santiago. That was at the back of my mind all the time,” said Father Quinteros, who has a love for hiking. “I wanted to go and that was something I shared with people. People started asking about my trip.”

The group met about three to four times before the pilgrimage to hike and many trained on their own.

For Gabriela Bautista, 22, a college student and fulltime assistant to the English director of religious education at St. Raphael Church in Springdale, there was no training. She expressed interest in the trip two years ago, but about two months before, she decided to take the leap of faith.

“I’ve always liked nature and I thought maybe that was a way of finding myself,” away from the stresses of life and school, she said.

Bautista admitted she is “not the most athletic person” and she was not prepared — for example, it’s recommended to wear shoes a size larger because feet will swell from all the walking.

“It was a lot of small details I wasn’t aware of. I ended up buying new shoes over there” and suffering from intense blisters that eventually forced her to take a taxi for five miles at one point, even with her desire to keep going. Despite the pain, she hopes to return.

“Everything seemed more intense and beautiful. It was like I could feel him in everything, I don’t know how to explain it,” she said of God’s presence. “The times I was walking alone … I would just talk with him and for the first time in a long time I felt like he was responding to me. It was like he was walking with me, like I was never actually truly alone; like he was there.”

Father Quinteros said the ages ranged from 22 to 72 and everyone walked the majority of the trail. Pilgrims collect stamps along the route to prove they’ve completed their journey and receive a compostela, or certificate at the end. A Pilgrim’s Mass is held at the Cathedral of Santiago de Compostela in Galicia in northwestern Spain.

“The whole Camino experience I believe is a sacramental act,” he said.

He reflected on Luke 9:3, “when Jesus told the disciples take nothing for the journey … It made me feel sometimes a lot in life we take things we don’t need. Not only material things but spiritual things ... my big challenge was my backpack because it was heavy and it was hard to let it go, things I didn’t need. I got to the point halfway where God said, ‘You have to let it go you don’t need that, you need to trust me,’” and he unpacked his backpack, making the load lighter both physically and spiritually, he said.

Monica Weigle, 52, a parishioner at Immaculate Heart of Mary Church, went into this first ever pilgrimage physically prepared, as a tennis player, former runner and a side gig as a Beach Body coach, expecting to focus solely on her relationship with God.

He had other plans.

“Every day of the walk I dedicated to a different person. I prayed all day long for them, said a rosary for them, lit a candle for them,” including her four children, best friends and other friends and family. “It turned out to be not about me at all.”

Weigle said it was “like a tapestry of events,” connecting her to her loved ones and fellow pilgrims in a spiritual way.

While it is a tough journey, the spiritual encounters were worth the pain.

Father Quinteros said he met a young police officer from Spain, who had fallen away from faith, but was walking the Camino to honor his late father.

“He said. ‘I never met a priest before and I never imagined I’d meet a priest in the Camino,’” Father Quinteros said. Another woman from Ohio was walking the trail despite her Multiple Sclerosis. “I’m still praying for her; hopefully she made it.”

“Everyone is the same,” he added. “We are walking together and I think that opened my eyes to even see my ministry that way. People are just looking for that sign, that a priest is more approachable in that way. Camino provided that for me, actually just to be with them,” he said.

Bishop appoints deacon to be ordained priest to NLR

Parishioners certified in Ignatian tradition to help others

Seminarians answer: Why I should go see the pope