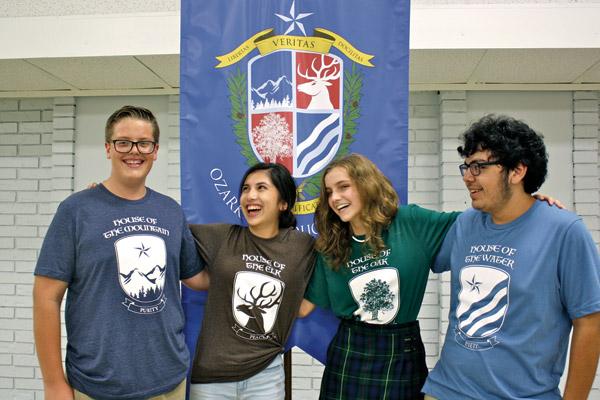 Alesia Schaefer
OCA students Nate Webster (from left), Tania Mares, Zoe Whiting and Edgar Perez reveal the four different T-shirts of their houses. These students will remain in the same house for the entirety of their high school career. In their house, students will compete in games, pray and meet together to form a “family” that includes faculty and staff.

Alesia Schaefer
OCA students Nate Webster (from left), Tania Mares, Zoe Whiting and Edgar Perez reveal the four different T-shirts of their houses. These students will remain in the same house for the entirety of their high school career. In their house, students will compete in games, pray and meet together to form a “family” that includes faculty and staff.

TONTITOWN — Head of school John Rocha stood in front of the students, faculty and staff holding small packages. Each was neatly wrapped in brown craft paper with a small feather attached. The packages' contents would reveal the name of the house each recipient would represent for the duration of their high school years.

While four banners emblazoned with the crest and name of each house swayed in the wind behind them, students waited for their name to be called and to receive a small parcel delivered with fanfare from Rocha. As each student tore the paper away, confetti fluttered in the wind and a colored T-shirt extolling the name and crest of a house was unfolded.

The house sorting day was held Oct. 2, the feast of the Guardian Angels, and was planned as an important kick-off for the inaugural year at OCA. Mixing the current student body of ninth and tenth-graders into houses with faculty and staff offers a way to bring a sense of identity and camaraderie into the school, according to Rocha. It also provides an established culture as new grades are added in the coming two years.

“Houses encourage leadership,” Rocha said, “and a sense of pride in the school, but they also provide a sense of belonging to tradition and family.”

The idea of sorting students into houses, or smaller groups, is not a novel one. It draws similarities from what takes place with the students at Hogwarts Academy in the J.K. Rowling, “Harry Potter” novels where the students were sorted into houses that reflect their strengths and personalities. In fact, both Catholic elementary schools in northwest Arkansas — St. Vincent de Paul School in Rogers and St. Joseph School in Fayetteville — also employ the use of house systems. Similarly, the houses mix grades and students together to compete in games as well as to mentor the younger grades. Each house also extols the virtue of a saint.

Researchers say this type of inclusion and engagement in school touts other benefits. In the Journal of Educational Research, author Jung-Sook Lee examined the relationship between student engagement and academic performance in 3,268 15-year-old students from 121 U.S. schools and found that behavioral engagement and emotional engagement significantly predicted reading performance.

At OCA, the four houses are the House of the Elk, the Mountain, the Water and the Oak.

“Each of these houses symbolize attributes of Christ as well as characteristics that students would want to emulate,” Rocha said.

But these symbols were also chosen to tell a story, Rocha said.

“Each of these symbols represent an important piece of the Ozark story, but they also represent the ideals to which an Ozark Catholic student aspires.”

In preparation for implementing the house system, Rocha, along with four students and a staff and faculty member did some homework. They attended The House System Institute Student Leadership Summit hosted by Archbishop Moeller High School in Cincinnati. The group spent three days learning how to incorporate the house system into the learning environment.

An important lesson ninth-grader Gianni Squillace remembers is that they were shown how to engage students who normally wouldn’t talk or participate in activities.

“We learned the importance of talking to everyone because of the impact it can have on someone,” Squillace said. “We were shown how to lead by giving of ourselves but also to give others the opportunity to lead.”

Olivia Burtis, a 10th-grader at OCA, said the skills she learned at the Institute helped her work more efficiently with her fellow students and housemates as school began this year.

“I think this helped me to be a part of building the foundation of a house system at OCA,” she said.

Since instituting the house system, Rocha said there has been the surprise of how competitive the games against each house has been, but also how students have stepped up to lead within their houses. Another important feature, siblings upon entering the school, is automatically initiated into the house of their older brother or sister at the school.

“This emphasizes family, too,” Rocha said with a smile.

Thus far, the houses have celebrated with games and a meal.

All for one: Ozark completes a memorable first season