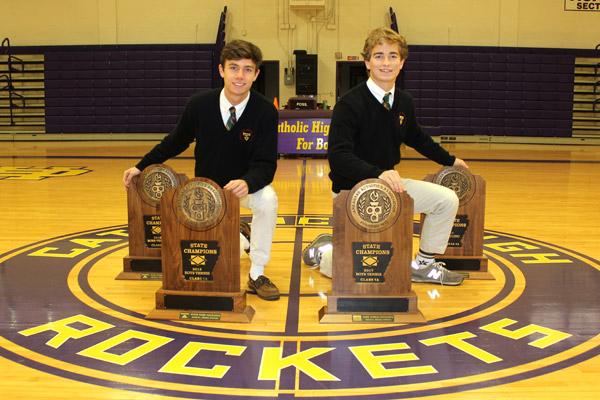 Catholic High Athletic Director Tim Ezzi has had better mornings. His quest to retrieve the school’s tennis state championship trophies out of their trophy case has run aground on a sticky lock. Try as he might, the sentinel clasp between he and his prizes stubbornly refused to yield.

After some exertion and a little torque, the latch finally gives and the window slides begrudgingly open. It’s as if the very fixtures here don’t want to yield anything that confirms the amazing four-year run of the Rocket tennis team, anchored by doubles partners Steven Weeks and Henry Nolan, has finally come to an end.

It’s a reality that even the seniors themselves have only recently come to grasp.

“I don’t know what to do with myself after school anymore,” said Nolan with a chuckle. “It’s weird, it’s so weird. I’ve had so much time. Really, it just hit me this week because I’ve been busy with college applications. But yes, it has sunk in and it’s weird. I don’t like it.”

“At least for me, I think this year was definitely more pressure.” Henry Nolan

Four years ago, the little-known freshmen duo pulled a stunning upset at the state tennis tournament that laid the first brick of a championship career that can only be tied, never bested: Four wins in four years. Picket fences. Back to back to back to back state doubles titles.

“We knew that everyone would be coming for us and we knew we just had to stay confident,” Weeks said. “We knew we could do it, obviously, but we also knew that we had to get up early in matches and not fall behind and let someone get the edge over us. Don’t get over-confident, just play within our means.”

The final tally for the duo includes two conference doubles titles, as freshmen and seniors, and three overall doubles titles — a bracket comprised of top state place winners across all classes — as sophomores, juniors and seniors.

Along the way, they also contributed to four straight conference and state team titles and just for good measure, they went undefeated their senior year for the first time in their high school careers.

“Our freshman year, that (state title) was a really big one,” Weeks said. “At the state tournament we actually lost the first set in our first two matches. We were pretty close to losing and we just fought through it.”

The players confessed to feeling the weight of the bullseye on their backs, particularly so in their final year. But the combined experience they’d racked up, as well as the unshakable chemistry they shared as a team, helped them shelve the stress and focus on the competition.

“At least for me, I think this year was definitely more pressure,” Nolan said. “Just because a lot of people felt that it was expected that we should win since we had done it the past three years. That really wasn’t the truth. I kept on telling people, ‘This is our hardest year.’”

Even so, the team was seldom challenged throughout most of the regular season and into postseason play. The team got a scare at the overall championship when Little Rock Central rivals Zandy Djurica and Phillip Abston (a Catholic High transfer) punched them in the mouth 2-6 in the first set of the semis. And disaster nearly struck in the state semi-finals against Cooper Gommel and Payne Henry of Rogers.

“(Rogers) actually had set point on us the first set,” Weeks said. “They were up 5-4 but we came back and won that set 7-5 and then we won the next set. That was pretty much our last close call.”

When the final ball hit the ground, the twosome dropped their rackets and embraced, a year’s weight lifted off their shoulders, loosing pent-up joy four years in the making.

“It was everything; it was elation, relief, sadness. I was just overwhelmed,” Nolan said. “All my family was in the crowd and all of my friends’ families. Our best friends were there, they were allowed to leave school to watch. I was just happy to get off the court and hug everyone who’d watched us for the past four years. Obviously, it was sad that it was over. It was a mixture of everything.”

Neither athlete has a taste for competition at the next level, at least not of the intercollegiate variety. Both say they will play for fun and leave it at that as they move into the next chapters of their lives. And both are as grateful to the game as they are aware of their permanent place in it, both for their high school and their state.

“One of the big things I’m taking away from this is, we did win four state championships in a row and that’s obviously important and cool, but it’s not the most important thing,” Weeks said. “It’s about how other people see you and how you act and how you show others what you represent.”

“It’s definitely taught me that hard work pays off,” Nolan said. “We put our heads down, we grinded, we worked so hard. Not even for the past four years, but for the past 10 years. It was hard doing all of that and keeping with it. But it feels good when it pays off.”