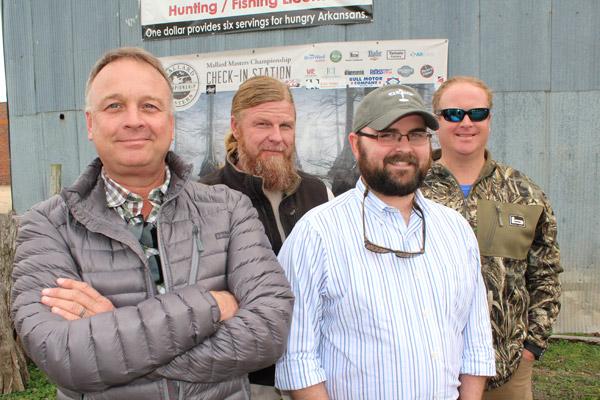 Mallard Masters is slated for Saturday Dec. 8 in downtown Augusta. For tickets or to register a hunting team, visit mallardmasterschampionship.com. Given high demand, pre-registration for all events is strongly encouraged.

Boyd Wright’s not the best duck hunter in the world and he’s the first one to admit it. But he gets as excited as anyone about the mallards making the annual return visit to their Arkansas wintering grounds.

Duck hunting, as most everybody knows, is a major draw to the Natural State, situated as it is under a major flyway and offering plenty of food and habitat in harvested rice fields and water along the route. Stuttgart gets most of the attention for ducks, even though regions to the north make for just as bountiful hunting.

“We’re in a very similar flyway to Stuttgart,” said Wright, who attends St. James Church in Searcy. “Within a 10-mile radius of the boat ramp at Augusta, there’s access to over 100,000 acres of public land to hunt. And that public land, it’s not just any land. It includes some of the very best duck hunting in the world, the Cache River Wildlife Management Refuge. That federal land is holding, year in and year out, the largest concentration of mallards in North America, by U.S. Fish and Wildlife calculations.”

The influx of ducks stands in stark contrast to the out-migration of people from Woodruff County where Wright calls home. Numbering 22,000 at his zenith, the county now holds less than 6,500 residents and while Wright insists his longtime hometown of Augusta has 2,000 residents, it’s hard to tell by looking. With the exodus went revenue, services and the very soul of the county.

“Myself, my brother, some friends, just a group of people that love Augusta and love Woodruff County were sitting around a campfire during duck season,” Wright said. “We were just thinking about the decline of population and what could we do that would draw some awareness to what we have here.”

The idea that came out of that conversation was a charity duck hunting tournament with proceeds funding scholarships for students in Augusta School District through the Chamber of Commerce. The event was dubbed Mallard Masters as a play on The Masters golf tournament in Augusta, Ga., right down to the green jackets the winners don.

From there quickly sprang the idea of Tailfeathers and Tamales awards banquet celebrated after the hunt. Offering food, libations, live music and dancing, it’s held right on the banks of the White River that flows a few yards from downtown.

Wright and his companions formed the first organizing committee and serve on it to this day.

“We thought, ‘Let’s copy off Stuttgart (Wings Over the Prairie Festival) but let’s not do what Stuttgart did. Let’s have our own event and have our own identity,” Wright said. “We wanted to put on something classy, something white tablecloth. Something that you can bring your grandchild to that’s getting into the sport and where you’re comfortable whether you’re 18 or you’re 80.”

Everything looked great on paper, but no one knew what to expect from the first Mallard Masters two years ago. They set their sights on a couple hundred people and four times that many showed up.

“We doubled the price of our tickets and increased the cost of the hunt and our second year we had close to that same number,” Wright said. “We gave up on trying to crowd control. We’re just managing the crowd now.”

The response has enabled the chamber to meet its funding demands for the scholarship program. For Wright in particular, who played his last down of high school football for Augusta High School and met his wife there, the success of the event is particularly gratifying.

“Our goal is to raise enough money, and so far we’ve been lucky, to match dollar for dollar scholarships through the Arkansas Lottery awarded to Augusta High School graduates,” he said. “We want them to come back and make their careers here. We also want to draw attention to everything good that’s in the county.”

Mallard Masters is slated for Saturday Dec. 8 in downtown Augusta. For tickets or to register a hunting team, visit mallardmasterschampionship.com. Given high demand, pre-registration for all events is strongly encouraged.