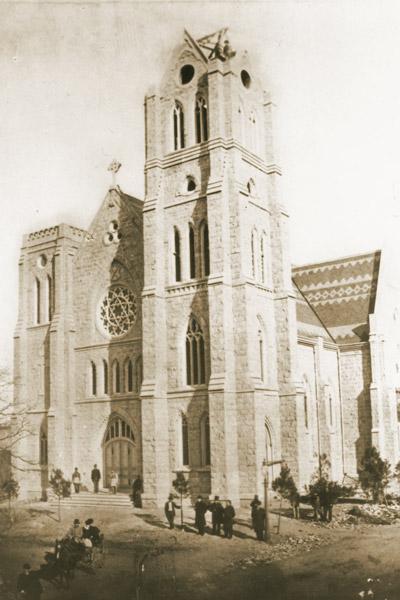 The second Cathedral of St. Andrew, mother church of the Diocese of Little Rock, is shown under construction across the street from the original cathedral. The “new” cathedral took three years to build and was consecrated in 1881.

The second Cathedral of St. Andrew, mother church of the Diocese of Little Rock, is shown under construction across the street from the original cathedral. The “new” cathedral took three years to build and was consecrated in 1881.

Irish roots were firmly planted in Arkansas when the Diocese of Little Rock was established in 1843. The first bishop, Sisters of Mercy and hundreds of parishioners hailed from Ireland and established many of the first parishes, schools and hospitals in the state. A region initially described as a “suburb of hell” was slowly transformed into a missionary field that now has more than 156,000 lay Catholics, 134 priests, 102 permanent deacons and 170 religious serving 128 parishes.

The early growth of the diocese was possible because of the work of visionary bishops, the Benedictines and Sisters of Mercy and courageous lay Catholics. In recent years growth in the diocese is attributed in part to immigrants — this time from Mexico and Central America — who are building a new life in Arkansas.

Here are a few highlights of the past 175 years in Arkansas and the world.

1843: Diocese established Nov. 28 by Pope Gregory XVI, along with dioceses in Pittsburgh, Milwaukee and Chicago.

1845: Diocese is estimated to have 700 parishioners and three priests.

1846: The first Cathedral of St. Andrew was consecrated Nov 1. During that year Bishop Byrne sought to have diocese dissolved and placed again under St. Louis.

1861: As the Civil War began, some schools closed or were used to house soldiers.

1862: Bishop Byrne died June 10 in Helena. Diocese had no bishop for five years.

1867: Edward M. Fitzgerald was consecrated as the Diocese of Little Rock’s new bishop Feb. 3 in Columbus, Ohio. He was only 33 years old.

1870: Bishop Fitzgerald attended the First Vatican Council and famously is the only American bishop to vote against papal infallibility.

1907: Bishop Morris took office as bishop after Bishop Fitzgerald died of a stroke.

1913: Local priests pushed back against anti-Catholicism, including Father Boniface Spanke, OSB, who started the “Chapel Wagon” traveling to celebrate Mass and teach the Catholic faith in rural areas.

1915: Arkansas legislature passed Convent Inspection Act, allowing law enforcement to inspect Catholic institutions with or without notice. Anti-Catholic sentiment was strong in the state from 1910 to 1930.

1922: Six priests and three deacons ordained at Subiaco Abbey, the largest class from the Benedictines.

1926: About 200 Catholics joined Bishop Morris and several priests for the World Eucharistic Congress in Chicago, attended by 1 million people. The Diocese of Little Rock was believed to be the largest group from the South.

1927: Diocese had 25,000 to 26,000 Catholics, out of 2 million Arkansas citizens. Diocese of Little Rock had “a seminary, two colleges, several boys’ high schools, academies for girls, 45 parish schools, an orphanage, refuges and a home of the aged.”

1927: Subiaco Abbey and College burned down in December, an estimated $1 million loss.

1930: St. John Seminary moved to Little Rock College buildings in Pulaski Heights. The college would operate alongside the seminary.

1937: The local “Cathedral Hour” and national “The Catholic Hour” were broadcast on KARK radio.

1950: Bishop Fletcher and 17 Arkansans made a seven-week pilgrimage to Rome for Holy Year and witnessed canonization of Blessed Maria Goretti.

1965: First concelebrated Mass, besides ordinations or episcopal celebrations, held with abbot and 12 monks at Subiaco Abbey March 26, an innovation of Vatican II.

1969: Father Lawrence P. Graves ordained an auxiliary bishop for the Diocese of Little Rock. (He later became bishop of Alexandria, La., in 1973 and died in 1982.)

1975: Bishop McDonald asked faithful to open hearts to Vietnamese refugees coming to Fort Chaffee in western Arkansas. At least half of the 24,000 refugees were Catholic. Parishes sponsored refugees and Catholics donated rosaries, medals and crucifixes.

1986: At the newspaper’s 75th anniversary, The Guardian was renamed Arkansas Catholic.

2000: Jubilee Year began in the diocese and world.

2007: Six of eight sisters in the Monastery of Our Lady of Charity and Refuge in Hot Springs were excommunicated for refusing to drop ties with a heretical organization.

2012: Diocesan House of Formation for seminarians dedicated on the campus of Our Lady of Good Counsel Church in Little Rock Sept. 20.

2012: Year of Faith kicked off in Universal Church.