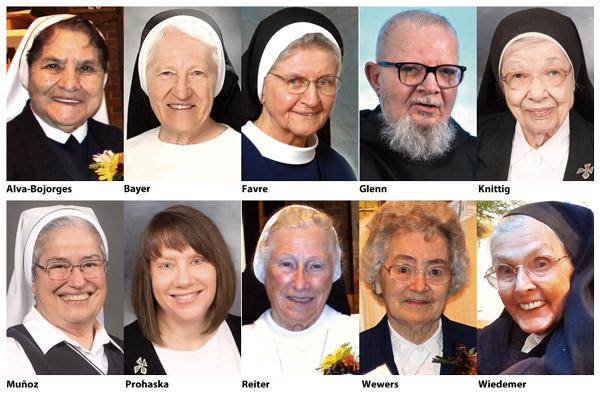 In 2018, two congregations with central houses located in Arkansas received financial support from the Retirement Fund for Religious: Subiaco Abbey and Carmelite Monastery in Little Rock.

Religious communities apply annually for financial support from the national collection, and distributions are sent to each eligible community’s central house.

Ten religious were honored this year for celebrating significant anniversaries. They have served their community as teachers and cooks, some for more than 75 years.

Sister Laurene Favre, who turned 102 in April, celebrated her anniversary as a Sister of Mercy in September. Sister Laurene entered the Sisters of Mercy in 1933 in Webster Groves, Mo., and taught in Catholic schools in Little Rock, North Little Rock, Fort Smith, Tontitown, El Dorado and Hot Springs. Her former students visit and call often. Sister Laurene moved to Barling when the Catherine McAuley Convent opened in May 1992.

Sister Agatha Knittig was born in Morrison Bluff on March 31, 1922. She entered St. Scholastica Monastery in Fort Smith on Nov. 10, 1940, and was received as a novice June 24, 1941. She made her perpetual profession on June 24, 1946. For 45 years she taught elementary classes in Arkansas and Missouri. After 45 years of teaching, she became religious education coordinator at St. Theresa Church in Little Rock for five years. When she returned to Fort Smith she was assigned to the diet kitchen in the monastery to prepare trays for the infirmary sisters.

Sister Adrian Wewers, a native of Morrison Bluff, was born the oldest of 10 children. She entered St. Scholastica Monastery on Feb. 5, 1945, and made her first profession June 24, 1948. She made her perpetual profession on June 24, 1952. After earning her bachelor’s degree from Xavier University (now called University of St. Mary) in Leavenworth, Kan., she taught elementary grades in Dardanelle, Barling, Russellville and Paris as well as Pilot Grove, Mo., and Nazareth, Texas. She also was assistant house coordinator and worked in the early childhood learning center at St. Joseph Orphanage in North Little Rock.

Sister Ann Wiedemer was born March 26, 1927, in Newry, Pa. In August 1946 at the age of 19 she entered the Carmelite Monastery in Loretto, Pa., as a lay sister. Bishop Albert Fletcher invited the Carmel of Loretto to make a foundation in Little Rock. In 1950 Sister Ann and five other sisters arrived in Little Rock. She served as the cook for the community for 56 years. In 1990 she was asked to help out the Carmel in New Orleans where she and two other sisters remained for 10 years until the Carmel was flourishing again. When she returned she began working full time in correspondence. Through her letter writing she has ministered to countless souls.

Sister Lillian Marie Reiter, a native of Muenster, Texas, was taught by the Olivetan Benedictine sisters in her school. She was inspired to enter religious life in 1955, made first vows in 1958 and final vows in 1963. During her 60 years, Sister Lillian Marie served as a teacher and principal until her election as prioress of Holy Angels in 2011. Since her term in office ended in 2017, she enjoys helping out around the convent, particularly outdoors.

Sister Jeanette Bayer, a native of Muenster, Texas, began thinking about being a sister around the third grade. She came to Holy Angels Convent in 1955, made first vows in 1958 and final vows in 1962. Sister Jeanette has spent most of her years in religious life in education. She has taught elementary students in Little Rock, Pocahontas, Stuttgart and Paragould as well as Lake Arthur, La. She currently teaches at Sacred Heart School in Muenster, Texas.

Sister Norma Edith Muñoz was raised in Texas by Mexican parents. Her father arrived in the U.S. during World War II to work in the cotton fields and do construction around the country. She first met the Missionary Catechists of the Poor when they had a month-long mission in her home parish in Abiliene, Texas. She took her first vows in 1968 in Mexico and made her final vows on Aug. 25, 1970. Since then she has served in pastoral care in Mexico and Texas. She arrived in Hot Springs to 2011 and then served four years at Our Lady of Guadalupe Church in Glenwood. In 2016 she was appointed the director of Hispanic ministry for the Diocese of Little Rock. In her position she has overseen the V Encuentro process, participating in diocesan, regional and national events to foster better Hispanic ministry in parishes.

Sister María Elena Alva Bojorges is the oldest in a family of five, growing up in Texcoco, Mexico. She worked as a secretary and bookkeeper at the University of Chapingo. In 1965 she entered the Missionary Catechists of the Poor and completed her studies in Mexico and Ecudor. She has served in Mexico as well as in dioceses in Texas and Kansas. She currently works in Hispanic ministry at Our Lady of Good Counsel Church in Little Rock. She marked her 50th anniversary as a Missionary Catechist of the Poor in April with Sister Norma Edith Muñoz.

Arthur Glenn was born on July 8, 1942, in Chicago. He attended Roosevelt University and received a bachelor’s degree in liberal arts in 1970. He was hired by the Illinois Department of Mental Health Services and spent 21 years as a mental health specialist.

He entered Subiaco Abbey, making his first profession of vows on Feb. 10, 1993, receiving the name Maurus. Brother Maurus was then assigned to assist in the abbey business office. He also worked at Santa Familia Priory in Belize. He made final profession for Subiaco Abbey in 1996 while he working at Santa Familia. He was named guestmaster in 1996 and formation director in October 1997. When Santa Familia Monastery closed, Brother Maurus returned to Subiaco in 2002 to teach freshman religion. From 2005 to 2013 he was the abbey’s refectorian. Brother Maurus currently resides in the Abbey Health Center.

Sister Kimberly Rose Prohaska was born Aug. 13, 1963, in Chicago Heights, Ill. Her family moved to Mountain Home in 1979. Through the invitation of the diocesan vocation director Msgr. David Lesieur, she entered St. Scholastica Monastery in Fort Smith on Sept. 14, 1990. She has a degree in pastoral ministry from Dominican University in River Forest, Ill. Her ministries include parish ministry, prison ministry, Hispanic ministry, youth ministry and parish religious education in Helena, Forrest City and Mariana. She worked as the director of campus ministry at UA Fort Smith for two years.

She has served her monastic community as director of vocations since 2002. She was appointed subprioress in 2011.

In 2018, two congregations with central houses located in Arkansas received financial support from the Retirement Fund for Religious: Subiaco Abbey and Carmelite Monastery in Little Rock.

Religious communities apply annually for financial support from the national collection, and distributions are sent to each eligible community’s central house.

Set aside your doubts and open heart to the Lord