Our Lady of Guadalupe expert spreads message of unity

For 15 years Juanita Lamb shares symbolism of the apparition of Mary to St. Juan Diego 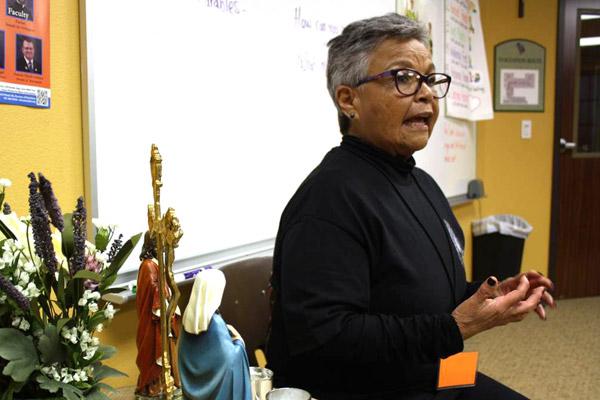 Alesia Schaefer
Juanita Lamb, parishioner of St. Raphael Parish in Springdale, speaks to students at Ozark Catholic Academy Dec. 5 about the imagery and symbolism represented in the image of Our Lady of Guadalupe to St. Juan Diego.

Alesia Schaefer
Juanita Lamb, parishioner of St. Raphael Parish in Springdale, speaks to students at Ozark Catholic Academy Dec. 5 about the imagery and symbolism represented in the image of Our Lady of Guadalupe to St. Juan Diego.

TONTITOWN — This is always a busy time of year for Juanita Salazar Lamb.

Yes, because it is the Christmas season. But also because December is the month of two of her favorite feast days. For over a decade now, the parishioner of St. Raphael Church in Springdale has been speaking to groups about the significance of St. Juan Diego and Our Lady of Guadalupe.

This was not a topic Lamb had imagined she would pursue. Yet, one could say the subject matter found her. Since taking on the study of Our Lady of Guadalupe for her graduate degree, Lamb admits it became not just a subject she studied, but one she felt compelled to share.

Years ago, while working as an account auditor, Lamb decided to go back to school and continue her studies at the University of Oklahoma to pursue a master’s degree in liberal studies. One of her professors suggested the study of the symbolism and the images in the story of Juan Diego and Our Lady of Guadalupe.

“I really liked this professor and wanted him as my advisor and this was a topic he suggested. I knew he was a devotee of Guadalupe and Juan Diego,” Lamb said, “but I also knew my objective would be to disprove this legend.”

So, in 2003, Lamb graduated with her degree with a thesis topic of “La Virgen de Guadalupe in Chicano Popular Culture: Images in Art and Literature.”

But she did not stop there. She went on to get a diploma from the Instituto Superior de Estudios Guadalupanos Basilica de Nuestra Senora de Guadalupe for the advancement of Guadalupan studies in Mexico City headed by Msgr. Eduardo Chavez, the lead investigator for the canonization of Juan Diego. This became Lamb’s biggest resource with more than 30,000 documents concerning the canonization of St. Juan Diego in 2002. She is now working toward a certificate through the Pontifical University of Mexico City.

As early as October, Lamb’s speaking requests range from small prayer groups, to students to church groups to give her presentation on the day by day journey of Juan Diego and the message of the image. In November and December one could find Lamb speaking at St. Raphael Church in Springdale, St. Mary Church in Siloam Springs, St. Vincent de Paul Church in Rogers and St. Joseph Church in Fayetteville as well as Ozark Catholic Academy in Tontitown.

“Juan Diego saw all of these symbols and images that were important in the Aztec culture in Our Lady’s appearance,” Lamb said. “I think we see her image on so many items and in art because she is Our Mother and this makes us more comfortable identifying with and approaching her.”

Growing up Catholic, Lamb said she always felt closest to the Lord as a child attending Mass with her mother who had such a devotion to the Blessed Mother. But there were years when Lamb lost that connection and closeness. It wasn’t until later, when her mother died, that she felt called back to the Church. In 2000, both she and her husband Bill entered the Church.

“When she appeared in Mexico, there was so much discord and division between the Spaniards and the indigenous peoples. She presented herself at a time to lead people back to her son,” Lamb added.

“I want to be a resource on Our Lady of Guadalupe because there is so much misinformation out there about her,” she said. “It has been placed on my heart to continue my studies and to be a resource to anyone who wants to know more.”

More than 500 in Hot Springs honor Our Lady of Guadalupe