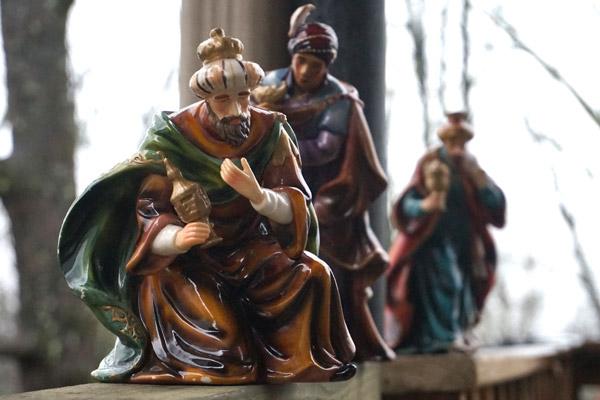 Aprille Hanson
Wise men travel across the deck railing on Kathy Wilkinson’s back porch in North Little Rock Dec. 13. The Our Lady of Good Counsel in Little Rock pa-rishioner moves her magi statues on the Sundays of Advent, sharing their progress toward the Nativity scene on Facebook.

Aprille Hanson
Wise men travel across the deck railing on Kathy Wilkinson’s back porch in North Little Rock Dec. 13. The Our Lady of Good Counsel in Little Rock pa-rishioner moves her magi statues on the Sundays of Advent, sharing their progress toward the Nativity scene on Facebook.

On Jan. 5 and 6, Our Lady of Good Counsel Church in Little Rock will host its first live Epiphany walk-through display, complete with actors, music and hopefully sheep. Click here to learn more.

Epiphany, or Three Kings’ Day, on Jan. 6 commemorates the journey of the Magi to the baby Jesus, the acknowledgment that the divine, both body and spirit, had come into the world.

Once Christmas ends, Epiphany can easily be lost in preparation for the New Year. New Year’s resolutions are already well underway six days in, making the celebration of the story of the wise men almost backtracking.

But is it exactly the story that’s needed after holiday commercialization fatigue — the story of following our Lord, no matter the tough terrain and unknowns.

“Ultimately in our lives of faith we are trying to follow where God would lead without knowing what the journey will entail and Epiphany captures that in a unique way,” said Father Erik Pohlmeier, diocesan faith formation director.

Epiphany is one of the oldest feast days in Christianity, according to Britannica.com. It represents Jesus’ presence to the Gentiles, which are represented by three wise men that legend has named Caspar, Melchior and Balthazar. However, the number of wise men, or kings, and their names are never stated in the Bible.

Western churches, including Roman Catholics, Anglicans, Lutherans and others observe Epiphany on Jan. 6, while Eastern Orthodox churches, which celebrate Christmas Eve Jan. 6, recognize “Theophany” or Epiphany on Jan. 19. Epiphany began in the Eastern Church, but by the fourth century in Rome, it was celebrated in January.

The time between Christmas and Epiphany is known as “Twelve Days of Christmas.”

“The wise men coming is part of the larger recognition of who this child is,” Father Pohlmeier said. “So he reveals himself starting with the poorest people, the shepherds and expanding to include more and more people with Epiphany. So with them we realize it was people from other lands and it starts to be a revelation that he is meant for everyone.”

In the Catholic Church, Advent begins the fourth Sunday before Christmas, the time of preparation for the birth of Jesus. The liturgical start to the Christmas season then begins on Christmas Day, which includes Epiphany and ends with feast of the Baptism of the Lord, the Sunday following Epiphany.

“It’s all part of the one big story. When we talk about Christmas, we’re talking about an event of greatest significance in human history so it deserves more than a day of celebration. So we try to prepare for it and linger in that celebration,” Father Pohlmeier said.

Catholics often celebrate by asking God’s blessing on their home through traditional prayer and writing “20+C+M+B+18” in chalk on their doorway, signifying the year and the traditional first initials of the wise men. Other common traditions include keeping decorations up until the day after Epiphany, parties to commemorate the day and the traveling wise men.

For about two to three years around 2010, Larry and Madelyn Womack, parents of Father Luke Womack, held Epiphany potlucks for fellow parishioners at St. Mary Church in Hot Springs.

“Every church has a Christmas party, but really you’re supposed to be preparing yourself” during Advent, Womack said. “… It’s important to remind people; I think that’s lost in the liturgical calendar.”

Kathy Wilkinson, a member of Our Lady of Good Counsel Church, said her wise men have been on the move since the
beginning of Advent. A tradition for the past four or five years, the wise men figurines in her house travel closer to her Nativity scene each week.

“I just move them all over the house and for sure try to post a picture (on Facebook) on the Sundays of Advent,” she said. “They’ve done some hard landscapes. Almost silly, like last year they were on the foot board of the truck making their way to the house, then climbing up each other to get up the steps; I had them rappelling off the fireplace.”

Moving the wise men has been a tangible way to show the spiritual movement of the season.

Jody Marra and her son Andrew, 12, parishioners at Our Lady of the Holy Souls Church in Little Rock, also follow the tradition of the traveling wise men.

“Last year, just to make other people aware as well, I had them going across the lawn and going outside,” she said, adding it’s about “reminding people, at least on Facebook, that Christmas is not over.”

Many countries, like Mexico, give Epiphany great prominence in their Christmas season celebrations. Sister Norma Edith Muñoz, MCP, diocesan director of Hispanic ministry, said in Mexico, children wait anxiously for the Three Kings to bring their presents on Jan. 6, similar to the tradition of Santa Claus in American culture.

“In the central and southern part of Mexico, the Epiphany is more important for us because children receive gifts during the Epiphany. The kings brought gifts to Jesus, so it is the kings that bring gifts to us,” Sister Norma said.

In Mexico City, the main square becomes a marketplace around Dec. 16, selling a variety of gifts, from bicycles to electronics, Sister Norma said.

A traditional Rosca de Reyes pastry cake, or Ring of the Kings, includes a miniature baby or babies baked inside representing Jesus. The cake itself signifies the wise men searching for Jesus.

“Whoever gets the image of Jesus, they’re going to have to do the celebration on the second of February,” Día de la Candelaria or Candlemas, the Presentation of Jesus in the Temple. It can mean throwing a party for the family, the neighborhood or another group, Sister Norma said. If there are multiple babies, a group of people help cook food for the party. “So the festivities continue — Christmas, New Year, the Epiphany and the Presentation of the Lord.”

Decorations — which can include a Christmas tree, but more prominence is given to the manger scene — are left up sometimes until Feb. 2, “when they take baby Jesus to present him at the temple. You see all kinds of baby Jesus’, all sizes, dressed up in different ways, but it’s a big celebration.”

For many, coming to the United States was a cultural shock, with the emphasis more on Santa Claus than the Three Kings.

Verónica Méndez León, 37, a parishioner at St. Edward Church in Little Rock, came to the U.S. in 2015 from her hometown of Aguascalientes in central Mexico.

Growing up, her family exchanged most gifts on Christmas, but the emphasis was always on Jesus’ birthday, with small gifts given on Epiphany.

“On Christmas, we put out the shoes for the baby Jesus. We sometimes put (gifts) in the shoes or under the tree,” Méndez said. “In January we’d (write) the letter to the Three Kings … Normally they bring to you a toy” or candy that’s put under the tree or in shoes by the door.

Méndez and her husband, Geoff, will pass along the traditions of Three Kings to their 1-year-old son, Ridley Mateo. Instead of Santa Claus, the birth of Jesus will also be the focus in their home.

“We give the presents to him, but we are blessed that Jesus gives us everything we have,” she said. “… As a family, we celebrate the birthday of Jesus and it’s the same way for the Three Kings. I will continue with the tradition.”

On Jan. 5 and 6, Our Lady of Good Counsel Church in Little Rock will host its first live Epiphany walk-through display, complete with actors, music and hopefully sheep. Click here to learn more.