Kids can’t guess where Father Stephen will turn up next 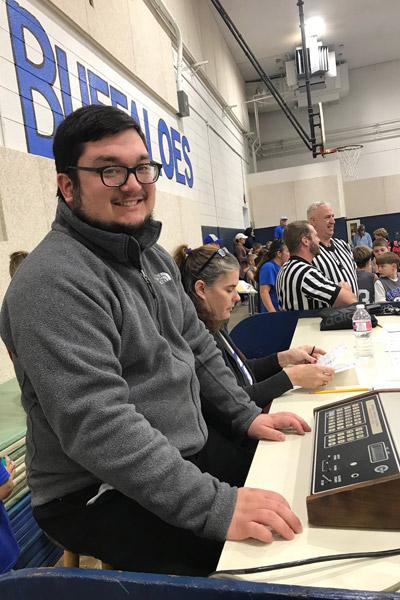 “We never know where he’s going to turn up next,” secretary Isidra Kaelin laughed.

Anabel Garcia, afterschool and lunch program director, began to take photos and videos of his visits to the school, posting them on Facebook using the hashtag #WheresFatherStephen. As others shared the posts and school communications director Carly Flanagan added some to Instagram and Facebook, the excitement grew.

“Last week my students heard Christmas music as they walked into the cafeteria,” Flanagan said. “Father Stephen was playing ‘Silent Night’ on the keyboard.”

The multi-talented 27-year-old priest, who remembers his own school days at Christ the King and Catholic High schools in Little Rock well, visits Immaculate Conception School once or twice a week, filling in wherever he’s needed.

“One morning I saw the school crossing guards with their orange vests and asked if I could help,” he said. “They gave me an orange vest and pretty soon Anabel (Garcia), a high school friend, was asking me to help serve lunch in the cafeteria and work with students in the afterschool program. Anabel’s mother, Nancy Martinez, who runs the concession stands for Trinity Junior High School’s band, asked me if I could help her at the football games. I’ve worked the scoreboard for football games, sat in on saxophone at band practices and directed the band at one football game. I’m not sure how #WheresFatherStephen got started or whether the kids look for me.”

In October, Father Elser was found at the St. Boniface Lawn Social, pouring snow cones to help their parish school. At a recent Immaculate Conception Bazaar, he showed up riding a skateboard.

“I enjoy being with the kids and showing them that priests are normal people,” he said.

Father Elser, who began studying for the priesthood right after graduating from Catholic High School, said his pastor Msgr. Francis Malone and Christ the King associate pastors were a visible presence during his elementary school years, and that “Father Fred” (Msgr. Lawrence Frederick, Catholic High school rector) was a positive role model for all the students there. In his roles as chaplain at Trinity Junior High School and associate pastor at Immaculate Conception, he finds that working side by side with staff and students is a way to honor the priests who inspired him and pay it forward.

Whether he is playing ball with students in the schoolyard or helping them with homework in the afterschool program, he shares their successes, struggles and enthusiasm. As the cafeteria crew can attest to, he’s not afraid to get his hands dirty.

“Father Stephen’s been a very good blessing to us,” Garcia said, “because even at the last minute he’s willing to step in and go the extra mile, helping out even on his day off.”