From agnosticism to a religious calling, 29-year-old follows God's will for life 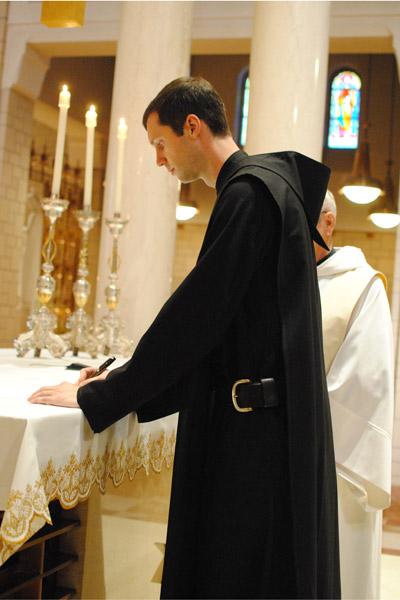 Clifford Heyer’s dreams were not spectacular, but nonetheless important -- get married, coach, write, teach. These were the things he discussed with God on the eight-hour drive to a friend’s wedding in November 2013.

“There was a moment when I thought I could pretty clearly hear God speaking to me, maybe I’m just hard headed” and at 24 years old, needed that clarity. The plan was to listen to music, but 10 minutes in, his phone stopped working so he prayed instead.

“After several hours of that, I thought I was able to get answers, real words,” so he discussed his passions, while also feeling the tug toward religious life. “So I essentially asked can I go down the married route, write and teach and coach. The response was you can be successful and it will be great but ‘you know what I want.’”

Hardly a peaceful awakening, “it was pretty shortly followed by a string of profanities … but I knew I was going to do it after that. I thought it would suck and be a life of pain and sacrifice and Lent forever … But it’s a pretty happy one. Once you actually get up and do what you’re supposed to do, you’re happy.”

Brother Raban Heyer, 29, made his final profession at Subiaco Abbey on Dec. 22.

While laying prostrate as the litany of saints were sung, “it was in that moment of recognition, this is it and at the same time all my family, a lot of my friends, students, coworkers, all the monks were there praying with me and for me so to me. I love my students very deeply; having them all as altar servers was pretty special to me,” he told Arkansas Catholic on Dec. 27.

The bonds of brotherhood were ingrained early as the second oldest of seven children to Charles and Ellen Heyer. Growing up in the Midwest, he remembered his father leading nighttime prayers -- Our Father, Hail Mary, Prayer to St. Michael.

“We thought it took ages but it probably took three and a half minutes,” Brother Raban said. He attended four high schools, his favorite Immaculate Conception Apostolic School, a boarding school in Center Harbor, N.H.

“It connected me to my faith, gave me a lot of the foundation I’m still building on today,” he said. But the constant moves causing a lack of stability made him lose touch with God. As a freshman at Benedictine College in Atchison, Kan., he was agnostic.

“I missed Mass that first Sunday and it started a chain of events I never bothered to pull myself out of,” he said. “… At that time my priority was myself, I was just trying to entertain myself and feel happy and it didn’t work out for me. I enjoyed myself alright, but I didn’t feel complete at all.”

But his senior year college roommate, who attended his solemn profession, encouraged him to attend Mass and that push brought him back to his faith.

Brother Raban graduated with a Bachelor of Arts degree in English, with a philosophy minor, and longed for stability. By the age of 25, he had moved more than 40 times.

“My moving around was primarily the result of different jobs, both mine and my parents. A handful of my moves were because I found better, cheaper living accommodations,” he said. “When I first considered a vocation, I wasn't fond of the idea of being a diocesan priest and being moved every six or so years. Now, one of my vows is stability, which includes permanence in this place and this community.”

He applied for Catholic teaching positions throughout the country and settled on St. Joseph School in Pine Bluff. After the school closed in 2013, he began teaching at Christ the King in Little Rock.

“Love,” he said was the biggest spiritual lesson he’s learned from students. “I don’t think I really understood it before I started teaching; how to really care about what’s best for the other person.”

His laid back, honest style -- like explaining that composition class would be “the most useful boring class of their life” -- allowed him to connect better to students.

“I mostly try to imitate the college professors … I was always annoyed by the teachers in high school that nagged students,” he said.

Brother Raban came to Subiaco September 2014 and entered the novitiate in February 2015. He currently works as the track and cross country coach, an English teacher and chair of the English department. He’s currently working toward his master’s in English.

“I’m here to cultivate this formal attitude of education. But when I coach I try to be much more present with them, I run with them, I goof around. I’m never necessarily out to win, I’m not that competitive, I was more into helping them reach their potential no matter what that was,” he said.

“I doubt there are many people who can honestly say they did,” he said. “My dad would take the oldest three boys running, biking with him from a young age. The kids would take turns on a bike while he ran the whole way.”

From elementary school through high school, he ran competitively, enjoying the company of his team more than the actual running. In college he ran for fun in his junior year and after coaching at St. Joseph in Pine Bluff his passion grew, he said. He also coached track and cross country at Christ the King and helped coach track at Catholic High School in Little Rock.

Brother Raban felt the tug toward religious life after finishing college, though he had no desire to be a priest, knowing he’d feel “trapped in a parish” while also dreading the constant moves.

“I think even after I found Subiaco I was very hesitant about any vocation. I saw it as giving up what wanted to do which isn’t easy,” he said. “But here I am giving up everything … and now I’m doing everything I wanted to do.”

He has written four fantasy novels and about two dozen short stories. Even his chosen name, Rabanus Maurus, fits perfectly into place. Rabanus Maurus was a Benedictine abbot, archbishop and his scholarly work in regard to grammar and literature played a key role in the development of the German Language, making him known as the “Teacher of Germany,” according to Britannica.com.

“I was writing a short story a day in the life of a monk pre- novitiate retreat,” and came across the name Rabanus online. “I didn’t even know it was a real person, but I couldn’t get the name of out my head.”

Upon further research, he felt a connection with him.

“I finally asked him to pray for me,” and like a key fitting a lock, “it just clicked into place and that was it,” Brother Raban said.

Though he didn’t initially receive his calling to religious life easily, “I never felt as if I had anything taken from me,” he said.

“The culture here was just such a good fit for who I am and what I need. Just like with a spouse or significant other, you start checking all those boxes that make you better,” Brother Raban said. “There’s a pretty long list of check marks in the ways this place makes me a better person.”