‘Joan of Ark.’ moves, leaves behind legacy in social justice 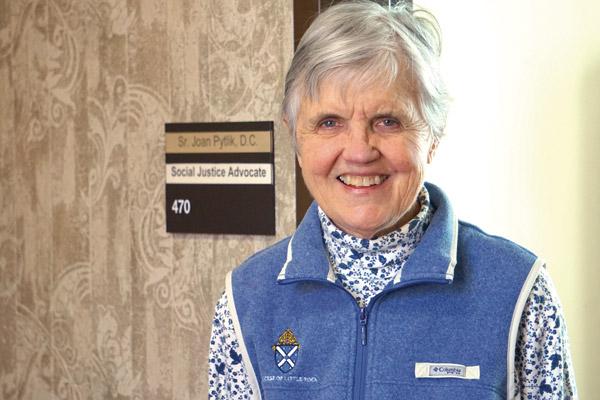 Aprille Hanson
Sister Joan Pytlik, DC, stands by her diocesan office after packing up Dec. 28. After 28 years of advocating for social justice in Arkansas, she is moving to Indiana for health reasons.

Aprille Hanson
Sister Joan Pytlik, DC, stands by her diocesan office after packing up Dec. 28. After 28 years of advocating for social justice in Arkansas, she is moving to Indiana for health reasons.

In the middle of her senior year in nursing school, Joan Pytlik, 20, boarded a train in Milwaukee bound for St. Louis to become a postulant with the Daughters of Charity.

“There was another girl on the train too and she had, I call them, all 10 points. We had to bring certain things like a black blouse and skirt and black stockings and Oxfords. She wore it all on the train and me I’m in my red high heels,” she said. “She lasted about two weeks and now here I am 57 years later.”

For 28 of those 57 years, Sister Joan Pytlik, DC, has been the local “Joan of Ark.,” fighting for social justice in the state with the same crusader’s attitude of her patron saint.

“Partly I think it’s just in me. I’m my patron saint, Joan of Arc, so always for the cause,” she said. “… When you combine that with my vocation of passion for the poor and oppressed, those are the causes I fight for — immigrants, the death penalty, anybody that’s marginalized by society. It’s in me to fight.”

Because of mold allergies leading to respiratory health issues, Sister Joan moved to Evansville, Ind., this month to live at a Daughters of Charity retreat house.

When she first came to Arkansas in 1990, Sister Joan, 78, helped start St. Elizabeth Health Center in Gould, which still provides health care to the poor.

She became director of Helping Hand in Little Rock from 1992-1994 and worked on a bill that allows nonprofit organizations that provide free food to the poor to be exempt from sales tax.

“That’s when it got into me that changes can be made,” Sister Joan said.

From 1995 to 2004, Sister Joan served as the diocesan director of social action. Some of her other roles in the state included coordinating long-term recovery for evacuees of Hurricane Katrina; regional spiritual advisor for the Society of St. Vincent de Paul; serving as minister for religious at the diocese from 2011 to 2017; and as diocesan social justice advocate since 2017.

Her work to abolish the death penalty has been closest to her heart.

“I’ve been working on it for over 20 years,” she said. “We don’t appear to make a lot of progress; however, progress more or less comes from the outside, like the Supreme Court.”

Her choice of parish for the past 25 years, St. Bartholomew Church in Little Rock, one of just three historically black parishes in the state, has been a lesson in welcoming.

“What we’re doing is ‘Jesus this is my body given up for you, this is my blood given up for you,’ so we’re saying the same thing but all these people really suffered for justice and I haven’t,” she said. “That they would take me in and I could be there with them to worship, it’s the real meaning of the Eucharist I’d say.”