A Catholic you want to know: Mike Ferguson 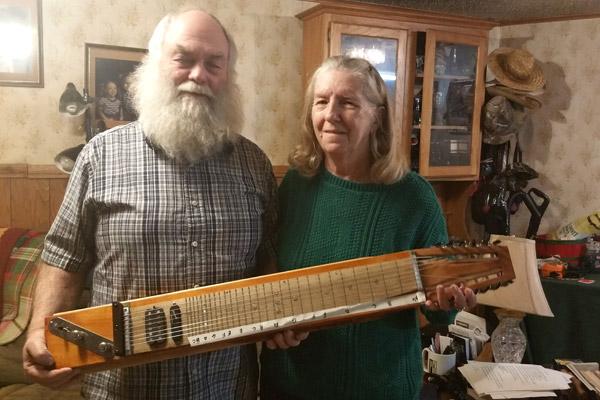 Maryanne Meyerriecks
Mike and Rita Ferguson stand at home with one of his handcrafted instruments, a “lap steel” that he is teaching himself to play.

Maryanne Meyerriecks
Mike and Rita Ferguson stand at home with one of his handcrafted instruments, a “lap steel” that he is teaching himself to play.

Why you want to know Mike Ferguson: Ferguson, who converted to Catholicism in 1998, has shared his many gifts and talents with the Catholic Charismatic Conference, playing music with a group for 18 years. In his parish, he has been a substitute musician, Eucharistic minister and religious education teacher. He is a member of the Knights of Columbus fourth degree assembly and Our Lady of the Assumption, Booneville Council. He has helped a number of Asian immigrants learn English and become citizens and is currently helping Dominican Sisters Maria Lieu Hoang and Maria Hoa with the written English skills they need to succeed at the University of Arkansas-Fort Smith. He and his wife Rita have been going to weekly adoration for 20 years. In his home recording studio, he has recorded a praise and worship CD, which includes four original compositions, played on guitars and instruments he has built himself. As part of his care for God’s creation, he has taken up beekeeping and is working, with many other beekeepers, on ways to eradicate the small hive beetles that are contributing to bee extinction.

Family: Married to Rita; one daughter and one son

Career: Retired from Southwestern Bell, where he was a cable repairman

What feeds you spiritually?
Rita and I have gone to adoration every Saturday since the adoration chapel at St. Boniface (Church in Fort Smith) opened in 1998, only missing when we were out of town. Praying together at adoration has brought us through many difficult times. I’m learning more every day at conferences and reading God’s word.

What brought you to Catholicism?
Rita and I got married in 1979, but I continued to be active in the Baptist church for another 15 years. Gradually I began to think what I heard didn’t sound like Christianity. It took me four years to complete RCIA because of my work schedule, and I became a Catholic in 1998. Father Placidus Eckart, who was the pastor at St. Boniface Church, played a big part in my conversion. Catholicism was more spirit-led than the Baptist church. … Most Christians try to muddle through this life on their own power without relying on the power of the Holy Spirit. If you trust in the Spirit and allow it to move at will, the Spirit will work miracles every day — every time someone comes to faith or is led to do the right thing it’s a miracle.

How did you come to work with Asian immigrants?
When we met the family who owns a local Chinese restaurant, we became friends and were called to mentor them in English and citizenship. They are like our son and daughter, and their children are like grandchildren to us. We have also helped their employees learn English and become citizens. The Dominican sisters in our parish are studying at the university and need help with editing and proofreading their papers and adjusting to the cultural differences between Vietnam and the United States.

What is the guiding principle of your life?
We try to live by the Golden Rule and treat everyone we meet the way we would like to be treated.