The Kehners have built up athletic program at St. Theresa, will soon say goodbye 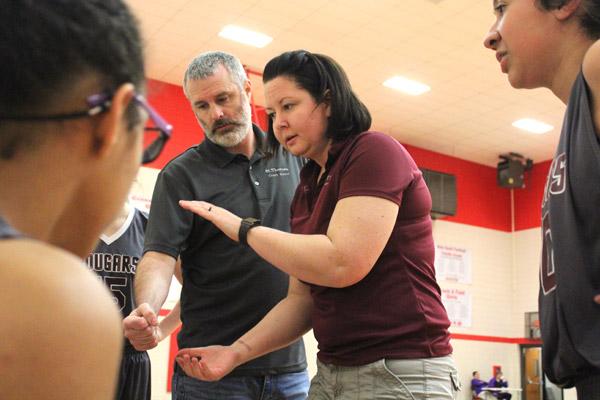 Dwain Hebda
Coaches Brian and Elisha Kehner bring it in for a huddle during a recent road basketball game. The couple has coached teams and served as St. Theresa School’s athletic directors for four years.

Dwain Hebda
Coaches Brian and Elisha Kehner bring it in for a huddle during a recent road basketball game. The couple has coached teams and served as St. Theresa School’s athletic directors for four years.

It’s game night in Little Rock. For a few bucks and a bag of popcorn, fans get a full evening’s entertainment watching Parochial League basketball teams square off. Classmates chatter and grandparents beam. It’s a tradition that goes back generations in the Diocese of Little Rock.

St. Theresa School’s girls are competing tonight against the host Our Lady of the Holy Souls. Two grades of Cougars are near-mirror images of one another in their style of play, scrappy to the buzzer. It’s just the kind of thing Elisha Kehner wants to see.

“These kids come to every practice and they give 100 percent,” she said. “They still show up. The fact that they still show up, no matter what the outcome, is so inspiring. They have a goal and they work at it. I think that’s amazing.”

Kehner’s passion for St. Theresa School has been the ready calling card for both she and her husband Brian who together have served four years as co-athletic directors for the southwest Little Rock school.

“Our school didn’t have an athletic director. Our principal was having to dual-hat it,” Elisha recalled. “We asked if there was anything we could do to help because we think athletics are extremely important and we didn’t want anything to suffer because (the principal) was being so overworked.”

“She was like ‘I need an athletic director’ and we were like ‘Can we do it together? We work much better together than apart.’ And she said, ‘That would be great.’”

St. Theresa’s isn’t a particularly large school, but the new ADs set lofty goals anyway: to offer the same sports experience as any school in the diocese.

Delivering those benefits through the athletic program took money, as the school’s equipment was in sore need of upgrading. The Kehners believed decent basketballs or a new volleyball net invested kids with pride in their teams and their school.

“When we started out, we inherited whatever basketballs the PE program had, same with volleyball,” Elisha said. “Every year we tried to find some way of getting newer equipment for everything. We went to our parents, we went to some of the businesses around, we asked families if they would donate something — time, money, anything they could do to help.”

The Kehners left no stone unturned and it paid off. In their time at the helm, they secured new basketballs, volleyballs and a new volleyball net largely paid for through an invitational volleyball tourney they founded in 2018 to benefit the athletic program.

They also looked to upgrade competition opportunities, adding track and cross country to the roster of the school’s teams. They capped things off with new uniforms, stylish anthracite gear that gives St. Theresa’s an unmistakable look wherever they compete.

“Those new uniforms; when the kids got those, they were a little bit more invested,” Brian said. “Just to have everything on hand that was as new as possible made them more interested in what they were doing.”

The couple’s work spilled over into the stands. Parents began to mirror the one-for-all attitude of the players, getting to know each other despite cultural or language differences.

“I use my mom as an example. She used to come to watch games and she’d be by herself. Now she’s right in the middle of people that, four years ago, she didn’t even know. She can’t speak a lick of Spanish, but she gets along so well with our other parents. It all has to do with our kids playing sports together.”

Such things are the legacy the couple will leave behind at the end of the school year. The Kehners’ eighth-grade daughter, Elizabeth, plays basketball, volleyball and runs track and the duo have coached her in addition to their other duties. With high school looming, they’ve decided to let someone else take the wheel.

Tonight their squad has a tough time against the home team. The Wabbits press well and execute better than St. Theresa’s and, nearly doubling the Cougars’ six-person roster, can platoon fresh legs at will.

Still the visitors fight, grabbing rebounds, forcing turnovers. When the buzzer sounds no one hangs their head — they may have lost, but the point margin was less than half what it was earlier in the season, a stat that brings out smiles and high-fives.

“We don’t always win a whole lot of games, but you know what? Even when they lose by 20 and 30 points, they never give up,” Elisha said. “As an adult, when you see so many adults that have given up or they just stop caring, it’s so refreshing to see that. You hope that you’ve instilled something where they continue with that. That for the rest of their life, they’ll never give up.”