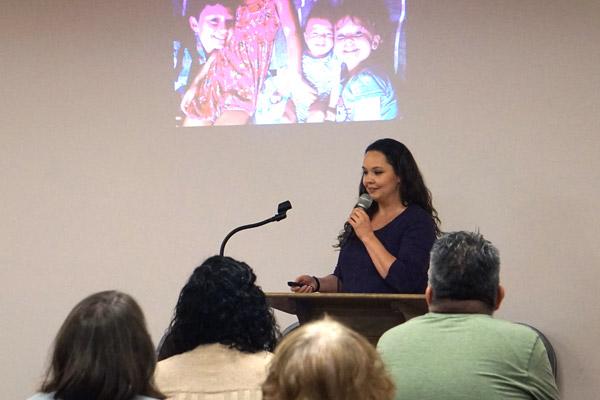 Aprille Hanson
Caryn Hoyt, sacrament coordinator at St. Joseph Church in Conway, tells the first Hearts for Life conference Jan. 19 the story of her daughter Gemma, who died from a genetic disorder at 30 weeks of pregnancy.

Aprille Hanson
Caryn Hoyt, sacrament coordinator at St. Joseph Church in Conway, tells the first Hearts for Life conference Jan. 19 the story of her daughter Gemma, who died from a genetic disorder at 30 weeks of pregnancy.

When Caryn Hoyt, sacrament coordinator at St. Joseph Church in Conway, was pregnant with her second child, two images remained with her. One was a dream, replaying the scene from the popular 2008 movie “Marley and Me,” where character Jenny Grogan (played by Jennifer Aniston) suffers a miscarriage. The other came during a silent retreat on March 25, 2011, the feast of the Annunciation, at St. John Center, a vision of looking down at herself weeping while Jesus was sitting next to her.

“He takes my hand and places it on his heart. He’s holding my hand next to his heart and I can feel his heartbeat on my hand. Then he says to me, ‘See how my heart beats for you.’ And then he said, ‘Remain in my love.’”

The sheets around her in the vision became blood soaked and when she tried to pull away her hand, he held it to his heart. She soon saw her family standing around her.

“I knew the Lord had done that to prepare me,” she told the 27 attendees at the Hearts for Life Conference at St. John Center in Little Rock. “I think he did that because he knew that it would have crushed me otherwise.”

“I feel like God’s message to us through Gemma’s story is that these children are not mistakes.” Caryn Hoyt, speaking to the Hearts for Life Conference Jan. 19

During that March retreat, she had been contemplating 1 John 4:7-12. Almost four months later, it was the day’s reading for July 1, 2011, when her daughter Gemma died.

Hoyt was one of the speakers at the first diocesan Hearts for Life Conference Jan. 19-20.

The conference, geared toward adults and families, began at 5 p.m. Jan. 19 and ended the next morning with the Eucharistic procession and Mass for Life in downtown Little Rock to complete the pro-life weekend. While the Catholic Youth Ministry Office has hosted a teen Weekend for Life for years, respect life director Catherine Phillips also wanted to offer a similar event for adults.

The conference included exposition of the Blessed Sacrament and adoration throughout the night, a Novena for Life and a variety of speakers, including a panel exploring end-of-life issues with Sister Chabanel Finnegan, RSM, Catholic Charities of Arkansas executive director Patrick Gallaher and Phillips. Deacon Matthew Glover, diocesan chancellor for canonical affairs, gave a presentation on pro-life legislation.

Hoyt shared the powerful reality of remaining pro-life in the face of an adverse pre-natal diagnosis. During an ultrasound, she and her husband Ben, her high school sweetheart, learned there was an abnormality with their child. Later, it was revealed their baby girl had Trisomy 18, an extra chromosome 18, causing an opening at the base of her spinal cord and other life-threatening issues. A specialist told them three different times that the “most viable option would be to terminate her, to abort her,” Hoyt said.

“It made me so angry because we went to him for help and he told us our baby was probably going to die and he offers to expedite the process,” she said.

Despite Caryn enduring severe blood clots and little hope of saving Gemma, named after St. Gemma Galgani, the Hoyts would not terminate the pregnancy. During a visit from a healing priest to her parish in June 2011, Hoyt heard Jesus’ words clearly “He said, ‘I don’t make mistakes. There’s nothing wrong with Gemma. This is how I made her to be.’”

At 30 weeks’ gestation, Gemma Marie Hoyt passed away on the feast of the Sacred Heart.

“I got to hold her, even if she wasn’t alive,” Hoyt said.

“I think it’s nine out of 10 babies that are diagnosed with a disability or handicap or some type of condition are aborted,” Hoyt said. “I feel like God’s message to us through Gemma’s story is that these children are not mistakes. ‘I’m the God of life, I get to decide if they’re going to live or if they’re going to pass, but their life has meaning and I don’t make mistakes’ and we have to honor that.”

Today, the Hoyts have four children and two in heaven, Gemma and Cameron, who died as a result of an ectopic pregnancy on the feast of St. Gemma.

Naomi Lee, campus minister at the University of Arkansas at Fort Smith, wiped tears from her eyes during Hoyt’s presentation. Lee, 23, came with student Claire Hollenbeck, 18, of Fort Smith and her friend Chandler Vail, 18, from North Little Rock who traveled from Mississippi where he attends college.

“It’s such an issue with our generation. Almost everyone I know is not pro-life,” Lee said, adding she has friends “who have had abortions,” and that a conference like this allows her to grow in knowledge, to stand firm in her beliefs.

Missouri could become first state with no abortions