Weekend for Life preparing next generation of advocates 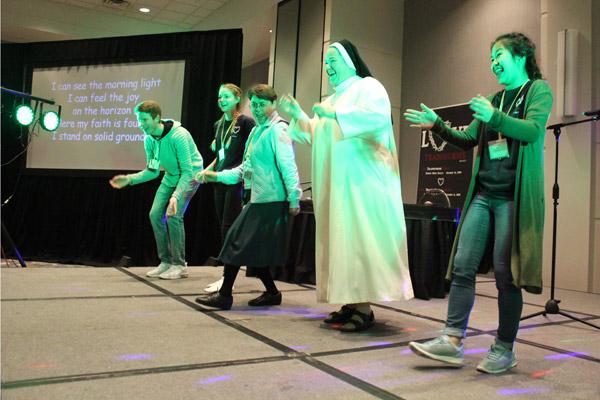 Despite blustery cold weather, the annual Weekend for Life drew more than 300 Catholic youth and their sponsors to Little Rock Jan. 19 and 20. The event, sponsored by the Diocese of Little Rock’s Catholic Youth Ministry Office, kicked off Friday at the DoubleTree Hotel ballroom.

Trish Gentry, program coordinator, said she was pleased with the turnout given the winter weather that struck portions of the state earlier that day.

“We had a lot of parishes that still braved the weather; we only had a couple that cancelled,” she said. “The teens have done an outstanding job planning this year’s event. I think it’s probably one of the best groups as far as their prayer services, the videos that they’ve played. I thought our speaker was outstanding.”

Julianne Post, a member of St. Mary Church in Altus and a member of the diocesan Youth Advisory Council, said participating in Weekend for Life has helped her grow as a Catholic as well as a pro-life individual.

“(These events) have taught me a lot more of the options for women and that there isn’t just one way out of a situation that they didn’t mean to be in,” said Post, a 17-year-old senior. “It’s a lot more education about issues and how to deal with them the way we believe in as Catholics.”

“I hope (attendees) come away with the courage to maybe talk to their peers and encourage them to become pro-life or at least to consider the idea of becoming more open to the idea of being pro-life.”

Post and her peer YAC members are central to the event, performing original skits, leading prayers and producing the videos that were shown on a massive screen in one corner of the ballroom. They sang and danced almost non-stop throughout the evening’s program, with music provided by Team Jesus, a teen music ministry of Christ the King Church in Little Rock.

“This is my second time to be at this event,” said Abbey James, a 16-year-old junior and YAC member from Pocahontas where she attends St. Paul Church. “The first time I came I really enjoyed it because when we went and marched around the capitol, I really gained perspective of what it means to be pro-life. Back at home, I have a few of my friends who are pro-choice and I’m able to tell them how I’m pro-life and our side of the story.”

YAC member Anthony Reiter, 17, was attending his first Weekend for Life event. A member of St. Mary Church in Hot Springs, Reiter said both in the preparation and through the event itself he’s gained a better perspective on issues, bolstered by his fellow teens.

“I’ve had some really good conversations with some of the other team members. It helps me to have a wider perspective,” Reiter said.

Gentry said the continued strong participation by diocesan youth in the Weekend for Life event was a good sign for the future of the pro-life movement.

“We want the kids to come away with the belief that anybody could stop an abortion or make someone think about it or talk about it, give them other options,” she said.

“I mean, look at these kids. They’re amazing. They are the ones who are going to be our future, they could be the ones that change the law. They can be the generation where being pro-life is the norm in society.”