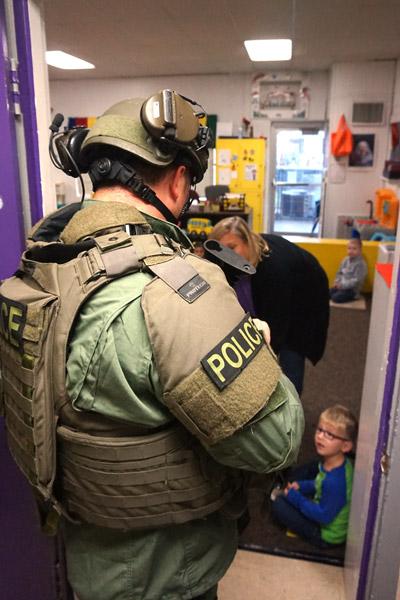 Arkansas Catholic file / Aprille Hanson
A Conway police SWAT officer looks at a student on the floor while checking elementary rooms at St. Joseph School in Conway. The Nov. 5 training al-lowed the SWAT team, teachers and students a chance to assess their intruder emergency plans.

Arkansas Catholic file / Aprille Hanson
A Conway police SWAT officer looks at a student on the floor while checking elementary rooms at St. Joseph School in Conway. The Nov. 5 training al-lowed the SWAT team, teachers and students a chance to assess their intruder emergency plans.

Coach T.J. Barnes is used to mapping out various scenarios in his head. As athletic director for St. Joseph School in Fayetteville, having a game plan is crucial. But while participating in an active shooter drill, those preconceived ideas of what he would or would not do were discarded.

“There’s no way to prepare for every single scenario and everyone responds to every scenario differently,” he said. “… It makes you think of many different solutions to the scenario that’s presented instead of the one scenario in your mind.”

In August, about 40 teachers and parish staff at St. Joseph School and Church participated in a live intruder scenario, part of ALICE Training Organization Certification, a nationwide training to prepare individuals and entities in the event of a violent intruder.

It is one example of how Catholic schools in the state are rethinking intruder crisis plans given the prevalence of gun violence in today’s society.

For a year, The Washington Post analyzed how many children had been exposed to gun violence during the school day since the 1999 Columbine High School massacre that left 15 dead, including 12 students and a teacher, and 21 injured. The two shooters, seniors at the school, committed suicide.

“Violent intruder procedures are changing constantly,” said Jason Pohlmeier, principal at St. Joseph, adding that the traditional hunker down and hide that was standard “10 years ago is now completely out the window.”

St. Joseph School faculty first trained under the ALICE program through a local police department, learning the key tenets of “alert, lockdown, inform, counter and evacuate” in 2012. Pohlmeier, who became principal in 2014, said the school has 315 pre-K-eighth grade students.

After 20 first graders and six adults were killed at Sandy Hook Elementary in Connecticut in 2012, he said, “I remember even among principals and teachers’ professional development there was a big shift after Sandy Hook. They started taking it seriously.”

Since Sandy Hook, school security has become a $2.7 billion market, which does not include money spent on armed school resource officers, according to a Nov. 13 Washington Post article. As part of the ALICE organization certification, St. Joseph paid $1,900 for the first year, which included a two to three-day training session in Oklahoma for Pohlmeier to become an ALICE certified instructor. Annual recertification is $900.

“We do fire drills every month. All schools are required to do that … but when is the last time a student has died in a school fire? That’s going to make national news,” he said, admitting he’s never heard of it happening. “However, I can easily list 10 different schools that have had school shootings.”

“ALICE kind of makes this point. What they look at in school intruder safety, they say we’re about 100 years behind fire safety in terms of development” on a national level, he said. “You can imagine how much more concern you’d have about fire in the 1920s.”

Teachers and parish staff — which all work in the same space as the school and parish offices are in the same buildings — completed online training and participated in the live scenario in August.

With assistance from Washington County Sheriff’s Office Sgt. Arlo Guthary, an intruder holding a Nerf gun breached the campus while the teachers and staff practiced barricading doors, evacuating, throwing objects to stop an intruder as well as tackling an intruder in classrooms and the cafeteria. With most Nerf gun shots, Sgt. Guthary also fired his weapon using blanks, so participants would know the sounds of gunshots echoing in the halls.

Participants were able to test out various techniques in the moment, including the traditional lockdown — shutting off the lights and huddling in a corner.

“The intruder walked in and shot people huddled in the corner,” Pohlmeier said, while instead with evacuation, it took everyone 30 seconds to evacuate and the intruder two minutes to approach a classroom. The ALICE program “really capitalizes on your natural fight-or-flight instinct.”

During the discussion following the scenarios in the cafeteria, Pohlmeier also had earlier chosen Coach Barnes to be a surprise “shooter.”

“It takes your brain a little bit” to understand how to react, especially, as is often the case with violent school intruders, it may be someone that is recognizable, Pohlmeier said. “There’s a natural hesitation of ‘I know this person; you shouldn’t be doing this.’”

Barnes said he was able to shoot “six or seven people” before being taken down, just using the element of surprise. Among the many valuable lessons learned from the training, Barnes said his mind was “completely changed” on arming teachers.

“I was a big proponent of the teachers using concealed carry” weapons in the classroom, he said. “But after listening to the training and listening to what the cops had to say … If they see someone with a gun they’re going to eliminate the problem.”

Pohlmeier has given two presentations on ALICE to principals at the Catholic schools in Arkansas. Those presentations, combined with society’s ever-changing culture in regard to violence, has left many reevaluating what they do.

Principal Buddy Greeson, of Sacred Heart School in Morrilton, pre-K3-12th grades, said they hope to have local law enforcement lead the school through an active shooter drill this year, adding that he most often hears from parents regarding crisis plans.

“They want to make sure their kids are safe when they drop them off and that we do have a plan to combat anything,” he said.

Jeff O’Neal, Subiaco dean of men and head soccer coach, organized and led the drill. Before teaching, he spent 25 years as a U.S. Army field artillery officer, retiring as colonel. He completed three tours in Iraq.

“I’ve seen firsthand that soldiers, when placed in stressful situations such as combat, will instinctively revert back to their training. Unfortunately, in today’s society, our faculty and staff have to be prepared to confront violence at school,” O’Neal said in an email while on a recruiting trip in Korea.

Subiaco junior Jacob Friemel, 16, and sophomore Blake Zimmer, 15, were two of three student volunteers who played wounded victims, from a head laceration to being shot in the right thigh, hitting the femoral artery. Both students agreed that they felt safer seeing how well everyone worked together during the training.

“Technically speaking it can happen at any moment, you never know. I can say I’m not really worried,” Friemel said, with Zimmer adding, “It’s a very real threat to everyone. To think nothing could happen to us is preposterous,” which is why the training was important.

Sharon Warren, principal at St. Mary School in Paragould, said the local public school resource officer gave a presentation to St. Mary teachers and faculty on the key components of ALICE a few years ago. Last school year and again in the fall, teachers practiced evacuating the 75 pre-K3-sixth grade students out classroom windows.

“I think from the violent acts that have happened in schools and other public places and the research and studying of those has proven that our plan of hunker down and hide, which was what we started with years ago, is not effective,” she said.

For about five years, Immaculate Conception School in Fort Smith has practiced intruder drills. But after the shooting at Marjory Stoneman Douglas High School in Parkland, Fla., Feb. 14 last year that left 17 students dead, the idea of hiding was reevaluated. In August, faculty and staff were trained by Sheriff Bill Hollenbeck to not be passive. The students do about five intruder drills a year.

“You throw a book, you throw anything you can. … We talked more about having the students not in a single line going through one point through the typical exits. Going out the windows if possible, looking at different ways to evacuate,” said principal Sharon Blentlinger.

On Jan. 14, a team from Mercy Hospital Fort Smith and three city firefighters trained teachers through the “Stop the Bleed” program. Blentlinger said staff learned how to stop an arterial bleed, which pumps blood with every beat of the heart, as well as how to make a tourniquet using whatever is available.

“When you do have an intruder or a crisis situation and let’s say the police, if they’re coming into a school they’re not stopping to attend to victims, they’re looking for the shooter,” Blentlinger said, adding that chest compressions will do nothing if a bleed is not stopped. “If it’s a gaping wound, we were told how to stuff, honest to gosh stuff, the wound ... You take a clean shirt and anything and stuff it in that wound and apply pressure” and tie a bandage.

A person can bleed out and die in four to six minutes with an arterial bleed, but can last about four hours when a tourniquet is applied, she said.

Tourniquet kits will now be placed around the school.

“We’ve got to be proactive. We can’t assume because we’re a Catholic school who has wonderful parents and kids you just can’t live in a dream world,” she said.

Kristy Dunn, principal at St. Theresa School, a pre-K-eighth grade school, said the Little Rock Police Department trained faculty Sept. 7 on CRASE, Civilian Response to Active Shooter Events. They plan on having a drill involving students in the future, but have since also given each staff member walkie-talkies and altered drop-off, pick-up points.

“Probably not a week goes by when we don’t hear about some instance of gun violence in our country,” Dunn said. “I had each staff evaluate their space. How would you run, flee from this area? What would you fight with in this area?”

Junior high teachers got feedback from their students, discussing different scenarios that could happen in the classroom and what to do.

“They like knowing that there are options because they have been uncomfortable with a simple lockdown for a while,” Dunn said.

Out of the 190 students at St. Theresa, 82 percent are Hispanic, with several having immigrated to the United States. It changes the mentality around active shooter drills, Dunn said, as many automatically believe it’s safer here.

“For some of them we’re kind of crazy to be honest,” because the violence “in Latin America is astronomically higher than in the United States. So just coming here is banking on the fact that my kid has a better shot of staying alive,” she said. “For students that are immigrants or recent immigrants, they feel safe. There doesn’t seem to be a concern that danger is going to come here.”