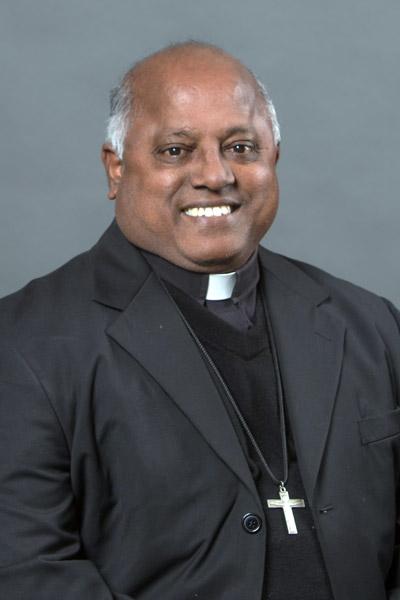 Father Chinnaiah Irudayaraj Yeddanapalli, known by most as Father Y.C., who was happiest serving God’s people from “womb to tomb,” died Jan. 25 from a heart attack. He was 54.

Father Y.C. was born May 25, 1964, the fifth of seven children in a Catholic village in southeast India to Chinnaiah Yeddanapalli and Theckla Mary Yeddanapalli. The family moved to a predominantly Hindu town when his father was transferred as a Catholic school principal, according to a 2017 Arkansas Catholic article celebrating his 25th jubilee as a priest.

When Father Y.C. was 11 years old, he entered St. John Minor Seminary in the Diocese of Nellore, about 200 miles away from his family, whom he’d visit during Christmas and summer.

“All along I never had any doubt that I would become a priest. I was sure. This is the line I’m going to follow. Somebody asked me, ‘What would you have become if not for a priest?’ I said, ‘I would have become a professional soccer player.’ I was good at sports,” Father Y.C. told Arkansas Catholic in 2017.

After his ordination on May 6, 1992, at St. Joseph Church in C. Nammiandal, he served as vice rector of St. John Minor Seminary. He went on to serve as a pastor and in several ministries, including deputy director for diocesan schools and prison ministry, the article stated.

He came to Oklahoma in 1999, serving in three parishes. It’s where he met then-Father Anthony B. Taylor, who was the vicar for ministries overseeing international priests for the Archdiocese of Oklahoma City. Father Y.C. returned to India in 2005 but came back to the United States in 2013 upon the request of Bishop Taylor.

“Father Y.C. was a very fine priest and always willing to serve in any way possible,” Bishop Taylor said in an email to Arkansas Catholic Jan. 28. “He had a deep spirituality and a very generous heart. I will miss him greatly.”

“My motto is ‘bloom where you’re planted.’ What you are given, I take it, the responsibility and do it until I achieve the new goal,” he told Arkansas Catholic in 2017, later adding. “I’m happy as a priest, that God has chosen me.”

He is survived by his father, Chinnaiah Yeddanapalli, and his siblings.

A Mass of Christian Burial was held at St. John the Baptist Church in Hot Springs Jan. 30. Burial will be in Nellore, India.

Hot Springs students can get a free ride to Little Rock

More than 500 in Hot Springs honor Our Lady of Guadalupe