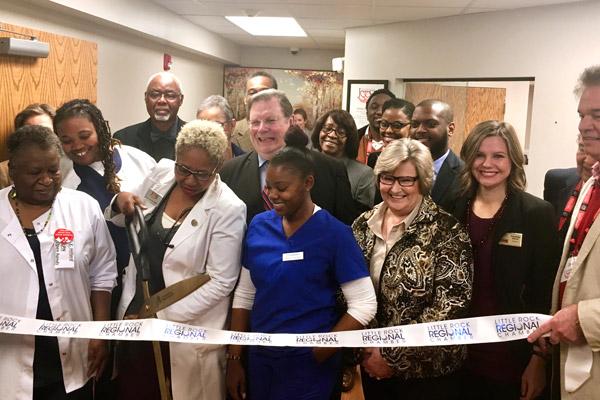 Chief executives for both organizations called the addition a welcomed boost of services to the estimated 150 homeless persons who crowd the building at 3000 Springer Blvd. every day.

“The thing is, it is better for the clients we serve because the day resource center is supposed to be a one-stop shop,” said Sandra Brown, JCCI CEO. “That included providing a medical clinic. That was the whole purpose.

“Open Hands clinic has been around since 2001 and as the city became more engaged in trying to work with the homeless and provide resources, they saw that it was better to relocate the clinic to that site.”

“It is better for the clients ... because the day resource center is supposed to be a one-stop shop.” Sandra Brown, CEO of Jefferson Comprehensive Care System

Mandy Davis, director of Jericho Way, said the addition of medical services in the building’s lower level rounds out the offering of the organization without the need to bus individuals all over town.

“What’s helpful is, if we’re seeing you to try to get you into drug and alcohol rehab for 90 days but you need to get your medication filled and you don’t have the prescription, I can now send you downstairs to do that so that you feel more ready to go to rehab. And we can do it that day,” Davis said.

The 1,300-square-foot medical clinic performs a wide range of primary care while providing referrals to more complicated medical conditions or for mental health. Open Hands previously operated out of a retro-fitted house at 1225 Martin Luther King Drive in Little Rock and the two organizations shared many of the same clientele, which is why the clinic was operating immediately, Brown said. She said the new location, open five days a week with extended hours on Monday, is already seeing an uptick in walk-in traffic.

Coordinating the two organizations has been smooth, Davis said, largely thanks to a shared mission of service.

Jericho Way is operated by Depaul USA of Chicago, one of seven subsidiaries of Depaul International. Last year, the Little Rock resource center served more than 49,000 meals, provided 9,000 shower and laundry services and just shy of 5,000 social counseling sessions. Davis said she’s seen the number of people in need mushroom and expects that growth to continue.

“More than 18,000 Arkansans are without health insurance because of Arkansas Works, a policy to require work in order to maintain your Medicaid benefits,” she said. “That has hit this population very hard. Not only are they in poor health oftentimes, but now they have lost their health insurance and in order to get back on it or be compliant they have to report (to the state) on a computer. The state, in my opinion, took for granted their level of literacy and computer literacy and knowledge. Knowledge is a privilege.”

“In the face of this policy, however, we were able to partner with (Open Hands) that will see you regardless of your ability to pay. It is timely and it is hard for me to believe that providence is not involved. (God) knew before we knew that this was in the best interest of the poor and that is the real story.”