Parishes: Service is top reason to engage with community 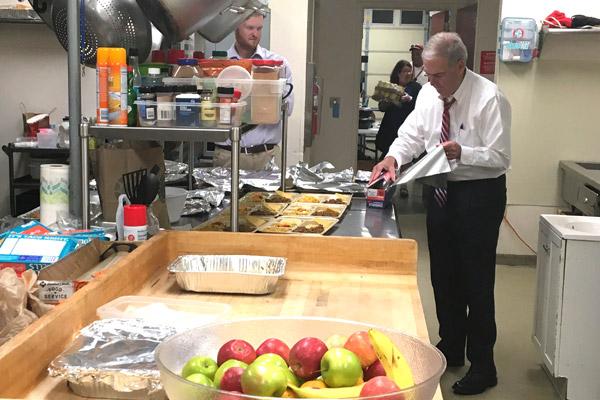 More information about the UALR Little Rock Congregations study and its latest survey can be found at research.ualr.edu/lrcs.

A call to service is the main reason Catholics partner with community organizations to provide services for people most in need, according to the latest data collected for the Little Rock Congregations study at the University of Arkansas Little Rock.

Dr. Rebecca Glazier, UALR associate professor of political science, began a smaller study in 2012, which focused on whether or not clergy urging political involvement led to more politically active congregants. In 2016, the study expanded to political efficacy and how congregations promote community involvement.

In fall 2018, almost 60 students compiled surveys from 111 leaders from congregations, one at each place of worship, throughout Little Rock. There were also 24 individual interviews with clergy. Glazier said the congregations are anonymous, but did reveal that four Catholic parishes in the city participated.

“Those are different things,” Glaizer said, explaining that for some, the “spiritual is connected to physical — the need to feed people, make sure they’re safe” before they can be open to hear the word of God.

“Catholicism might have a stronger ethic of serving first and conversion comes later, if at all,” she said.

On March 6, Glazier will present a summary of findings at UA Little Rock Downtown, which is open to the public. The full report will be released in April, when Glazier and others with the study meet with local clergy to discuss the findings and get feedback on what kind of research would be helpful in the future.

Glazier did reveal key findings where Catholic parishes stood out, which include:

“It’s an interesting finding that the Catholic parishes in particular have this focus on marriage and family relationships,” she said.

• 100 percent of Catholic priests surveyed said they have given sermons about volunteering in the community, while 84 percent of the rest of the sample said they had done the same.

• Only 63 percent of congregations said they have worked with another faith tradition or participated in interfaith volunteering, while 100 percent of the Catholic parishes said they do.

“That stands out a lot compared to the rest of the numbers. That’s much less common,” Glazier said.

• Clergy were asked what they saw as the most important problem facing Little Rock. Responses were grouped into categories, with poverty encompassing answers such as homelessness, lack of jobs and income inequality.

“Half of the Catholic priests who responded to the survey said that poverty was the most important problem facing Little Rock, compared to just 27 percent of the clergy from other religious traditions,” Glazier said.

In addition to the surveys, 22 community spotlight stories were compiled by students that highlight various work that congregations do in their community. Our Lady of the Holy Souls Church was featured for their work with Our House, a shelter for the working homeless. The parish brings dinner to about 80 residents on the first Tuesday and fifth Saturday of the month. More than 60 people regularly volunteer.

“I think Holy Souls and Our House is a great example of how we see congregations in the city identifying these problems and going to nonprofits to try to make life better for people in Little Rock,” Glazier said.

The article quoted Holy Souls parishioner Darlene Hebda, who has helped lead one of three volunteer teams since 2007. She said the most heartwarming moments are being able to provide a nutritious meal for those in need, but also how often they hear “thank you” from residents.

Our House executive director Ben Goodwin said he believes Holy Souls has served meals at the shelter since it opened 32 years ago and has continuously supported the nonprofit through donations and other volunteer opportunities.

“It’s just a faithful support of getting Our House off the ground and providing a really core support through the meal serving program,” Goodwin said. “That’s just pretty incredible and really appreciated.”

Beyond fulfilling an immediate need for meals, Goodwin said “helping people tap into their own sense of self-worth, their own goals, hopes and dreams” is what Holy Souls and other volunteers help to instill in residents. “Seeing the community invest in them, spend time with them and eat with them,” makes a difference.

More information about the UALR Little Rock Congregations study and its latest survey can be found at research.ualr.edu/lrcs.