At milestone win, coach looks back on Catholic school time 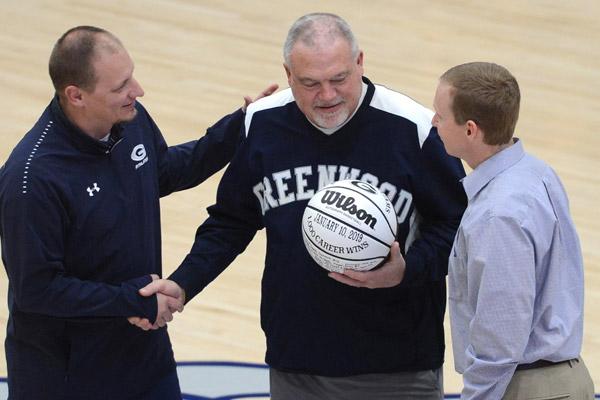 Nearly four decades ago, Ronnie Williams walked into Immaculate Conception School in Fort Smith for the first time as teacher and coach. By his own admission, it didn’t take a genius to spot the Southern Baptist in the room.

“I can remember my first Mass. I’d never been to a Catholic Mass and the kids were singing,” he said. “They were the worst singers I’d ever heard in my life. I started laughing and I couldn’t stop. One of the sisters came around looking at me and I said, ‘I’m sorry, I can’t help it, they’re horrible.’ I wasn’t sure if I was going to get fired or what.’”

Williams survived the gaffe and would soon birth a dynasty from the school’s lackluster basketball program, one that would run for more than 20 years.

“Girls basketball was really horrible,” he said. “They didn’t have really good uniforms and they didn’t do much with them. First couple of seasons we didn’t have a winning record but my third year we were 27-1, lost the last game of the year. From that point on everything was on target.”

“Trinity and I.C. for me, was family. I knew every kid, I knew their sisters and brothers. ... The Catholic school environment is such a close-knit group and I love that part of it.” Ronnie Williams, former coach

Over 26 seasons, Immaculate Conception and Trinity Junior High was nothing short of a juggernaut. Preaching up-tempo offense and aggressive, tenacious defense, Williams’ squads rattled off 68 straight victories between 1991 and 1993. His program was the proving ground some of the area’s all-time high school standouts, winning numerous state titles. When he left the Catholic school ranks, his wins (some with boys, mostly with girls) totaled somewhere around 750.

For all of his success on the court, however, what he witnessed off the court enriched him just as much.

“What I loved about I.C. and Trinity, they allowed me to talk about Jesus every day. I got to pray every day,” he said. “They let me be who I was. All I wanted to do was tell people about Jesus and they let me do it in the way I knew how. Plus, I learned a lot about them and how they do it.”

“The priest there at that time was Father Jack Harris and he told me look, as long as these kids come to know Jesus, that’s all that matters. You’re Baptist, I’m Catholic, let’s do it together. It was a great combination.”

Many coaches preach to their players of the team as family, but in Williams’ case the metaphor was too limiting. It extended far beyond the sports program for him, his wife Pam and kids Logan, Landon and Lunden, all three of whom attended school there.

“Trinity and I.C. for me, was family,” he said. “I knew every kid, I knew their sisters and brothers, I knew their moms and dads, their grandparents. The Catholic school environment is such a close-knit group and I love that part of it.”

It wouldn’t be until he left Trinity that Williams would understand the true depth of what he’d found there. In 2006, he made the difficult decision to accept a job at his alma mater in Greenwood, the same year Pam was diagnosed with cancer. He credits her ultimately beating the disease, in part, to the love and prayers of the place they’d left behind.

“Our friends from I.C. and Trinity, boy, they surrounded us,” he said. “You know who your family is when times get tough. They were so good to me, even though I wasn’t there anymore. They took good care of me and my family.”

Williams’ transition to coaching in the public school system was reminiscent of his first days in the parochial school. Once again, it didn’t take a genius to spot the new guy, this time fresh out of the Catholic environment.

“The public school is different, you know,” he said. “You can’t pray anymore and all that stuff. I miss that. But I sneak in my ways.”

On Jan. 10 Williams’ girls knocked off Van Buren to hand their coach his 1,000th career victory. Along with Greenwood fans, it felt like all of Catholic Fort Smith rejoiced as his phone didn’t stop buzzing for days.

He’s quick to tell you, they’ve since won four more games on the court and, as if he needed to pad his total, he’s well on his way to adding his own bout with cancer to the heap of victories off of it.

In reflection, he confessed the most cherished steps he’s taken to the lifelong rhythm of sports and seasons came in the smallest mercies of his Catholic students.

“In my classes at I.C. and Trinity, we took the first five minutes of every class and we took prayer requests,” he said. “We learned about each other, we prayed for each other. I think more than anything else, it got the kids to understand there’s more to it than just their life. There are other people around us that are important, there’s other people going through struggles who need prayer. To this day, I wouldn’t trade that for anything.”