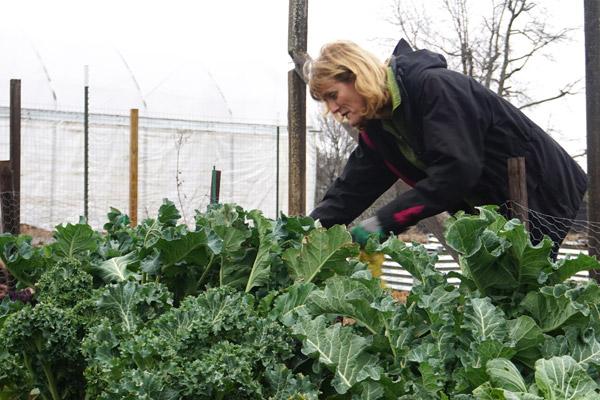 In 2016, St. Joseph Center of Arkansas dedicated a statue of St. Fiacre, the patron saint of gardeners, near the community garden beds. The roughly 8-foot statue, holding a basket of produce, was created by artist Kevin Kresse, whose uncle Matt Kresse had been an elderly resident at the center and became a resident carpenter, doing everything from handy man work around the center to repairing bikes for orphans. Executive director Sandy DeCoursey said Kevin Kresse was “compelled to give something back.”

“And onions,” Landers said, forgetting momentarily to mention the onions growing along the edge of her community garden bed. It’s a snapshot of springtime in the middle of lower 40-degree temperatures and a biting wind.

Landers, a parishioner at Immaculate Conception Church in North Little Rock, is one of a handful of winter gardeners who take advantage of the St. Joseph Center of Arkansas community garden beds all year long.

“It’s important for city kids to have some concept of where their food comes from — how it’s grown and to incorporate nutritious food in their diets. I have yet to meet a kid not willing to at least try something they’ve helped grow,” said Sandy DeCoursey, executive director of the nonprofit established in 2008.

In 2010, the Diocese of Little Rock signed a 50-year lease to the organization to allow the nonprofit to use the 56,000-square-foot historic building and 63-acre property, once an orphanage and later daycare ran by the Benedictine sisters of St. Scholastica.

There were 10 community garden beds established at the center in 2013, thanks to a $5,000 grant from North Little Rock’s Fit2Live Initiative. With more Fit2Live grants each year came more garden beds, bringing the total to 32 this year, with hopes to add 10 more this spring as there’s currently a waiting list for the gardens, DeCoursey said.

For $50 a year, gardeners receive their own garden bed, water, compost, tools and greenhouse space, and seedlings are shared among participants. In order to fulfill grant requirements, gardeners also must document volunteer times and maintain harvest logs. The gardens are open during daylight hours.

Only about three to four gardeners choose to brave the changing weather in the winter, growing crops like greens, beets, carrots and herbs.

“I think winter gardening is an amazing process that allows you to have nice fresh vegetables throughout the winter,” DeCoursey said, adding, “In Arkansas winter gardens are definitely possibilities. If you’re willing to put on covers when needed, it’s amazing what you can uncover in the spring.”

Landers, who along with her husband Scott were instrumental in building the garden beds, admitted that while garden supplies are advertised and marketed for the spring and summer, there are plenty of benefits to gardening in the cold.

“I’m not fighting the bugs as much,” or the sweltering Arkansas summer sun, she said. “You have a lot of fungal diseases when it’s hot, wet and moist. Winter gardening is more forgiving.”

Though most of the garden beds are reserved for private use, one is used for demonstrations, while another is known as the Hunger Relief Garden. In 2015, the center partnered with the nonprofit Arkansas Hunger Relief Alliance and has since donated more than 10,000 pounds of fresh produce to the Arkansas Food Bank.

Beside plant life, bees swarm 12 hives in the St. Joseph Apiary, established by the Landers in 2016. Butterflies gently flutter in the Blessed Bee and Butterfly Pollinator Garden, created in 2017 along with the Arkansas Master Naturalists, and funded with a North Little Rock beautification grant. DeCoursey said it was recognized in 2018 as an official Monarch Waystation.

Goats, sheep, chickens and ducks keep the 63-acre property alive with activity, in addition to the cattle that roam the farmland.

In addition to the greenhouse, three 30-by-96-foot high tunnels — unheated, covered hoop-shaped structures that help extend growing seasons — were constructed thanks to a grant from the Department of Agriculture Natural Resources Conservation Service for urban farming in 2017. Two farmers were hired and raise the produce, which has gone to local restaurants and food networks, and will also be sold at the Farm Stand.

This will be the Farm Stand’s fifth season, open from May to October. From 8 a.m. to noon each Saturday, buyers can buy produce from more than 20 businesses and farms, DeCoursey said. The stand is run by volunteers and money raised goes toward the preservation of St. Joseph Center.

“We feel the Farm Stand is not just a great source for locally grown produce, but an opportunity to meet new people, a source for community gatherings,” DeCoursey said.

New ideas are in the works, including opening more than one day a week, longer afternoon hours, opportunities to feed the cattle and to learn about life on the farm.

“I just think it’s a really great experience to come out to the farm and experience people, wander through the gardens, feed the animals. It’s a slower-paced environment,” she said.

For more information about volunteering, donating or a community garden bed, call (501) 993-4560, email or visit stjosephcenter.org.

In 2016, St. Joseph Center of Arkansas dedicated a statue of St. Fiacre, the patron saint of gardeners, near the community garden beds. The roughly 8-foot statue, holding a basket of produce, was created by artist Kevin Kresse, whose uncle Matt Kresse had been an elderly resident at the center and became a resident carpenter, doing everything from handy man work around the center to repairing bikes for orphans. Executive director Sandy DeCoursey said Kevin Kresse was “compelled to give something back.”