Saldana’s ministry to first responders a mission from God

4,849 prayer cards, necklaces dedicated to St. Michael given to those who serve 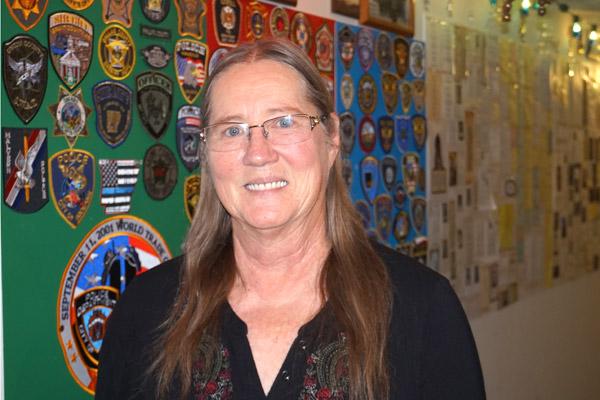 Aprille Hanson
Donna Saldana, parishioner at St. Joseph Church in Conway, stands by her prayer wall, filled with patches from law enforcement and first responder departments throughout the state and prayer intentions. She has handed out almost 5,000 St. Michael necklaces, thank you notes and prayer cards to first responders, including in every Arkansas county.

Aprille Hanson
Donna Saldana, parishioner at St. Joseph Church in Conway, stands by her prayer wall, filled with patches from law enforcement and first responder departments throughout the state and prayer intentions. She has handed out almost 5,000 St. Michael necklaces, thank you notes and prayer cards to first responders, including in every Arkansas county.

Lining the hallway of her home, Donna Saldana proudly displays patches from sheriff, police, EMS, fire departments and other first responders throughout Arkansas, along with funeral cards and dozens of Post-It note prayer requests. Insignia coins from several agencies are displayed below a map, with each county highlighted from her travels. Names of priests, sisters and almost everyone it seems she’s come across in recent years — including the names of FEMA employees who assisted her when her duplex flooded — are displayed and prayed for each day.

Her prayer wall is a tangible reminder of the need to pray for the people in her life, but also her role as “Big Sister” to all first responders.

Since 2015, Saldana, a parishioner at St. Joseph Church in Conway, has personally delivered 4,849 thank you cards, prayer cards and St. Michael the Archangel necklaces to law enforcement and first responders in every county in Arkansas, extending even beyond the border — once in Oklahoma and Texas.

“I caught two MEMS (paramedics) … the boy told the girl that was with him, ‘That’s Miss Donna.’ As they’re following me to my car, he’s trying to tell her what he’s heard about me. Finally he goes ‘She’s the one that prays for us every day.’ And she said ‘that’s her’ and I was like oh my, tears. I was crying,” the 66-year-old said. “If that’s what I can be known for is praying for them babies and they are my babies. I tell them they’re my little brothers; I call them mean little boys because they are. They’ve asked me about the girls I said, ‘You’re talking about my sweet little precious sisters? Don’t go there.’”

“They don’t run past you, they run up to you. And they don’t leave you. They don’t give up on you. They’re there.” Donna Saldana

When she reaches 5,000 cards and necklaces, a Blue Mass in support of law enforcement will be held at St. Joseph.

A cradle Catholic born and raised in Fort Smith, Saldana grew up in the Fort Smith Police Department where her father Capt. Raymond L. Shelby served. Quick to describe him as “mean,” she soon gets quiet and serious.

“He loved his men. When they wanted him to be a captain, he didn’t want to because he said, ‘I’ll be too far away.’ He said I want to stay with my men. So we talked him into it and he was still with them,” she said. He died in 2012.

The mother of three became a widow when her husband died July 13, 1981, while serving in the U.S. Army. She was just three months pregnant with her youngest.

She moved to Conway in November 2013 to care for her sick daughter, but Saldana was soon diagnosed with breast cancer that January.

“God woke me up at 3 in the morning and showed it to me,” she said of her cancer and an ultrasound confirmed it. She had a mastectomy and still admittedly suffers from “chemo brain,” hard pressed to recall names or how many chemotherapy rounds she endured.

What sticks in her mind is the story of Jayden Witsell, a 9-year-old boy in Louisiana who handed out St. Michael medals to law enforcement.

“If that little twerp can do it I can,” she laughed, with her signature brashness mixed with love.

She began by mailing thank you cards and the necklaces, but soon got more personal. At first, she was terrified about approaching officers.

“I don’t call ahead. I’ll just jump out of my car and run to them,” she said, calling it “PoPo Hunting.” “Like I tell everybody, this is God’s mission. I just get the hugs. And that’s why I tell them — I hunt, I harass and I hug. And I’ll ask them sometimes, ‘Did I harass y’all’ and they’ll say, ‘No’ and I’ll say, ‘Get back over here.’”

But aside from all the ribbing, Saldana is serious about her mission. Each card is hand written and numbered, a blank space for the officer’s name and she encourages them to read it when times get hard, a reminder “you are the most important person in the world to me.” K-9 officers also get medals, as well as dispatchers, priests and nuns.

A prayer card for police, EMS or firefighters is placed inside, thanks to donations from the New Life in the Spirit Prayer group at St. Joseph, and she furnishes the necklaces, with St. Michael on one side and a guardian angel on the other.

“I touch them right here,” she said, on the stomach. “You’ve got a gut feeling? That is your guardian angel. You have a split second to listen to possibly save your life.”

“With the way of the world right now, somebody taking what limited resources they have and putting it toward us, it almost makes no sense. She calls us her baby brothers and sisters. She tried to adopt me a dozen times, and claims she has. She actually does think of us as a family,” he said. “She’s one of the most caring and genuine people I’ve met and selfless.”

Saldana can’t estimate when she’ll reach 5,000 or what the next chapter will be, but her love for her first responder family will never fade.

Maria Goretti Network: A safe place for healing after abuse