After 60 years as a priest, Father Enderlin finally slows down

Since 1946, Father Joseph Enderlin worked hard building the Church in Arkansas as 'an an instrument in God's hands.' Since retiring in 2004, he continues to minister through prayer. 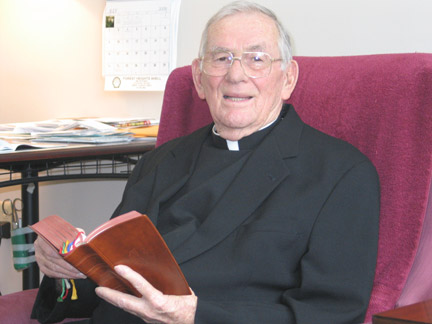 Tara Little
Father Joseph Enderlin prays the Liturgy of the Hours every day in his apartment at St. John Manor on the campus of St. John Center in Little Rock.

Tara Little
Father Joseph Enderlin prays the Liturgy of the Hours every day in his apartment at St. John Manor on the campus of St. John Center in Little Rock.

Until two years ago, Father Joseph Enderlin, 83, was so busy helping to build the Catholic Church in Arkansas he didn't stop long enough to realize he was tired.

And then, he said, "It took me at least a year to get over being tired."

He may not serve in a parish anymore, but his devotion to the priesthood is as strong as ever. In June he celebrated his 60th anniversary as a priest for the Diocese of Little Rock.

These days he celebrates daily Mass in his apartment at St. John Manor in Little Rock. His prayers continue throughout the day for the needs of the world, particularly for an end to the violence in the Middle East.

Other concerns close to his heart include the return of lapsed Catholics, and an increase in vocations and Catholic schools.

His experience is a testament to that.

Father Enderlin was born the 12th of 14 children to Amos and Rosa Enderlin on Oct. 22, 1922, in Conway. He attended St. Joseph School for 12 years until he graduated in May 1939. He entered St. John Seminary in Little Rock that fall. By the age of 18, both of his parents had died.

He said he started thinking about the priesthood in high school, influenced by a strong Catholic family, a school that fostered vocations and his older brother, Amos Jr., who was ordained in 1940.

Father Enderlin was ordained June 15, 1946, by Bishop Albert L. Fletcher at the Cathedral of St. Andrew in Little Rock. He was only 23 years old.

He was named assistant pastor at St. Mary Church in Paragould. The following year he was reassigned and named chaplain at St. Mary Hospital (now closed) in Dermott and served the Catholic missions in Warren and Hamburg. He also ministered to Catholic college students in Monticello and started a mission in Crossett.

"I had kind of a busy schedule," he said.

Every Sunday he drove 100 miles round trip to hear confessions, celebrate Mass and teach catechism to children.

He oversaw construction for new churches in Hope and Bella Vista and renovated churches in Center Ridge, Magnolia and Lake Village, where he also remodeled the school. He also facilitated the purchase of a church in Warren and five acres of land for a church in Magnolia.

"Developing the needed facilities goes a long way with developing faith and fervor," he said. "They want to proclaim and worship and you've got to give them the facilities."

Father Enderlin said he is grateful for the life he has led.

He admits it was "not an easy life," but "in my heart I knew it was for the Lord."