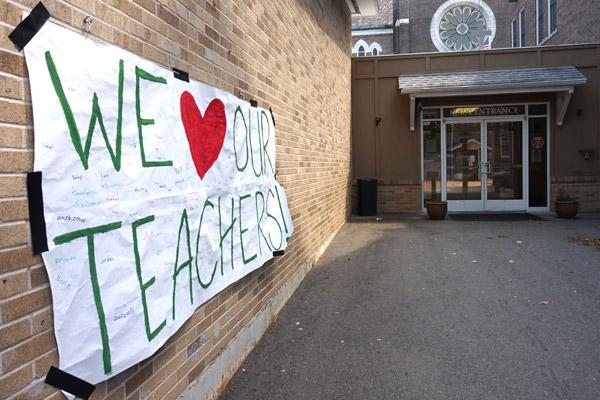 Aprille Hanson, Arkansas Catholic file
A poster signed by students is taped to the wall at the entrance of St. Edward School in Little Rock in May 2018 as the school pulled together funding to re-open for the current 2018-2019 school year.

Aprille Hanson, Arkansas Catholic file
A poster signed by students is taped to the wall at the entrance of St. Edward School in Little Rock in May 2018 as the school pulled together funding to re-open for the current 2018-2019 school year.

Ten Catholic schools have closed or consolidated in Arkansas over the past 15 years.

The funding deficit at St. Edward School in Little Rock, first disclosed in April, was a hurdle that could not be overcome in the long term.

The Diocese of Little Rock announced Feb. 27 that the school would close May 29 after 134 years of operating in downtown Little Rock, serving many minority and low-income families. The school also was an early adopter of providing services to children with special needs.

Pastor Father Juan Manjarrez announced the decision during a meeting with parents and parishioners after consulting with Bishop Anthony B. Taylor and superintendent Theresa Hall. All three spoke during the meeting Feb. 27 and listened to frustrated and disappointed parents.

In May the school was able to put together a plan to pay for shortfalls for the 2017-2018 school year and make the school financially stable for 2018-2019. Enrollment for pre-Kindergarten to eighth grade stood at 143 in 2018-2019, but the proposed enrollment for this fall was only 112. The school reached its highest enrollment in 1964 with 363 students.

When the parish was founded in 1885, the Benedictine sisters at St. Scholastica Monastery in Fort Smith opened the school for German Catholics. The sisters stayed in the school until 1992 when the first lay principal, Vernell Bowen, was hired. Bowen served the school for nine years and then was promoted to diocesan superintendent working with all Catholic schools. When Bowen retired in June, Theresa Hall was named superintendent. Hall was a teacher and principal at St. Edward for 23 years.

When the teachers and staff were told earlier on Feb. 27 about the school closing, Hall said the teachers' first concern were their students.

“When we told the teachers prior to our meeting, the teachers’ concerns were not about themselves, it was about their babies,” said Hall, holding back tears. “What about our kids? It broke my heart. That is what they are about. That shows you how much they love that school and that their calling was to be at that school.”

Hall has also spoken with parents and parishioners who don’t agree with the decision.

St. Edward parishioners, parents and the Little Rock Catholic community rallied behind the school to allow it to reopen in fall 2018. All outside funding went to a Save Our School Fund.

“The money coming in from tuition and the money still in the Save Our School Fund would not be enough to complete a full year (for 2019-2020),” Hall said. “Even if all the students were full paying.”

In the diocesan press release, Father Manjarrez said keeping the school open past May would be an “impossible financial burden” for the parish.

For the 2018-2019 school year, the school was overseen by the superintendent’s office and operated with two lead teachers and no principal. Positions for the principal and art, music, physical education, Spanish and computer teachers were not filled. The classroom teachers were retained but were not given raises. Two people came forward to volunteer to provide library and music classes.

“When I would walk into that school, you could not tell there was not a principal on staff. Everybody was pitching in,” Hall said. “That just loving family atmosphere. It was amazing.”

In the end, Hall said the school did not have enough money to be financially viable. Three factors came into play:

The school hosted its annual It Takes a Village fundraiser March 2 with all proceeds going toward the 11 full-time teachers and five staff members, who didn’t have raises this year. Hall said money remaining in the Save Our School Fund will also allow the school to pay its teachers through their contracts, which end in July.

Any funds remaining in the SOS Fund will be used for scholarships for students who qualify to attend other Catholic schools, Hall said.

Ten Catholic schools have closed or consolidated in Arkansas over the past 15 years.

St. Edward School in Little Rock to close in May