Priests, faithful talk about their life-changing experiences thanks to confession 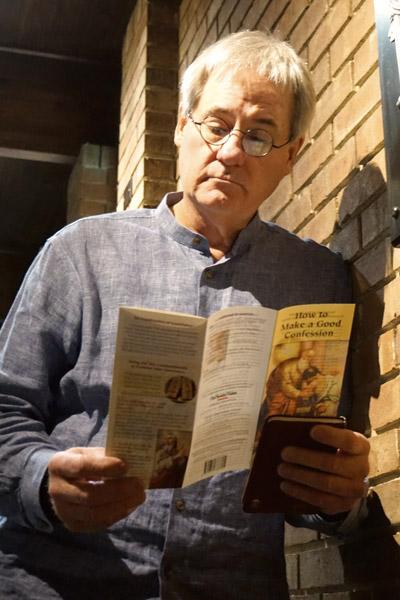 Aprille Hanson
Larry Witherspoon stands outside the confessional at Our Lady of the Holy Souls Church in Little Rock reading a pamphlet on how to make a good confession. Many parishes have similar materials available.

Aprille Hanson
Larry Witherspoon stands outside the confessional at Our Lady of the Holy Souls Church in Little Rock reading a pamphlet on how to make a good confession. Many parishes have similar materials available.

The seven sacraments of the Catholic Church are tangible signs that create an inward grace. From the happiness of marriage to the hope flowing from anointing of the sick, each is a gift from God.

But for many Catholics, confessing their sins in the sacrament of reconciliation can be uncomfortable, painful and downright scary. Those feelings of inadequacy and fear do not originate from God, making the need for confession all the more real.

“I think people picture God as kind of standing there in heaven with the divine clipboard saying, ‘I got you, I got you, I got you,’ every time we sin. So it’s like a balance sheet God keeps track of what we sin and we have to be honest about it, but that’s not the way God works,” said Father Erik Pohlmeier, diocesan director of faith formation. “Sins prevent us from being fully who we are, from being sons and daughters of God. And so what God wants with confession is to free us from whatever would keep us back. Confession is not God’s checklist because he knows we sinned, but rather it’s God’s gift to free us really to be who we’re made to be, who really deep down inside we want to be.”

During the Lenten season, priests offer more penance services and opportunities for the sacrament of reconciliation, but it’s a sacrament that should not be saved for one season within the Church.

During the Lenten season, Catholics as a whole take their normal faith practices more seriously, looking at how they are living which makes them aware of their need for God’s mercy found through reconciliation.

“The devil tempts us to sin, but his real goal is not the sin, his real goal is to separate us from God. So if we commit a sin the devil doesn’t say, ‘OK, I won.’ Then he piles on and says, ‘Now you don’t deserve God, you don’t want to tell God’ so creates all these reasons not to so the darkness stays,” Father Pohlmeier said. “So we have to work to avoid the initial sin and to keep working when we sin to avoid that excuse, fear and embarrassment that would allow that to stay and separate us from God.”

Despite the reality that everyone sins, only four in 10 Catholics — 43 percent — say they go to confession at least once a year, according to the 2015 Pew Research Center survey of U.S. Catholics and Family Life. Only 7 percent reported to go monthly, 14 percent several times a year and 21 percent said they go only once a year, the survey stated.

Father Norbert Rappold, pastor at St. Peter the Fisherman Church in Mountain Home, explained the devil hates that we are made in the image of the Creator, destroying us with sin. Confession is there for when the faithful “become less than who we are.”

While many parishes offer a penance service, bringing in extra priests for confession during Lent, Father Rappold tries to provide more opportunities for confession year round that include 30 minutes before every Mass and one hour before the 4 p.m. Saturday Mass. During Lent and Advent, he also takes one Saturday to hear confessions on the hour from 9 a.m. to 3 p.m. As with most parishes, the faithful can also call to make an appointment for confession with a priest.

From nerves to peace

Michael Broadwater, 19, knows what it’s like to be buried by sin. Although he’d go with classmates to confession while attending Christ the King School in Little Rock, “it was just knowing the priest … it can be scary confessing your sins to an authority figure.”

After eighth grade, he attended Catholic High School and avoided the confessional for about a year and half.

“Sometimes when you don’t go for a while, so much stuff piles on, it’s almost like a hopeless feeling, these things weighing you down,” Broadwater said. “I was feeling less accountable as well. The longer I waited, the farther removed I was from what I did.”

But while attending the Steubenville Youth Conference the summer before his junior year, he faced his fear.

“I was scared out of my mind. Other people seemed almost joyful. I looked at it like it was a chore, an obligation, something I had to do, where they saw it more as a gift, something they got to do, a privilege,” Broadwater said and though fear crept back up when he realized his confessor would be an archbishop, the relatable advice he was given was life-changing. “So I was able to say everything that was on my heart. That feeling afterwards, there’s nothing like it.”

Today he’s a freshman at the University of Alabama and attends confession once a week, face to face with a priest through the Catholic Campus Ministry.

“It’s a gift really. We have all this time we could be taking advantage of and so many times it’s wasted. It’s not like we turn a switch and we’re these great holy adults someday,” he said. “This is the time to prepare and form who we are as adults, to be active in faith and a big part of that is going to confession regularly.”

Larry Witherspoon, 65, converted to Catholicism from the Presbyterian faith 16 years ago and knew “it’s going to be my life and no, I’m not perfect … but I want to take this seriously.”

Part of that seriousness was going to confession. While in RCIA at Our Lady of the Holy Souls Church in Little Rock, he made his first confession and the words of the priest have stayed with him.

“He said, ‘You know when we do things it becomes history, it’s out there, you can never change that. You can’t hide it, you can do all kinds of things, but it will always be there for the rest of your life no matter how young or old you are” and others can be affected or hurt by sin, which is why the mercy of God is vital.

While reading verses from Scripture for penance, Witherspoon said, “I remember I cried a little bit, thought about it. I felt an incredible lightness and I think I felt God … To be able to come in my Church clean, I’ve been forgiven, I can move forward — that’s what happened to me.”

Witherspoon is now a part of the RCIA team at Holy Souls and still gets emotional sharing about his first confession. He goes about every four to six months, admitting it’s been about eight months now.

“When you’re getting ready to go, sit and think about it. Don’t go in there with a list. Go in there with something on your mind, something that’s been tugging at you,” he said. “Focus on something important so you can come in and do it and take it seriously.”

No one is perfect and priests often have experienced the same fears and sins of the faithful. Father Rappold admitted in his own faith journey “What’s Father going to think of me?” would cross his mind before confession. “It was my own pride; I didn’t understand who Father was yet.”

“When it’s the bigger stuff I feel the urgency … It’s a horrible feeling to feel the full weight of sin on one’s soul,” he said.

It’s why, even if confession time runs a few minutes into a scheduled Mass, he’ll take an appropriate amount of time with someone.

At the House of Formation in Little Rock, seminarian Quinn Thomas, 19, said he attends a holy hour with evening prayer and quiet contemplation before the Blessed Sacrament before going to weekly confession. There are also times when a spiritual director can also be a confessor for a seminarian. Growing up attending Blessed Sacrament Church in Jonesboro, Thomas admits he had phases of not going to confession as frequently or being really nervous to confess his sins.

“I would say it’s a really wonderful realization that none of us are expected to be perfect. We have an ideal life image of a priest as an overly pious faith (leader) on earth that never makes a mistake,” he said. “It’s really humbling or encouraging to know all of us on this path we have to go to confession, we make mistakes.”

He’s taken that personal, peaceful experience from confession to share with others, most poignantly during a confirmation retreat in October at his home parish. He found many waiting for confession who were nervous, weren’t sure exactly “What was a sin, what wasn’t” and some who hadn’t gone since their first confession.

“I felt so proud of the kids that made that sacrifice. I know it was really difficult for them. When they showed up, God showed up too,” he said, relating it to his own future. “That was really, really moving experience and formative for me to experience that fatherhood. I envision myself as a father that embraces the child that didn’t mean to mess up but they did and they’re sorry and they really want to restore their relationship with God.”

For a priest, the connection of confession and Mass is full circle, Father Pohlmeier said.

“A priest who hears confessions on Saturday before Mass, learns the struggles people are going through and the desire they have to grow and then at Mass is distributing Communion knowing this is part of the remedy for the struggle that they are facing,” he said. “So there’s this beautiful connection in my mind about that; ‘OK, you’ve gone to confession, now you’re at Mass, now you’re being fed and it’s all part of one big picture of just walking with God.’”