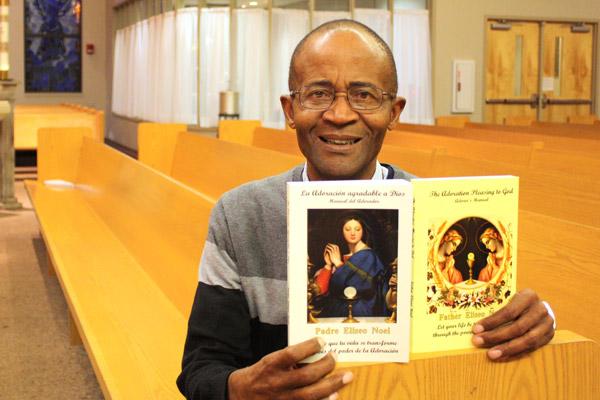 Alesia Schaefer
Father Eliseo Noel Njopmo, associate pastor at St. Joseph Parish in Fayetteville, has written his new book, “The Adoration Pleasing to God,” in both English and Spanish as a guide for Eucharistic adoration.

Alesia Schaefer
Father Eliseo Noel Njopmo, associate pastor at St. Joseph Parish in Fayetteville, has written his new book, “The Adoration Pleasing to God,” in both English and Spanish as a guide for Eucharistic adoration.

FAYETTEVILLE — Prayer leading to action: it not only describes Father Eliseo Noel Njopmo’s personal journey, but also the message in his new book.

Father Njopmo’s book, “The Adoration Pleasing to God,” is written for anyone wanting to deepen his or her faith and approach to Eucharistic adoration with the expectation of it being life transforming. The “Adorer’s Manual,” as it is also called, was written to walk individuals through the act of adoring and to help them understand the spirituality and graces received in approaching Jesus in the Blessed Sacrament.

One question commonly asked of Father Njopmo, who currently serves as associate pastor of St. Joseph Parish in Fayetteville, is how one should pray or spend the hour in adoration. Just as often, he gets the query of why adoration is important.

Answering these questions over the years has led him to write a book that could be a manual, of sorts, for individuals, youth and prayer groups, and even parishes. It is both reflective and instructive. It follows the flow of the liturgical calendar with approaching the Lord in prayer.

“Understanding the plan God has for our individual lives,” Father Njopmo said, “can only be realized through prayer and adoration.”

Father Njopmo is speaking from a place of experience. Long before he had the title “Father,” he was Jules Norbert Njopmo, a young adult living in the Republic of Cameroon, Africa, searching for answers of his own. The summer of 1986, after his high school graduation, he attended a charismatic prayer meeting several times with his sister at a nearby Catholic church. At the time, he was strongly considering becoming a Muslim. So, by the fourth meeting, angry and feeling as if he was wasting his time, Father Njopmo was already planning on never returning to these meetings.

But at the meeting that night, a prophecy uttered by a man he did not know changed everything.

“It turned my life around,” Father Njopmo said. “My path was to become a businessman because I had worked with my father since the age of 6 counting money and learning about his business. But after that night, I prayed my first prayer to Jesus asking for him to shepherd me.”

Not long after, he initiated contact with the Congregation of St. John and following graduation in 1989 left for France to begin his formation as a religious, taking the name Father Noel.

In the Diocese of Toulon in the south of France, he became a member of the Missionaries of the Most Holy Eucharist whose mission is to promote and foster Eucharistic adoration in individuals and parishes. For 10 years he traveled around the world speaking on adoration, but it is in Fayetteville that the idea for a book became a reality.

Father Njopmo first came to the Diocese of Little Rock in 2012. He spent a year in Benton and then a summer in Siloam Springs and Jonesboro. In 2015, he was appointed to serve at St. Joseph.

“I was not writing a book, but really teaching about adoration,” Father Njopmo said of his experiences and his time spent speaking to the parish community.

The book is available in English and Spanish and will be published in his native French later this year.

“To help with the formation of the kind of adorers the Lord desires is the purpose of the book,” Father Njopmo added. “I want people to know how to adore and people have been delighted to have the book to help them.”