New vicar general Father Connell is 34 years in the making

Springdale, Tontitown pastor is quiet, but can wow you with unique music stats 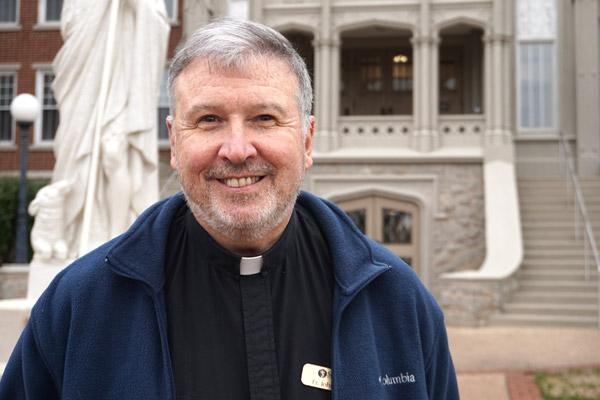 Aprille Hanson
Father John Connell smiles outside Morris Hall at St. John Center in Little Rock March 20 after a session of continuing education for priests. Bishop An-thony B. Taylor appointed him the new vicar general for the Diocese of Little Rock. He is pastor of St. Raphael Church in Springdale, the largest parish in the diocese, and St. Joseph Church in Tontitown.

Aprille Hanson
Father John Connell smiles outside Morris Hall at St. John Center in Little Rock March 20 after a session of continuing education for priests. Bishop An-thony B. Taylor appointed him the new vicar general for the Diocese of Little Rock. He is pastor of St. Raphael Church in Springdale, the largest parish in the diocese, and St. Joseph Church in Tontitown.

Father John Connell is low key, whether it’s his approach to ministry or his new role as vicar general at the Diocese of Little Rock. While he’s quick to point out, “I get things done,” it’s his contemplative approach that will serve Bishop Anthony B. Taylor well as an official advisor.

“If you know anything about me, I’m slow and steady,” he said, reflecting on the past nine and a half years as pastor of St. Raphael Church in Springdale and about a year and a half at St. Joseph Church in Tontitown. He served 15 years as pastor of St. Theresa in Little Rock, four at Holy Redeemer in El Dorado, following associate pastor roles in Mountain Home and Fort Smith since his 1985 ordination.

Effective March 1, Bishop Taylor appointed Father Connell as the vicar general, which serves as an advisor and is the highest diocesan official after the bishop. Msgr. Scott Friend, the previous vicar general, was appointed as minister to priests in addition to his role as diocesan director of vocations.

“As I told the bishop, I’m honored. I also know I have very big shoes to fill, anybody (does) after Msgr. Scott. I ask for prayers that I can serve the bishop and the diocese and the Church well,” Father Connell said.

“I also know I have very big shoes to fill, anybody (does) after Msgr. Scott. I ask for prayers that I can serve the bishop and the diocese and the Church well.” Father John Connell, new vicar general for the Diocese of Little Rock

While it wasn’t exactly a shock to be asked, given his presence on several diocesan boards already, it was hard for Father Connell not to think, “me?” he said with a laugh.

“I’m not one of those kind of guys that aspires to head anything. I just want to do the Lord’s work and that’s it,” he said. “… My whole purpose right now is just to learn this, what the vicar general for Bishop Taylor is and learn all of my responsibilities. So I’m using this time as just sort of learn everything, learn about the boards, learn about the diocese.”

At least once a month, Father Connell, 62, will make the three-hour commute to Little Rock to attend meetings of the Clergy Personnel Board, Clergy Welfare Advisory Board, Presbyteral Council, Diocesan Pastoral Council and others, including a monthly meeting with diocesan directors.

“I’m trying everything out,” in addition to mandatory commitments, he said. “They’re all sort of lumped together, which is a good thing for my schedule. And it gets me away from my work up there, gives me a chance to take some time off by driving down and go visit my mother in Hot Springs while I’m here.”

As pastor of St. Raphael, the largest parish in the diocese, it gives him “the ear of a big percentage” of Catholics in Arkansas. The parish is also one of the most diverse. More than just Anglos and Latinos, there are Filipinos, Vietnamese, Marshallese and people from Myanmar.

“I love my Masses on Sunday because I look out at the 10:30 Mass in English and I see every color under the rainbow, which I love,” he said, adding his longevity as a pastor gives him a unique perspective. “It’s getting to know my people, getting to win their trust, then to move forward knowing what their needs are and just putting them into place.”

His memory is not just impressive, easily remembering the names of those he meets, but cool, as he’s able to name the No. 1 song on the Billboard Hot 100 Chart from any week spanning almost 50 years.

He has kept a spreadsheet of all the priests’ birthdays and ages and can calculate diocesan priest statistics at the drop of a hat. Though not memorized, “if I really wanted to and the bishop said, ‘Memorize that,’ shoot I can do that within a day.”

Father Connell smiled at the thought of what his voice will be as vicar general.

“It’s too early; I’m in the learning process. Ask me in about a year,” he said, later adding that despite juggling many different hats, “I’m dedicated to my ministry and to my priesthood. I think I can do it through prayer.”