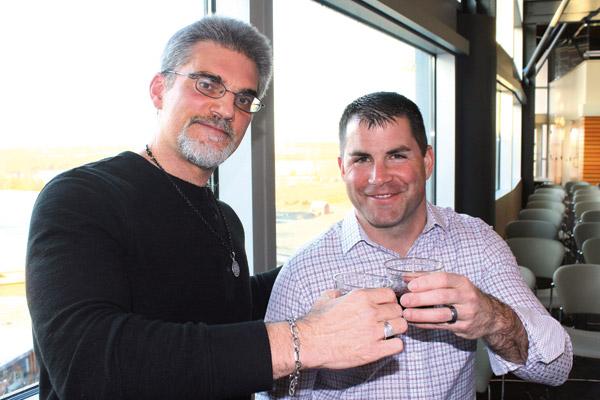 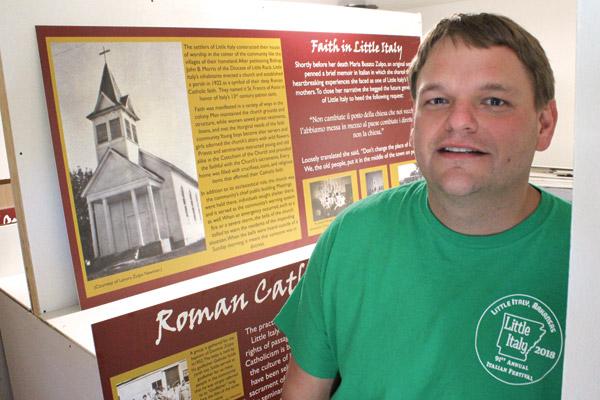 Dwain Hebda
Chris Dorer installs some story boards in the new Little Italy Museum. The lifetime resident of the historic Italian settlement is spearheading the new project, is scheduled to open in mid-April.

Dwain Hebda
Chris Dorer installs some story boards in the new Little Italy Museum. The lifetime resident of the historic Italian settlement is spearheading the new project, is scheduled to open in mid-April.

Americans of Italian descent may not dominate the population in Arkansas — according to Statistical Atlas, only 1.6 percent of the state’s residents report Italian ancestry — but you couldn’t tell by two events in April.

The opening of the Little Italy Arkansas Heritage Society Museum, also known as the the Little Italy Museum, and the Arkansas Italian Food and Culture Festival will push wine, pasta and other aspects of Italian culture and impact to the forefront. Both efforts celebrate Italians’ contribution to the state from agriculture and business to religion and the arts and both are spearheaded by Catholics bent on honoring their forebears.

“It has been a labor of love,” said Patrick Presley, co-creator of the Italian Festival and a parishioner of St. Mary Church in North Little Rock. “I wanted to find a way to honor my mother’s family who came from Italy. In particular, my great-great-grandfather, Antonio Giovanni Molina. So this was a really important, big deal to me.”

The festival, to be held on the grounds of the Clinton Presidential Library in Little Rock, is slated for April 26-28. Presley, who’d had the idea for such an event for more than a decade, finally pitched it as a fundraiser for the Boys and Girls Club of Central Arkansas, of which he is director of development and media affairs. The tie-in with the nonprofit attracted the attention of Little Rock media personality Justin Acri and the rest is history.

“Something we want to increase awareness about is that these items are very, very important and have historical significance outside of just family heirlooms.” Chris Dorer, historian-organizer for the Little Italy Museum

“It was extraordinary for us,” Presley said of the inaugural event. “Out of the gate, we had over 8,000 people in attendance and that was just a two-day festival last year. We had visitors from 17 states. It was just incredible. It surpassed our wildest expectations.”

With the addition of a third day, organizers are looking to surpass attendance and funds raised. As with last year, Presley promises lots of authentic Italian food and wine, but there’s an additional element that he’s particularly looking forward to, something made possible with the help of David Straessle, another Catholic, who is president of Relyance Bank, the festival’s presenting sponsor.

“David and I wanted to hold a Mass during the festival and make it a real family tradition,” Presley said. “We’re so lucky Bishop (Anthony B.) Taylor approved that and we will have Mass at 10 a.m. on Sunday (April 28) before the gates open. We truly feel like that’s just another way that we can cement this as the premier family festival in Central Arkansas going forward.”

About a 30-minute drive from the site of the festival, the Little Italy Museum is moving toward a mid-April opening. The story of the Italian settlement, founded by five families looking for land and a better life, is told through assembled artifacts in a renovated home donated to house the collection.

Chris Dorer, a lifetime resident of Little Italy and member of St. Francis of Assisi Church there, led the community effort to establish the museum. Dorer, who is not himself Italian, has written two books and several articles about his hometown, so taken is he with its lineage.

“[The Italian families’] story is very much mine for having grown up here,” he said. “I’m a historian by training, and Little Italy is kind of my specialty.”

Four years ago, during the community’s centennial, residents sought to become an incorporated city to preserve its heritage, but that effort was stopped in court on the grounds that area development could negatively impact the larger watershed. That move foiled, Dorer and fellow residents turned their attention to another idea as a way to keep Little Italy’s past alive.

“We thought wouldn’t it be neat to be able to highlight Little Italy’s history in a museum,” he said. “After our failed incorporation bid and all the stuff that was taking up a lot of our time, we could focus more on making sure that the history is preserved that way.”

Since then, efforts have been split between collecting funds for the museum and soliciting artifacts for its displays. In both cases, descendants of the original families and others have stepped up handsomely, and Dorer hopes the resulting collection inspires others to contribute more artifacts.

“I think once it’s open and people see that it’s a good repository for items, they will be open to offering more to it,” he said. “I know there are some hidden gems in a lot of homes, but a lot of times people look at something that’s in their house and they don’t recognize its historical value. To them it’s commonplace.”

“Something we want to increase awareness about is that these items are very, very important and have historical significance outside of just family heirlooms.”

For more information about the museum, visit littleitalymuseum.org. For full details about the festival, visit aritalianfestival.com.