Community has bonded, youth have learned more about their faith thanks to the sisters 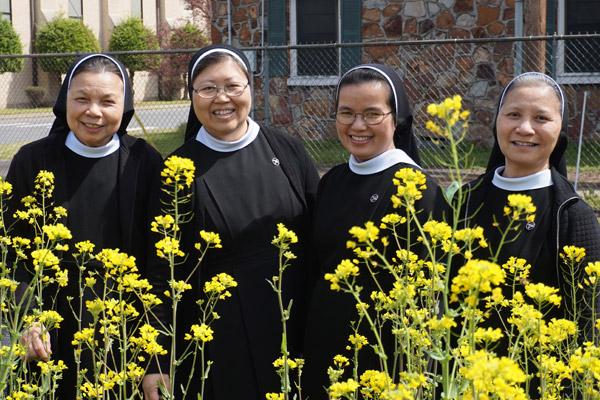 Sister Mary Imelda Khuyen Nguyen, FMSR, excitedly showed off her flower beds across the street from St. Patrick Church in North Little Rock. Strawberries, onions and flowers will continue to bloom throughout the spring and summer months, but not without a caring touch and patience, working the ground to produce new life.

“The Vietnamese here, their faith is really strong. They want it to have a community sense because of their language barrier, the older people, they wanted to have a place where they can practice their faith and be able to understand,” said Sister Mary Rose. “… They take a lot of effort in it because they want a community where they can do more activities together. More than just come to Mass and go home. They miss that in Vietnam.”

It is the first time the Daughters of Our Lady of the Most Holy Rosary, based in New Orleans, have served in Arkansas. The sisters arrived in 2017, after visiting at the request of Father Jack Vu, rector of the Cathedral of St. Andrew and pastor of St. Patrick Church. In 1895, St. Patrick Church built a school and the Sisters of Mercy came to teach the students. In 2002, the Mercy sisters moved to their retirement home in Barling. For 15 years, no sisters served at St. Patrick. Today, the sisters refer to their home as the Our Lady of Fatima convent.

Their order, founded in 1946 in the Diocese of Bui Chu, North Vietnam, has a special devotion to Mary. They immerse their lives in the mysteries of the rosary and mission work, which includes pastoral ministry, health care, education and social work, according to their website, mancoichihoa.com.

“We strive to do God’s work everywhere so it was a very good opportunity when Father Jack Vu invited our sisters to be here,” said provincial superior Sister Mary Vi Tran, 53, who was visiting from New Orleans. “… To start a program in terms of religious education and also the Vietnamese language and culture for the Vietnamese children, that was a big pull for us.”

The sisters have helped bind the Vietnamese community, with many traveling one to two hours round trip from cities like Conway, Searcy and Benton. A Vietnamese Mass is held at 10 a.m. on Sundays, followed by an hour of catechesis and an hour of learning Vietnamese. Two Vietnamese seminarians, Hong Dai Nguyen and Dan Phan, assist the children, pre-K to college age, with the native language, while also strengthening their English skills, Sister Mary Rose said. Parents prepare lunch for the children each week.

They have participated in several cultural activities, including learning a liturgical flower dance to honor Mary. Sister Mary Rose said there are many moments when she can be a comfort to students that are struggling.

“For example, one of my students said one of their friends is in the hospital now. So I told the children right then, ‘Let’s pray the Divine Mercy.’ So it kind of helped them connect to living out the rosary,” Sister Mary Rose said.

Sister Imelda said in Vietnamese, translated by Sister Vi, that by her work preparing children for First Communion and reconciliation, and bringing Communion to the sick, homebound and hospitalized, “she is living out the second mystery of the joyful mystery of the visitation, where she brings Jesus to the people. Bringing his message of love to people … and sharing Jesus, just like Mary did when she visited her cousin Elizabeth.”

For Sister Vi, Arkansas has a special significance. She came to the United States in 1975 at 10 years old as a refugee and stayed at Fort Chaffee in Fort Smith.

“I just remember the barracks. Lining up for food, going to church. For me those were pleasant memories,” Sister Vi said.

“We didn’t have money to have fresh food, so I think they gave us like canned food. We were lucky to stay there only seven months. Other people stayed there for a long time,” and others were sent back to Vietnam or committed suicide, Sister Mary Rose said. “The only thing I had is what I had on, that’s what I left with. When I came to America I only had one bag, a grocery bag, that’s all my possessions.”

While the children they serve are not refugees, they were deprived of a deeper faith formation. But the sisters will continue to help them grow in their faith.

“When I first came here I had the little ones, pre-K4 to second grade. The Our Father prayer they don’t even know. A few didn’t know how to make the sign of the cross. The parents, their faith is simple and they are open-minded and very supportive, when you need anything or ask them to help, they help. It’s just that they don’t have time” to explain the faith to their children, Sister Theresa said, adding that many work long hours. “… As the years go by, this is our second year, I really see the children are improving a lot. They know their prayers, they like school. Kids are always kids, but they are willing to learn everything.”

A Catholic you want to know: Bryan Nguyen