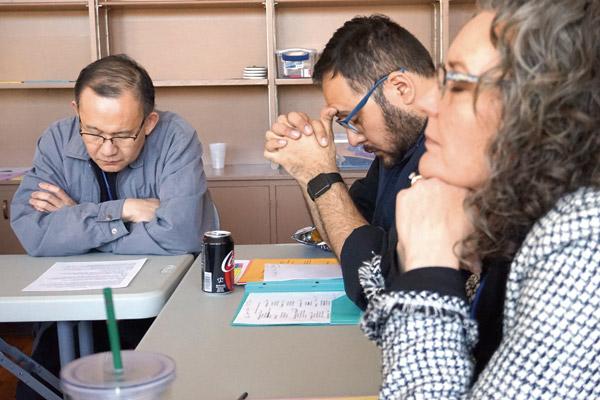 Catholics find time to connect with God on silent retreat

Many silent retreats follow the Spiritual Exercises of St. Ignatius of Loyola 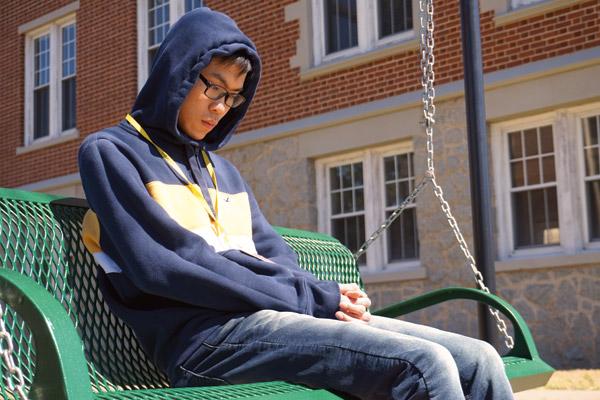 Aprille Hanson
Diocesan seminarian Minh Phong Nguyen sits in silent contemplation on the grounds of St. John Center in Little Rock during an Ignatian silent directed retreat sponsored by the vocations office March 14-17. Retreat participants, with help from a spiritual director, seek to learn God’s will for their lives.

Aprille Hanson
Diocesan seminarian Minh Phong Nguyen sits in silent contemplation on the grounds of St. John Center in Little Rock during an Ignatian silent directed retreat sponsored by the vocations office March 14-17. Retreat participants, with help from a spiritual director, seek to learn God’s will for their lives.

In David Haas’ popular hymn “You are Mine,” the faithful are beckoned to listen to God in the very first line, “I will come to you in the silence.”

But in a world of noise, distractions and stress, silence is fleeting and for some, incredibly challenging to find. Silent retreats are a time to set aside worldly distractions and focus on moving into a deeper relationship with the Creator.

“The main goal is to deepen your relationship with God. Just to experience God’s love, his unconditional love, in a very powerful way when you just put everything aside and just dedicate” time for him, said Father Rubén Quinteros, who has been on about eight silent retreats and recently led one at St. John Center in Little Rock.

“The director is helping me discern what God is saying to me. How his voice is affecting me, my feelings ... so everything is involved in discerning what is God’s will for me during this time.” Father Rubén Quinteros, retreat leader

There are no hard and fast rules when it comes to silent retreats. The most common format for silent retreats follow Ignatian spirituality, or the Spiritual Exercises of St. Ignatius of Loyola, which offers retreats in three, eight or 30 days. However, some religious orders also follow a style of silent prayer relating more to their patron saint. For example, religious that follow the Rule of St. Benedict may use Lectio Divina, a traditional Benedictine style of Scriptural reading, prayer and meditation, during a silent retreat.

The annual Ignatian silent retreat, sponsored by the diocesan Vocations Office, was held March 14-17 at St. John Center, led by Father Quinteros, director of spiritual formation at the House of Formation and pastor of Immaculate Heart of Mary and St. Mary Churches in North Little Rock. The retreatants meet with certified spiritual directors for about an hour each day in which they are given Scripture passages to read, pray with and contemplate.

“The director is helping me discern what God is saying to me. How his voice is affecting me, my feelings, my emotions, my desire in my heart, my mental process, so everything is involved in discerning what is God’s will for me during this time,” Father Quinteros said.

“The Lord takes an active part in the sessions. So we’re not talking about God, we’re talking with him. So that’s how our role is to not just listen to the directee, but also listen to God. And also to use our own knowledge we have, that we’ve learned; all that comes into play,” Msgr. Friend said.

In addition to Mass, there are also three one-hour formal prayer periods recommended each day and making time to journal. Cell phones are silenced and no talking is observed even during meals. To help remain in silence, it is suggested those on retreat avoid eye contact with others.

“It’s so fundamental to our conversation with God. Quieting ourselves helps us to move inward because it’s God who dwells at the center of our being and from there he will speak to us,” Msgr. Friend said.

When Julie Rutherford was in her mid-20s, she would go on silent retreats with her mother every year.

“I have these warm fuzzy memories of when I was much younger,” attending silent retreats, said the 75-year old parishioner at St. Augustine Church in Dardanelle. “I think the Lord was calling me to do this. It sounded like a good excuse for a second honeymoon with the Lord.”

A professed introvert, Rutherford said the silence and avoiding others was a relief from societal pressures, but the nervousness was instead if God was “going to show up” in a special way. It was the second year she attended the diocesan Ignatian retreat. This year, she received clarity, a firm resolve to understand the role she serves in her family.

“It’s kind of like a husband and wife going away for three days to be reconnected, leaving kids with the babysitter. Sometimes you just need to do that to listen to each other … If you’re having a conversation with the Lord there’s nothing to interrupt it.”

It was the first time for Paulina Vazquez, 26, a parishioner at St. Andrew Church in Danville, to experience God’s love during a silent retreat.

“I usually try to be surrounded by noise,” she said, talking to others, listening to music, laughing with friends. “Especially during Lent, it reminded me of Jesus going into the desert. That’s how I felt when I first went there. I wanted to encounter God like Jesus did in the desert.”

Her confession during the three-day retreat changed her life.

“I actually saw Jesus’ face in the priest I was confessing with, smiling back at me and embracing me with love, that was the most special. It was one of the best confessions I’ve ever had,” Vazquez said. “It was very powerful because after that I received a lot of peace. I didn’t know that’s what I was looking for, but I think that’s what God sent me over there for … after that silent retreat, now I wake up and want silence. I do my morning prayers, night prayers. There’s an encounter with God every day.”

Since the idea of prolonged silence goes against the reality of everyday life, the struggle to quiet a heart is not an easy feat. Scott Gammill, a parishioner at St. Raphael Church in Springdale, saw the change of heart his wife Monica had experienced through retreats and prayer. They decided to go on the Ignatian silent retreat in Little Rock last spring, a first of any kind of retreat for him. Though the 15-year convert attended Mass regularly, volunteered at his parish and went to confession occasionally, his heart was not prepared for the struggle of a silent retreat.

“There were any number of things that were hard. I wasn’t sure what to think about being by myself with my thoughts. Something that was supposed to be simple I found a way to make it complicated. I really struggled with letting go and letting God take control,” Gammill, 55, said. “It became apparent after the first meeting with my spiritual director that we weren’t going to be using the Bible as a textbook and it didn’t have anything to do with being better or making a higher grade than someone else.”

But the 2018 retreat did not end for Gammill after returning home. He continued to read Scripture and chip away at the fears of letting God take control. It was during this time of enlightenment that God revealed to him that his drinking had become out of control.

“No person or anything told me to go to AA (Alcoholics Anonymous), God did,” said Gammill, who has been sober for about 11 months. “… It got me started down the path of recognizing that and being able to learn, to listen, that he was talking to me.”

Today, he is a Eucharistic minister and attends weekly adoration. Gammill again attended the Ignatian silent retreat this year.

“This time I was calm and felt peaceful from the beginning of the retreat. I’m still learning and honestly still struggle with some of the same things that I did in the first retreat. What’s different now is that Jesus has not only placed me in a position to help others, but he has given me the grace to desire to help them,” Gammill said.

Go alone to see the benefits of ‘fruitful silence’